Tinos ( Greek Τήνος ( f. Sg. )); ancient Greek transcription Tēnos ; also occasionally in antiquity: Hydroessa and Ophioussa ; is a Greek island southeast of Andros , which belongs to the Cyclades archipelago . The island is criss-crossed by mountains along its entire length, of which the Tsiknias is the highest at 727 m. The island has about 50 villages and has 8,636 inhabitants (2011).

On January 1, 2011, the three municipalities on the island that had existed since 1997 were merged to form the municipality of Tinos. Tinos also forms the Tinos regional district of the South Aegean region, which is represented in the regional council by one member.

In Greek mythology , Tenos is the birthplace of the wind god Aiolos (Aeolus) .

Stephanos of Byzantium (621.10) and Pliny ( Naturalis historia 4.65) report that the island was called "Hydroessa" by Aristotle and "Ophioussa" by others. As allies of the Athenians, the Tenians fought against the Persians at Plataiai ; ancient Tenos belonged to the First and Second Attic League .

In 1715 Tinos came under Ottoman suzerainty again. The Ottoman however rule had only a formal character, the island had many privileges in economy and trade. On March 31, 1821 , the village of Pyrgos on Tinos was the first place in the Cyclades where the Greek flag was flown. Tinos became part of the new Greek state.

On January 30, 1823, a picture of the Virgin Mary was unearthed in Tinos town , the site of which had been given to a nun by the Virgin Mary . The psychological impact of this find was tremendously strong. The battle against the Turks was finally won and the place has been considered "holy" ever since. (see below under religion)

Tinos is considered the cradle of modern Greek sculpture, artists of the 19th century such as Nikiphoros Lytras and Nikolaos Gysis were born here. The Malakrates brothers, who opened Athens' first marble workshop in 1835, were also from Tinos. Several small museums show the history of sculpture on the island and its representatives. Numerous Greek artists live on Tinos or have a temporary residence there.

About half of the island's inhabitants are Roman Catholic, the other half Greek Orthodox. The center of the Catholics is Exobourgo, a rocky point in the interior of the island. Xinara is the seat of the Archdiocese of Naxos, Andros, Tinos and Mykonos . The Catholic faith was brought to the island by the Venetians. The Orthodox Church owns large parts of the island and, among other things, prevented the further expansion of pubs.

Tinos is the most important Marian pilgrimage site in Greece and is often referred to as "the Greek Lourdes ". Throughout the year, especially on March 25th and on the Assumption Day on August 15th (a public holiday in Greece ) tens of thousands of pilgrims flock to the pilgrimage basilica of Our Lady (Panagia Evangelistria) to venerate the miraculous image of Mary .

In the summer and autumn of 1822, the Orthodox sister Pelagia (baptized Lucia) Negreponte of the Kechrovoúni monastery was supposed to be St. Appeared to Virgo several times in his sleep. In these visions, Our Lady referred to a place on the outskirts of Tinos-Stadt at that time, where an icon of Mary was excavated on January 30, 1823 . The pilgrimage basilica was built on the site in the same year. Numerous miracles are attributed to the statue of Mary, which is now adorned with precious stones, including the end of the plague epidemic that raged on the island in 1823. Many more cases of miracles and healings have since been documented. Sister Pelagia was canonized by the Orthodox Church.

Other locally venerated saints are St. Agapitos , after whom the place Agapi is named.

Tinos has a Mediterranean climate with dry warm summers and mild rainy winters. The island is exposed to strong winds all year round. The prevailing wind in summer is called Meltemi . This can sometimes become so strong that ferry traffic has to be stopped. Due to the wind, the temperatures are usually bearable, so that it is rarely extremely hot in summer. In winter, the sea , which is usually over 17 ° C, prevents extremely low temperatures. 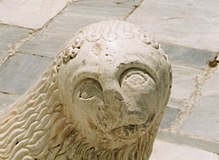 Lion sculpture in the forecourt of the Marienbasilika

Sculpture in the courtyard of the Marienbasilika

In addition to the pilgrimage basilica of Our Lady, Tinos town houses a small archaeological museum high above the harbor . Small mountain villages, built on steep slopes, offer a good view over the island to the Aegean Sea. Well over 1000 churches and chapels are evidence of the piety of the islanders. As everywhere in the Cyclades, there are also many windmills on Tinos . The pigeon houses from the Venetian period are unique , square towers with geometric patterns made of interrupted masonry on the upper floor. At that time, carrier pigeons were widespread and the island's central location made it an important post office . Pigeon meat is still considered a delicacy today, the manure is an important fertilizer. Volax lies in a landscape of egg-shaped granite rocks (wool sack weathering), some of which are used by free climbers. Bathing beaches are mainly to the west of the main town. In Koumala the beach is blocked by numerous illegally built huts. 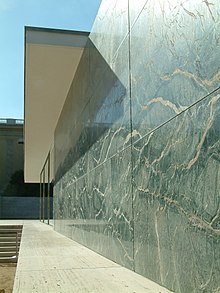 The Tinos verde , used by Mies van der Rohe for the construction of the Barcelona Pavilion , 1929

Tinos is not particularly fertile, but it can be used for agricultural purposes when building terraces . The most important economic factor today is tourism - not least in the form of pilgrimage tourism. The island is mostly visited by Greek tourists, especially from Athens, and pilgrims. Tinos offers hiking and swimming opportunities, and alternative forms of vacation (sculpture, ceramics, dancing, diving) are offered. The inhabitants live mainly directly and indirectly from tourism and practice agriculture (vegetables, artichokes, lemons, cattle breeding). Capers are also harvested locally.

Tinos has natural stone deposits of white marble ( Pyrgos ) and green serpentinite , a serpentinite breccia ( Verde Tinos ), which was occasionally but incorrectly called Verde antico . Other mineral raw materials are talc , asbestos and chrome iron ore . The dark green serpentinite from Tinos was used in the Louvre and Buckingham Palace , among others .
The center of marble carving is Pyrgos north of Isternia. Exo Meria marble quarry is still in operation today.

The Vrekastro rock on Agios Fokas beach near Tinos town

The yacht and boat harbor of Tinos town

The island has a dense road network. There are regular ferry connections to Mykonos (40 min.), Piraeus (5 hours), Rafina b. Athens (4 hours), Andros (2 hours) and Syros (45 minutes). Ferries to the above-mentioned destinations leave Tinos several times a day. For several years now, high-speed ferries ( catamarans ) have been operating from Piraeus and Rafina, which take about 2 hours for the crossing.

Personalities of the island