The title of this article is ambiguous. A list of the abbreviations with the same name can be found under IOS .
f9 f10 f8

Ios ( Greek Ίος [ ˈiɔs ] ( f. Sg. )) Is a Greek island in the Aegean Sea that belongs to the Cyclades . At the same time, it forms a municipality within the South Aegean region . While Ios still had around 3500 inhabitants in the 19th century, 2024 people (2011) live here permanently.

Exact data on the first settlement of the island cannot be determined, but several archaeological grave finds near Manganari in the south point to as early as the 3rd millennium BC. Existing settlements. The Greek settlement took place around 1000 BC. BC Ios belonged in the 5th and 4th centuries BC. To the Attic League , then in the 3rd century BC. The Nesiotenbund . Evidence of its own coinage was found on the island, which had existed under Roman rule.

Ios was conquered several times by various armies and rulers. First the Romans took command, after the division of the Roman Empire the island belonged to the sphere of influence of Byzantium .

Then it became part of the Duchy of Archipelagos and in 1269 it was recaptured by the Byzantine fleet under the command of Licario . However, a few years later it was snatched from the Byzantines by the Venetian Dominico Schiavo . After his death it fell back to the Duchy of Archipelagos in 1322. After Duke Jacopos I (1397–1418) carried out an inheritance division, his brother Marco I Crispo (1397–1450) received the island of Ios, which his descendants kept until 1508. As a dowry from Adriana, the only daughter of the last ruler of the island, Ios came into the possession of Alessandro Pisani in 1508 . The rule of the Italian dynasties ended in 1537 when the island was annexed to the Ottoman Empire by the notorious Turkish general and pirate Khair ad-Din Barbarossa . The island has been Greek again since 1832.

Various legends of the island report that the mother of the ancient poet Homer was born on Ios and that he himself is said to be buried there. His grave was assumed in ancient times not far from the northern tip of the island in the area around Plakoto. However, when the tomb was dated, a time difference of 600 years to the presumed year of Homer's death was found. In 1771 the Dutch Pasch van Krienen claimed to have found Homer's grave. When the grave was opened, he claims to have seen a skeleton crumble into dust in seconds. Van Krienen had the stone slabs from Homer's tomb brought to Livorno , where they then mysteriously disappeared.

The small fortified grave complex of Homer on a hill on the north coast of the island is a popular destination for visitors to the island and is probably one of the reasons why the results of the dating are often kept secret. The myth of the famous poet was extensively exploited by the islanders in ancient times. She was encouraged by the travel writer Pausanias . Legend has it that Homer stopped on Ios while passing through to Athens ; he died a little later from grief that he was unable to solve a riddle that the local fishermen had asked him. Homer's head appeared on the local coinage, and one month was named after him in the island calendar in his honor. 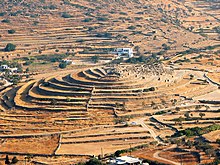 The settlement of Skarkos (Σκάρκος) is located on a hill in Kambos, the most fertile area of ​​the island about one kilometer northeast of the port.

From 1986 to 1995, under the archaeological direction of Marisa Marthari, a Bronze Age settlement was established from around 2700 to 2400/2300 BC. Excavated. The settlement extends over 1.1 hectares and is still the largest and best preserved settlement of the early Cycladic Keros-Syros culture , which was inhabited by 200 to 300 people. For the first time, closed house complexes were uncovered, which suggests that the settlement was probably abandoned as a result of an earthquake as a result of a disaster.

It is said that there are 365 churches and chapels on Ios, corresponding to the number of days in a year.

In the north of the island are the ruins of the Venetian castle Paleokastro from the 15th century.

According to the 2011 census, the community has 2024 inhabitants, almost 90% of whom live in the main town of Ios.

The following uninhabited islets also belong to the municipality of Ios:

Although the island has a mountainous character, compared to other islands of the Cyclades it is particularly fertile in the valleys of Epano Kambos and Kato Kambos in the northwest, Manganari in the south, Psathi and Agia Theodoti in the east. Since the 6th century BC The cultivation of terraces (πεζούλες) with low dry stone walls (ξερολιθιές) on the island is occupied. Until a few decades ago, the island's economic basis was mainly agriculture with the cultivation of grain, olives and wine as well as cattle breeding.

Today, however, Ios produces only a small number of agricultural products, mainly honey and goat cheese as well as potatoes, legumes and barley for cattle feed for its own use.

Since the 1970s, Ios has experienced a boom in international tourism, which has kept the population constant at around 1500 and halted the strong rural exodus. On some days in midsummer it happens that up to 10,000 strangers are on the island. Predominantly younger people from all over the world enjoy the beautiful beaches (especially the Milopotas) as well as a distinctive and particularly revealing nightlife. Apart from tourists, Ios is only sparsely and sparsely populated, for example in the hinterland of the equally beautiful beaches of Manganari, Kalamos, Psathi and Theodoti.

The local administration has been trying to develop the island since the mid-1990s. She has succeeded in raising EU funds for road construction projects, but also for building a theater. The German architect Peter Haupt, who died in 2003, built it in an imposing location above the village of Chora. So far, however, cultural events have only rarely taken place there. It seems questionable whether road construction will succeed in decentralizing the island's tourist structure. So far, life has been concentrated on the spacious harbor, the picturesque and car-free Cycladic village of Chora and Milopotas, the largest beach on the island connected by public transport.