from Wikipedia, the free encyclopedia
This is the spotted version , flagged on May 9, 2020 . There are still template and file changes that need to be viewed.

The title of this article is ambiguous. Further meanings are listed under Mykonos (disambiguation) .
f9 f8

Mykonos ( Greek Μύκονος [ ˈmikɔnɔs ] ( f. Sg. )) Is an island in the Cyclades in the Aegean Sea . Together with Delos , the uninhabited island of Rinia and some small islets, it forms a municipality and at the same time the regional district of Mykonos ( Greek Περιφερειακή Ενότητα Μυκόνου ). He sends two MPs to the Regional Council of the South Aegean Region . The island has an area of ​​86.125 km². It is inhabited by 10,134 residents. The capital of the island - the Chora  - is also called Mykonos. The island is one of the most popular Greek islands with mass tourism .

Satellite image of the island of Mykonos

Mykonos is a Greek island in the Aegean Sea. It is located (with a slight deviation to the south) about 160 km east of Athens.

Mykonos' neighboring islands are Delos in the west, Tinos in the north and Naxos in the south.

The municipality of Mykonos is divided into two districts with 20 villages, settlements and islands.

According to legend , Heracles defeated giants whom he threw into the sea. When they turned to stone, the island of Mykonos was formed. The island was named after Apollo's grandson, Mykon.

In ancient times, the neighboring island of Delos, only two kilometers away, was an important cultural and religious center. According to tradition, it was forbidden to be born or to die there. It is therefore reasonable to assume that many people traveled back and forth between the two islands. During this time, the island's culture was also influenced by various other peoples and their traditions. In 1207, like most of the Cyclades, the island came under the rule of the Ghizzi dynasty. Its last ruler, Georgios Ghizzi, gave the island to the Republic of Venice 100 years later . In 1537 Mykonos, like many other Cycladic islands, became Ottoman . During the War of Independence , it made a major contribution to the liberation in 1830, both financially and in terms of armament. It took several decades for the economy to recover from these dire events. In the inter-war years, tourism began, which still supplies the island economically today.

A cruise ship in the port of Tourlos, the new port of Mykonos

The island has been a well-known and popular tourist destination for homosexuals since the 1960s. Large travel companies such as Neckermann advertise hotels for gays and lesbians . One of the most popular beaches for gays was also named after the Ralf König comic Super-Paradise.

A new port was built for ferries and cruise ships approx. 2 km north of the capital. Two cruise ships can moor at the pier, other cruise ships have to anchor off the coast.

The museum was built in 1902 near the port of Mykonos Town to display finds from the necropolis (city of the dead) Delos'. The construction project was financed by the Ministry of Education and Archeology in Athens. Today the museum exhibits the following finds:

Particularly noteworthy is a relief pith from the 7th century BC. With the oldest known illustration of the Trojan horse .

This was set up in 1958 in a house from the 18th century. It is located on the Venetian Mountain. Everyday and everyday objects as well as ship models and cannons from the war of the 19th century, i.e. the time during and after the revolution, are exhibited there. In addition, the living situation at this time is conveyed using a simulated kitchen and a bedroom.

This museum was opened in 1985 after two years of construction to recreate the Greek shipping tradition and the functioning of merchant ships. The associated board of trustees was created by George M. Drakopulos, who received an Athens award for founding the museum and the World Ship Trust's Award for significant achievements.

This unique St. Mary's Church is known because it consists of five actually independent white chapels, which over time have grown together to form a complex. The first chapel, Agii Anargyri, dates back to 1425. The resulting sacred building is a very popular photo motif. Since the church is in danger of collapsing, it cannot be viewed from the inside.

This monastery was founded in 1542 with the name “Eisodia tis Panagias” (“Church of the Appearance of the Virgin Mary”) in order to keep and venerate an icon that was found in the Turlos region. On August 15th ( Assumption of Mary ) there is a festival for the island saint on Mykonos. There is also a small museum in the monastery that exhibits vestments, icons from the Byzantine period and the first church bells. 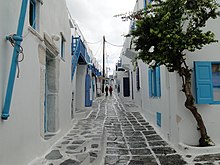 The architecture typical of the Cyclades is particularly easy to see in Mykonos Town. Their hallmarks are white houses with flat roofs, colored wooden doors and windows and balconies decorated with flowers, and the steep cobbled streets are also striking. The exception here is the Little Venice district, which was built in the Venetian style on the beach promenade.

On a small headland on the outskirts of Mykonos town, called Ano Mili, the island's landmark, the Kato Mili , is about 10 m above sea level . Ten windmills used to process the grain that was brought in from the area. Five are still preserved, the sixth is missing the roof and wind turbine. Nearby is the agricultural museum, which exhibits, among other things, a stone wine press and a water reservoir.