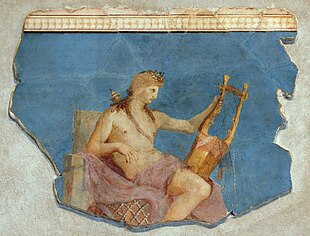 Apollo with kithara (fresco, house of Augustus , today in the Palatine Antiquarium in Rome , approx. 20 BC)

Apollo ( ancient Greek Ἀπόλλων , Latin Apollo , German also Apollo ) is in Greek and Roman mythology the god of light, healing, spring , moral purity and moderation as well as prophecy and the arts , especially music , poetry and the Singing ; he is also the god of healing and archers. As the son of the father of gods Zeus and the goddess Leto (Latin Latona ) conceived in Didyma in Asia Minor , he belonged, like his first-born twin sister Artemis (Latin Diana ), to the Olympic gods , the twelve main gods of the Greek pantheon . The sanctuary in Delphi , the most important oracle site of antiquity , was dedicated to him.

Apollo statue with bow and arrow (broken off here), now in the Ashmolean Museum , Oxford

The origin of the Apollo cult is believed to be in Asia Minor. The etymology of the name Apollon is unclear. Possibly it meant in Greek “herald”, “destroyer” or “destroyer” or “disaster repeller”. In the Iliad , Homer also called him Smintheus (that is, "the rat eater") and "the one who met from afar". As Phoibos Apollon ("the shining one", Latinized: Phoebus ) he was also equated with the sun god Helios . Other names were Boëdromios , "the one who rushes to help with a battle cry," and Loxias .

Pythagoreans and Platonists , who particularly venerated Apollo, were convinced that his name had a philosophical meaning. They interpreted it as A-pollon (“not many”), composed of a- (“not”, alpha privativum ) and pollón (“a lot”). In this they saw an allusion to the one , the highest, absolutely transcendent principle, the opposite of plurality. According to this interpretation, which the Neo-Platonist Plotinus ascribes to the Pythagoreans, “Apollon” is the god's name of the One. This etymology of the name Apollo is not expressly attested in Plato's works , but he seems to have known it. In research it is assumed that it was part of his “ unwritten teaching ”, which was only conveyed orally .

As the protector of the arts and music, Apollon presided over the nine muses (epithet Musagetes) and was at the same time a god of atonement. He was also regarded as Apollon Epicurios , the god of healing and as such saved the inhabitants of Figalia from a plague epidemic. But it also played a role in other areas of life: it brought disease, death and annihilation (like the Babylonian god Nergal ) and sent the plague into the Greek camp in the Trojan War . At the same time he brought about rescue from danger (e.g. in the function of Apollon Smintheus , the “destroyer of mice” or Apollon Lyceius as protector of the herds from the wolves). As the god of healing, prophecy and the oracle sites were associated with him. Through the death of Python , Apollon acquired his visionary abilities and was also called Apollon Pythios , in his honor the Pythian Games were celebrated.

He could bestow the gift of prophecy on mortals such as Cassandra , Priam's daughter . In the Trojan War he was on the side of the Trojans and intervened in the battles with targeted bow shots; as an avenger he sent the plague with his arrows into the camp of the Greeks, because they had captured and enslaved the daughter of a priest of Apollo.

Apart from reports that are typical for the character, such as the musical competition with the shepherd god Pan , Apollo appears in a conspicuously large number of stories told by him as avenger or killer. So he killed the Niobids and the giant Tityos , who wanted to rape his mother; he killed (and skinned) the satyr Marsyas , because he was said to make more beautiful music than the god. He ordered Orestes to kill his own mother Clytaimnestra to avenge the murder of his father Agamemnon . The Erinyes , who did not tolerate this, then beat Orestes madly, but Apollo successfully defended him against them and Clytaimnestra's ghost before the Areopagus in Athens.

The first act of Apollon, who was born in Lycia or on the “floating island” Delos , was the killing of the snake Python, the enemy of his mother Leto . Apollon hit Python with an arrow. Python fled seriously injured to the oracle of mother earth in Delphi , who was named in honor of Delphyne, the Python's wife. Apollo followed Python into the shrine and killed him next to the sacred crevice. Since this serpent, which possessed extraordinary prophetic powers, was a child of the Gaia , he had to go to Tarrha in Crete for atonement and there subject a purification ceremony.

Once Apollo even dared to rebel against his father Zeus : When this Apollo's son Asclepius had killed, Apollo took revenge by murdering the Cyclops . As a punishment for this act, he had to work in the sheepfold of King Admetus of Pherai or tend his cows. Since he had approached Admetus as a stranger and had been welcomed in a friendly manner, he made sure that his animals gave birth to twins and helped him to win Alcestis , the daughter of Pelias . In addition, he helped him against Thanatos (death) when he was about to die.

At the onset of winter, Apollon flew to the "land of the Hyperboreans " in a wagon pulled by swans . H. the land beyond the north wind.

As a representative of high musical culture, Apollon appears in the music competition with Pan .

Apollon and Daphne , painting by Antonio Pollaiuolo (around 1475) 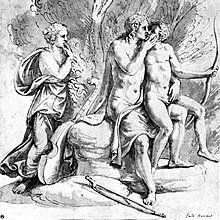 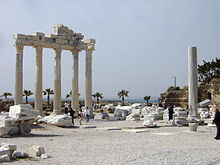 Ruins of the Temple of Apollo in Side

The female lovers of Apollo and his descendants with them, as well as his male lovers or favorites were different sources, among others:

Apollo with the ears , painting by Georg Friedrich Kersting (1822)

Numerous temples were dedicated to Apollo (see list under Temple of Apollo ). These include the oracle sanctuaries in Delphi and Abai .

Since Apollon was assigned to the arts, he has appeared again and again in poetry and the visual arts since ancient times. An example from 1914 is Giorgio de Chirico's painting The Song of Love ( Le chant d'amour ). It shows the mysterious combination of an Apollo bust attached to a house wall and a rubber glove. A train steams in the background.

The Apollo Peak in Antarctica and the asteroid (1862) Apollo are named after him.

Compilation of the iconographic sources