The title of this article is ambiguous. Further meanings are listed under Agamemnon (disambiguation) .

Head of Agamemnon (section from a black-figure wine jug, approx. 520 BC, Louvre in Paris)

Agamemnon ( ancient Greek Ἀγαμέμνων , modern Greek Αγαμέμνονας , 'very energetic' ) is a ruler of Mycenae in Greek mythology and the leader of the Greeks in the Trojan War .

Agamemnon was the son of Atreus (and thus belonged to the Atrid family ) and the Aërope . He was descended from Tantalus and was therefore subject to the curse of the Tantalids . His wife was Clytaimnestra . According to a late version, which was probably first composed by Euripides , Clytaimnestra was previously married to Tantalus, the son of Thyestes or Broteas , whom Agamemnon killed according to this version. With Clytaimnestra, Agamemnon was the father of Iphigenia , Elektra , Orestes and Chrysothemis . As commander in chief of the Achaeans , he led the Greek princes against Troy .

The mythical occasion of the Trojan War was the kidnapping of the wife of his brother Menelaus , the beautiful Helen , to Troy through Paris . After the army and the navy had been gathered, they could not leave because Artemis sent head winds after Agamemnon had killed one of her sacred hinds in Aulis . To soothe the winds, the seer Kalchas advised him to sacrifice his daughter Iphigenia to the goddess. At the last moment, however, Artemis took pity on him, put a doe on the altar instead and abducted Iphigenia to Tauris .

As the upper king and general of the Achaeans, Agamemnon uses the name Anax andron , in English lord of men . Agamemnon, whom the Iliad sometimes makes appear arrogant and selfish, led the Achaeans with strength, but he seemed to lack foresight. Above all, his quarrel with Achilles brought the Achaeans into severe distress: Agamemnon had Chryseis, the daughter of the Apollo priest Chryses, as a gift of honor. When the priest wants to buy Agamemnon's daughter out, he is threatened and chased away by Agamemnon, whereupon Chryses prays to Apollon that he should punish the haughty Achaeans. Therefore, Apollo causes a terrible plague in the camp of the Greeks with his arrows, and in the council of war of the Greek princes the seer Kalchas blames Agamemnon for the plague on Achilles ' instruction, who grinds his teeth to return his booty. Since he, as the upper king, cannot be without a gift of honor, he procures a replacement from one of the princes. By stealing the war trophy of Achilles, the virgin Briseis , who was guilty of loss , he plunged the Achaeans into a crisis, as Achilles subsequently withdrew from the fight, hurt. In the 11th song, he has his aristically : He is shown dressed in his armor and then as an irresistible fighter who kills many Trojans.

After ten years of siege , Troy falls. On the way home, Agamemnon is blown by a storm on the island of Crete , where he founds three cities. He names two of them after places in his homeland, and gives the third the name Pergamon in memory of his victory. Shortly afterwards he returned to Mycenae with the Trojan seer Kassandra . There he is stabbed to death by his wife Klytaimnestra and her lover Aigisthus in the bathroom  - as punishment for sacrificing Iphigenia. According to a widespread version of the legend, Kassandra is also murdered on the same train; according to another, Clytaimnestra spared Kassandra. Years later , Agamemnon's son Orestes will kill his mother because of the murder of his father .

The Spartans saw themselves as descendants of Agamemnon, with which they established their leading role in Greece. For this reason the bones of Orestes were transferred to Sparta. In modern research, the opinion is also held that Agamemnon was originally considered the king of Sparta and held a dual kingship with Menelaus. Only the Homeric epics assigned him the role of King of Mycenae. 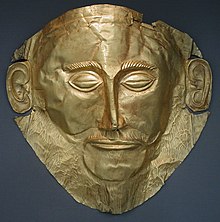 In 1876 Heinrich Schliemann discovered a golden mask during excavations in Mycenae, which he assigned to the mythical Agamemnon. According to today's knowledge, this gold mask of Agamemnon dates from the 16th century BC. BC, about three centuries before the time assumed for the eventual historical core of the sagas about Troy.