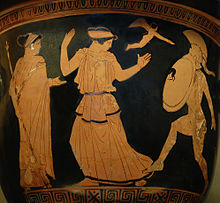 Helena between
Menelaus and Aphrodite
Detail of an Attic red-figure vase
approx. 450–440 BC Chr.

Helena , Latinized from ancient Greek Ἑλένη Helénē , is a figure in Greek mythology . Her kidnapping by the Trojan prince Paris sparked the Trojan War .

In Greek mythology, Helena was the daughter of Zeus and Leda, born from an egg . Leda was seduced by Zeus in the form of a swan, whereby she became the mother of Helena and the Dioscuri Castor and Polydeukes (Roman: Pollux ). Clytaimnestra was considered the daughter of Leda and Tyndareus ; she was a half-sister of Helena.

According to other traditions, Helena and the Dioscuri were born from one or two eggs, or Leda tended the egg of Nemesis and Zeus , from which Helena arose, who Leda raised like her own child. Pausanias tells of the birth of the Dioscuri on the island of Pephnos (western Mani ). The Spartan poet Alkman is also said to have written about it. The poet Lycophron uses the adjective “Πεφναία”, meaning “those born on Pephnos”, when referring to Helena.

Apulian - red-figure pelike with the birth of Helena from an egg. On the left Helena's mother Leda, on the right a shepherd with a staff, above Eros with a wreath; Attributed to the painter of Athens 1680 , Antikensammlung Kiel .

Evelyn de Morgan :
Helen of Troy ( 1898 ).
The mirror , the beaking doves and the Feast of Troy mark them in the style of the Pre-Raphaelites as femme fatale .

Helena was considered the most beautiful woman of her time. Her beauty is said to have been so great that every man who saw Helena wanted to own her. As a teenager she was kidnapped by Theseus and Peirithoos to Aphidnai in Attica and freed by the Dioscuri , her brothers.

Many Greek princes competed for them. Her earthly father feared the enmity of all rejected if a suitor was preferred and therefore, following a advice from Odysseus , made all applicants for Helena swear that they would recognize Helena's election and defend it against everyone - a typical justification for the alliance of almost all Greek kings against Troy . Helena chose Menelaus , Prince of Mycenae and thus later King of Sparta , to whom she gave birth to her daughter Hermione .

In the quarrel between the three goddesses Hera , Aphrodite and Athene over the apple of Eris , she was promised by Aphrodite to the Trojan prince Paris and agreed to be abducted to Troy by him. Hera and Athene decided to fight Troy.

According to one version of the legend, she never arrived in Troy, but ended up on a long journey back with many detours to Egypt - in Troy, according to the will of the gods, only a “phantom” resembling Helena had arrived. According to the main version of the legend, however, it followed Paris to Troy and thus triggered the Trojan War of the Greeks against Troy when Menelaus , who had been honored in his honor , turned to all the rejected suitors for help. After the death of Paris, she married his brother Deiphobos . After the defeat of Troy, Menelaus forgave Helena despite the history. Both returned safely to Sparta, lived and ruled there for a long time - unlike most of the other Greek princes, almost all of whom perished after the fall of Troy.

The Helena figure appears already in the oldest Western (Greek) epic of Homer , the Iliad , and learned a long literary afterlife (z. B. in Goethe's Faust II , as well as in the Historia von D. Johann Faustus and Jacques Offenbach's operetta La Belle Hélène and much more).

Her name appears in all European languages ​​as a female first name , although in many cases St. Helena may have been the godmother.

The Mount Helen in Antarctica is named after her.