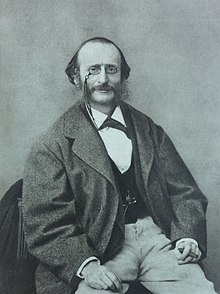 Jakob "Jacques" Offenbach (born June 20, 1819 in Cologne , † October 5, 1880 in Paris ) was a German composer and cellist . He is considered to be the founder of modern operetta as an independent and recognized genre of music theater . His most famous pieces are the dance number Cancan from Orpheus in the Underworld and the barcarole from Hoffmann's stories .

Jakob Offenbach's parents were the cantor , composer and poet Isaac Juda Eberst (1779 / 1781–1850) and his wife Marianne Rindskopf, daughter of a money changer and lottery entrepreneur . Before he was born, the family lived in Offenbach am Main , where the father was the cantor of the local Jewish community. After the city was added to the Grand Duchy of Hesse, the family moved to Cologne, took the surname Offenbach and lived on the Great Greek Market from 1816. Here, too, the father exercised the office of cantor in the Cologne synagogue community on Glockengasse .

Jakob Offenbach was born in Cologne in 1819 as the seventh of ten children; some of his siblings showed talent for violin (Julius) and piano (Isabella). Jakob received his first cello and violin lessons from his father. From November 25, 1830, Jakob performed as a trio with Isabella and Juda in the Gymnicher Hof on Cologne's Neumarkt in order to earn money for music lessons.

To enable his sons Jakob and Julius (Jules), who was four years his senior, a better musical education, the father traveled with them to Paris in November 1833 . The Conservatoire national de musique et de déclamation there was then not open to foreigners; In a decree of 1822 the minister had decreed that he reserved the right to admit foreigners. Even Franz Liszt was not admitted by the director Luigi Cherubini because of this reservation. The father, who came with letters of recommendation, persisted and received approval for his son Jakob on November 30, 1833 (entry in the student list). Jakob moved into an attic apartment at 23 Rue des Martyrs and attended the cello class of Olive-Charlier Vaslin (1794–1889), which he voluntarily left in 1834 without completing it. Jakob - who now called himself Jacques - began as a cellist at the Opéra-Comique in 1835 for a monthly salary of 83 francs and from 1837 received composition lessons from Jacques Fromental Halévy .

From 1836 he composed smaller romances , waltzes and salon pieces ( winter flowers , French Fleurs d'hiver , 1836; Rebecca , 1837), in 1838 he lost his job at the Opéra-Comique. After moving to Paris, Jacques Offenbach met the Spaniard Hermine d'Alcain in 1841, whose father worked as a concert agent. This made Offenbach possible his first concert tour to the London royal court in May 1844, where he played in front of Queen Victoria . After Offenbach had converted to Catholicism , he was allowed to marry Hermine d'Alcain (1826–1887), the Catholic daughter of a Spanish Carlist leader, on August 14, 1844 . Together they had five children, Berthe (* 1845), Minna (* 1850), Pépita (* 1855), Jacqueline (* 1858) and Auguste (* 1862). His first play L'Alcôve was published in 1847, followed by Marietta in 1849 (performed in Cologne in German as Marielle or Sergeant and Commandant ). Jacques moved with his family to Cologne between March 1848 and July 1849 during the German Revolution , which is why he reorganized Marietta there. The family returned to Paris as early as 1849, where Offenbach gave a concert in March for the new President of the Republic, Napoleon III. gave. In the same year he took the position as Kapellmeister at the Théâtre-Français , where he performed his work Pepito in October 1853 in the Théâtre de variétés . In 1855 he left the Théâtre-Français. With Fortunio's song ( French La chanson de Fortunio ; premiere on January 5, 1861) he celebrated his first stage success. Here he gained a reputation as an outstanding virtuoso and played with pianists such as Anton Rubinstein , Franz Liszt and Felix Mendelssohn Bartholdy .

On July 5, 1855, on the occasion of the World's Fair , he opened his own Théâtre des Bouffes-Parisiens , which was initially located in the Salle Lacaze des Théâtre Marigny on the Avenue des Champs-Élysées , with the overwhelming success of The Two Blinds ( French Les deux aveugles ). Seven other world premieres followed, including numerous one-act plays . Since June 1855 he performed his oyayaie very successfully . With his work Ba-ta-clan he opened the winter season on December 29, 1855 in the Passage de Choiseul . The music title gave the Parisian concert hall Bataclan its name.

This was followed by international stage successes with two and three acts . His most important work Orpheus in der Unterwelt ( Orphée aux Enfers in French ) premiered on October 21, 1858 in the Bouffes-Parisiens . The two-act operetta was very successful and made Offenbach popular across Europe. With this piece he made fun of the Second Society of the Empire . The most famous piece of music here is the so-called hell cancan (in the original French Galop infernal ) in the second act, a hit song that is still very well known today and is often performed separately. After Offenbach received French citizenship on January 14, 1860, he became a Knight of the Legion of Honor in 1861 . In 1863 he met in Vienna on Johann Strauss and there wrote The Rheinnixen ( French Les fées du Rhin ) premiered on February 4, 1864 Vienna Theater am Kärntnertor .

Bust on Offenbach's grave in Paris on the Cimetière de Montmartre

In 1870 his birthplace in Cologne was demolished. When the Franco-Prussian War broke out in July 1870 , Offenbach's fame began to fade. The Parisian public avoided him because of his German origins. In the French press he was described as a spy of Bismarck , while the German press insulted him as a “traitor to the fatherland”. He brought his family to safety in Spain and toured Italy and Austria. When he returned to Paris in June 1871 after the end of the war, the taste of the time had changed there and his works were unsuccessful. In 1875 the Théâtre de la Gaîté , which he had only taken over in 1873, had to close. The following year he made successful trips to the United Kingdom and the United States, where he conducted two of his operettas at the Centennial Exhibition and gave over 40 concerts in New York City and Philadelphia .

From 1877 he concentrated on the composition of his work Hoffmanns Erzählungen ( French Les contes d'Hoffmann ), whose part scores he was still able to finish. In September 1880, gout made him bedridden. Offenbach withdrew to Saint-Germain-en-Laye (Pavilion Henry IV, Ruhe Thiers 19), where he died on October 5, 1880 during a rehearsal for Hoffmann's stories . Only Ernest Guiraud completed the orchestration of the opera commissioned by the Offenbach family so that premiered posthumously at the Opéra-Comique held on 10 February 1881 could. In the parish church of La Madeleine , a large funeral service was held for Offenbach, who is known throughout Paris. His funeral took place in the Cimetière de Montmartre cemetery , very close to his home. The tomb was designed by the architect Charles Garnier .

The works of the “inventor” of the operetta have hardly anything to do with what is understood as operetta today, as expectations towards this genre are shaped by the Viennese operetta (such as the pieces by Franz Lehár or Johann Strauss ). Karl Kraus coined the term "Offenbachiaden" for his works to make it clear that Offenbach is the only representative of this genre.

Offenbach combined lively, catchy music with a mostly satirical and subtle plot, which alludes to the customs, people and events of his time, the Second Empire under Napoléon III. , having. Offenbach's music is extremely dramatic, even if the characters on the stage are emphatically immobile. But works like his rediscovered Ave Maria for soprano also show other facets of the composer.

His instrumentation contrasts the full sound of the Viennese operetta with a slim, transparent sound. In German-speaking countries they were often edited because they were found to be brittle. Among other things, this has to do with the fact that trumpets are usually used here instead of the originally prescribed cornets and the modern trombone instead of the so-called baroque trombone , which was in use in France well into the 20th century .

His caricaturing portrayals of the military (for example in the Grande-Duchesse de Gerolstein ) and the German ( Lischen et Fritzchen ) remain incomparable . Offenbach's most famous pieces are the final dance number from Orphée aux enfers , which was originally called “Galop infernal” but is now known as “ Cancan ”, and the “ Barcarole ” from Les Contes d'Hoffmann , which he had previously performed in Les Fées du Rhin had used.

Offenbach himself only used the generic term Opérette (small opera) for one of his works . Most German translations (which as a rule were written before 1960) do not correctly reproduce its original designations.

After the posthumous performance in 1881, Hoffmann's stories enjoyed a triumphant advance through the musical theater, but this version was actually only a badly cemented fragment. Much had been deleted because it was too long, an act that was supposed to take place in Venice had been left out entirely. But at the very latest with the printing of the material by the Choudens Verlag it was laid down what was not intended by its creator. Additions were made at several performance locations, such as in Berlin in 1884, and added to the composition, with the most serious consequences in Monte Carlo, where Artistic Director Raoul Gunsbourg “reworked” entire parts. However, since more of Offenbach's originals, believed to have been destroyed in a fire in the Paris theater, came to the public, the Schott publishing house and Offenbach biographer Jean-Christophe Keck have been working on a modified score .

On the occasion of Offenbach's 100th anniversary of his death in 1980, the “Jacques Offenbach Society” was founded with headquarters in Bad Ems . Offenbach had stayed there repeatedly in midsummer between 1858 and 1870 because a significant number of the spa guests came from France, especially Paris. He performed his own works there with his own orchestra and worked on new pieces for the winter in Paris, including Orpheus in the Underworld . Les Bavards (1862), Il Signor Fagotto (1863), Lischen et Fritzchen (1863), Jeanne qui pleure et Jean qui rit (1864) and Coscoletto (1865) were also premiered in the Marble Hall in Bad Ems . The association was founded in 1979 by the then Bad Ems spa director Heinz Wadepuhl and the teacher and church musician Günther Obst, is dedicated to the performance and research of Offenbach's work and has around 400 members today. Theater scholar Ralph-Günther Patocka has been chairman since 2008.

In 2015 a “Cologne Offenbach Society” was founded with the aim of “establishing an appropriate souvenir of the works of Jacques Offenbach in Cologne”. Founding members include the two former mayors of Cologne, Jürgen Roters and Fritz Schramma .