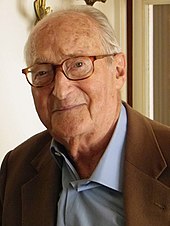 Alain Decaux (born July 23, 1925 in Lille , France , † March 27, 2016 in Paris ) was a French historian and radio presenter . He worked closely with his colleague André Castelot , but also with Jean Tulard and Marcel Jullian , especially for the numerous television and radio programs on the subject of history .

After studying in Lille at the Lycée Faidherbe and in Paris at the Lycée Janson de Sailly , Decaux went to the law school in Paris. He attended history lectures at the Sorbonne  - purely out of personal interest and with no intention of graduating. In 1946 he began to write his first historical articles. He published his first book "Louis XVII retrouvé" (Eng. Louis XVII. Rediscovered ) in 1947. At the age of 25 he received an award from the Académie française for his second work "Letizia".

Decaux was enthusiastic about audiovisual media from an early age and in 1951 founded the weekly radio program “La Tribune de l'Histoire” (German (free) forum of history ) with André Castelot, which was a great success until its end in 1997. In 1957, together with Stellio Lorenzi and André Castelot, he founded the French television program “La caméra explore le temps” (Eng. The camera explores time ), which was broadcast until 1966. From 1969 to 1988 he presented “Alain Decaux raconte” (German: Alain Decaux told ) on various television channels , and later “Alain Decaux face a l'Histoire” (German: Alain Decaux in the face of history ). In this monthly, hour-long forum, he presented a historical person or a major event in history.

At the same time he worked on the publication of other writings and books. This also included the performance of several stage plays, participation in film projects and the recording of various records on historical topics.

From 1988 to 1991 he was Deputy Minister for Francophonie in the government under Prime Minister Michel Rocard, responsible for matters relating to the French language. From 1991 to 2000 he took over the chairmanship of the Association française d'action artistique (German French artists' association ). Since 1998 he has been chairman of the “Collège conservateur” in Chantilly Castle .

On February 15, 1979, Alain Decaux was elected a member of the Académie française and received seat No. 9 as the successor to Jean Guéhenno .

In 2005, Decaux was a guest writer at the Beirut Book Fair with Frédéric Beigbeder , Richard Millet and Jean-Pierre Thiollet .