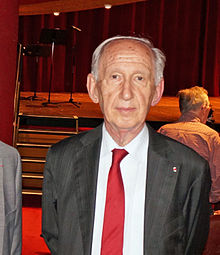 Tulard was a professor of history at the Sorbonne . As early as the 1970s, the newspaper Le Monde called him “the best specialist in Napoleonic history”. His Napoleon biography Napoléon ou le mythe du sauveur , published in 1977, has been translated into German, English and Danish. In the introduction to his short biography of Napoleon from 2004, the historian Volker Ullrich described him as the “current doyen of Napoleon research in France” and his book Napoléon ou le mythe du sauveur as the second most important work of French Napoleon literature (after Napoleon -Biography of Georges Lefèbvre from 1935). In Hans-Ulrich Thamer's essay Napoleon - the Savior of the Revolutionary Nation , 16 of 33 comments refer to literature by Tulard.