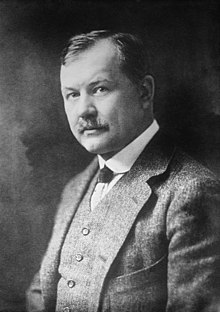 Franz Lehár (born April 30, 1870 in Komorn , Austria-Hungary (today: Komárno , Slovakia ), † October 24, 1948 in Bad Ischl , Austria ) was an Austrian composer of Hungarian origin. Lehár, together with Oscar Straus , Emmerich Kálmán and Leo Fall, is considered to be the founder of the so-called silver operetta era .

Franz Lehár was the son of the Kapellmeister in Infantry Regiment No. 50 of the Austro-Hungarian Army Franz Lehár (senior) (1838–1898) and his wife Christine Neubrandt (1849–1906). Like his father, his brother Anton embarked on a military career which he ended as a general and knight of the Military Order of Maria Theresa .

Lehár's ancestors can be traced back to the beginning of the 18th century as small farmers in Lesnitz and Brünnles near Hohenstadt in northern Moravia. The name Lehar indicates the family's Czech origins, although the name became German after the composer's great-grandfather married a farmer's daughter from Schönwald (Šumvald) near Mährisch Neustadt . Their son lived in Schönwald as a cottage worker and glazier and married Anna Polách, who came from Schönwald, and her son Franz Lehár (senior) (born January 31, 1838 in Schönwald; † February 7, 1898 in Budapest) then became the composer's father. Lehár senior married the Hungarian Christine Neubrandt (1849–1906) in Komorn, whose father was descended from already Magyarized Mecklenburg immigrants, who were still called "Neubrandenburg" in old baptismal registers. “When the mother got married in 1869, she could hardly express herself in the German language, which her parents still knew perfectly. My father, on the other hand, hardly spoke Hungarian at all. Since only German was spoken in the army at that time, but Hungarian society [...] did not like to see German-speaking elements, my mother was almost completely devoid of social intercourse in the first few years. "

Lehár grew up speaking his mother's language, Hungarian . He spent his youth as the son of a military bandmaster with frequent relocations in cities that were then part of Hungary: Pressburg , Ödenburg , Karlsburg and Klausenburg . That is why the “ a ” in the name Lehár received the Hungarian expansion symbol. (The Sudeten German branch , which was based in Liebau until 1945 , is written Lehar , the Czech name bearer Léhar .)

Franz Lehár acknowledged his Hungarian origins through his signature throughout his life, adding his baptismal name Ferenc (Franz) to the family name in the Hungarian way . Lehár abbreviated the word Ferenc mostly with a treble clef-like curlicue and kept this spelling even when he later signed with his German first name.

His military passport says: "... He is 1.65 meters tall, has blue eyes, blonde hair, speaks and writes German, Hungarian, Bohemian, is entitled to live in Schönwald / Moravia ..."

His language skills, which also made it possible to understand other Slavic languages ​​well, he later expanded to include colloquial Italian in Pola / Pula, where he worked as a military bandmaster. He was friends with Puccini and other Italian composers, people exchanged experiences and scores. However, his knowledge of English was very poor, although he was able to distinguish good translations of his operettas from bad ones. They were certainly too few for emigration to the USA or Great Britain.

In Ernst Décsey , Lehár's first biographer, the family legend is quoted, according to which the Lehars are said to have descended from a Marquis Le Harde . This marquis is said to have been captured by the Russians as a member of the Grande Armée , but escaped in northern Moravia and found shelter with peasants. However, there was no evidence of this tradition.

Franz Lehár with his mother Christine in 1875

Franz Lehár's talent was evident in playing the piano at an early age . Like Mozart , he was able to vary a theme with hidden keys as a child . At the age of eleven he composed his first song.

In 1880 his father was transferred to Budapest with his regiment , and Lehár attended the Piarist high school there. In order to give him a better knowledge of the German language, he soon went to the grammar school in Mährisch Sternberg .

From 1882 onwards Lehár became a student of the Prague Conservatory because of his great musicality and, in accordance with his father's wishes, studied violin with Anton Bennewitz, music theory with Josef Foerster and composition with Antonín Dvořák , after having previously been privately taught by Zdeněk Fibich . When Dvořák had seen two compositions by Lehár in 1887, he said: “Hang up your violin and compose instead.” Johannes Brahms “also expressed himself benevolently about me and gave me a recommendation card to Professor Mandyczewski .”

Lehár in his Vienna apartment, 1918

He began his musical career as an orchestral musician in Barmen and Elberfeld ( Stadttheater am Brausenwerth ). Then he became the youngest military bandmaster in the Austro-Hungarian Army . In Vienna he played in his father's band, and through various stations in the monarchy he worked his way up to his father's successor. This career took him to Pola , Trieste , Budapest and from 1899 to 1902 to Vienna . Vienna became his adopted home, and thanks to some great successes, he was soon able to live exclusively from his compositional work and devoted himself entirely to operetta .

With his two first works Wiener Frauen and Der Rastelbinder he was already considered the coming man of the operetta. With the worldwide success of The Merry Widow (1905), he finally took the lead among operetta composers of the time. Soon other successful pieces followed in the next few years: The Count of Luxembourg , Gypsy Love and Eva .

When the “old” operetta had to give way to the revue in the audience's favor in the 1920s (Lehár tried his hand at a revue version of The Merry Widow with Fritzi Massary ), Lehár also said goodbye to this cheerful art form. Since Paganini he has dispensed with the usual happy ending and relied on operatic sentiment and pathos. He wrote most of the tenor roles in these last operettas, such as The Land of Smiles and The Tsarevich , for Richard Tauber . His last operetta Giuditta , which he described as a "musical comedy", was actually premiered in 1934 at the Vienna State Opera. With this performance, which Lehár had longed for, the “House” promised itself a financial recovery.

In private he was very close friends with Giacomo Puccini and was also inspired by his operas (just as, conversely, Puccini was inspired by Lehár to write his operetta The Swallow , which, however, was not a success). Lehár composed four operas himself ("Rodrigo" as well as "Kukuschka" or "Tatjana" at the beginning of his career, later "The Yellow Jacket" and "Garbonciás", a reworking of "Gypsy Love", as the last stage work). In addition to operettas, he wrote two symphonic poems, two violin concertos, film music, songs, dances and marches.

Over the years, Lehár acquired the Schikaneder-Schlössl in Vienna-Nussdorf , which Emanuel Schikaneder had already owned, in 1931 . He bequeathed his villa in Bad Ischl , where he liked to compose in summer, to the city on condition that it be turned into a Lehár museum. A Lehár fund was to be set up from the composer's share for performances of his works in Austria and the income from this fund was to be used to support elderly people in need through no fault of their own. However, no young talents should be promoted with the help of this fund, since, so Lehár wrote, true talent comes by itself and he does not wish that art dilettantism would be raised through it.

Lehár and the "Third Reich"

The seizure of power by the National Socialists in Germany also had a major impact on Lehár, since, as Rosenberg's office notes, “without exception, he had used Jewish textbook authors for his operettas: Leo Stein , Bela Jenbach , Bodanzky , Reichert , Julius Bauer , Julius Brammer , Alfred Grünwald , Herzer , Löhner-Beda , Marton, Willner ”and“ in Vienna exclusively in Jewish circles ”. An Aryan certificate had for himself and his wife by pointing out they were both Catholic, never provided Lehár. However, he was vulnerable to attack because of his Jewish wife Sophie (née Paschkis) and was only granted special permission to practice because of Hitler's special interest. The initial hostility towards him and his work, which emanated mainly from the Rosenberg office, fell silent thanks to Goebbels ' interventions , and his operettas were again tolerated on the repertoire of German theaters.

In 1938 Richard Tauber tried to persuade Lehár to emigrate, which he refused with the words: "To emigrate in the 69th year is not a pity." His poor knowledge of English would certainly have been a major handicap. Perhaps he also hoped that his Hungarian citizenship - which he opted for in 1919 - would leave him alone. For Hungary he was - and is - one of their greatest composers, and an arrest would certainly have led to energetic intervention by the Hungarian government. Hungary was an important ally of the German Reich and so it may well be possible that people deliberately kept quiet here.

In 1938, Lehár's wife was declared an "honorary Aryan" . In the same year Lehár denounced the Jewish lawyer Eitelberg to the State Councilor and SS-Sturmbannführer Hans Hinkel , who was Lehár's patron in the Reich Propaganda Ministry. At the beginning of January 1945 he received a hearty Heil-Hitler from Hinkel ! -New year's greeting. On January 12, 1939 and April 30, 1940, Lehár received awards from Hitler in Berlin and Vienna, including a Goethe medal . On Hitler's birthday in 1938, Lehár gave his famous admirer a ribbon tied in red Moroccan leather to commemorate the 50th performance of The Merry Widow . In 1941 he made himself available for propaganda concerts in occupied Paris. At the end of 1942 he was in Budapest to prepare the performance of his old gypsy love - in a wisely completely “Aryanized” text version. Nonetheless, an attempt was made to deport Lehár's wife once.

Lehár's friend, the librettist Fritz Löhner-Beda, was murdered on December 4, 1942 in the Auschwitz concentration camp . In the literature there is the unsubstantiated claim that Lehár tried unsuccessfully to get Löhner's release through a personal interview with Hitler. On the contrary, recent research showed that Lehár did nothing and, after the end of the Second World War, affirmed that he did not know anything.

After a breakdown while conducting in Budapest, Lehár was allowed to travel to Switzerland with his wife in 1943. At this time he had been suffering from gallbladder, kidney, glandular and eye problems as well as pneumonia for a long time.

The couple spent the last months of the war in Bad Ischl again.

After the end of the Second World War, Lehár refused to talk about the political dimensions of his work in the Third Reich, for example at a meeting with Klaus Mann in May 1945.

After the war, Lehár stayed in Switzerland for medical treatment. In June 1948 the composer returned to Bad Ischl with his sister Emilie Christine, who looked after him after his wife's death. He received honorary citizenship in October 1948 and died shortly afterwards. His grave is in the cemetery in Bad Ischl .