This article covers the city. For the district, see Sopron district .

Sopron [ ˈʃɔprɔn ] ( German  Ödenburg , Burgenland - Croatian Šopron ) is a city ​​with county law in northwestern Hungary , southwest of Lake Neusiedl . It has about 60,000 inhabitants and is located in County Győr-Moson-Sopron (German equivalent: County Raab-Wiesel-Sopron). The Ikva flows through the urban area and juts out like a spur into Austrian territory.

Sopron is located about 70 kilometers south of Vienna and 210 km west of Budapest, is one of the oldest cities in Hungary and is considered a bridge between Hungary and its western neighbors. Sopron is a university town ; the West Hungarian University was founded here in 1735. Because of its role in the Reformation, Sopron was awarded the honorary title “ Reformation City of Europe ” by the Community of Evangelical Churches in Europe .

The Hungarian place name Sopron is of German origin and was originally written Suprun . It was not until the middle of the 14th century that the spelling with o caught on. The place name can be derived from the old Bavarian Sûprun (Sauprunn), the earlier name of the area between the villages of Fertőrákos (Kroisbach) and Balf (Wolfs). The German place name Ödenburg, on the other hand, probably goes back to the Roman ruined city of Scarbantia, which was found deserted at the beginning of German-speaking settlement. 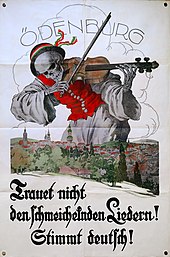 Austrian propaganda poster for the referendum in Ödenburg

The area around Sopron was already populated in the early Iron Age. The calendar mountain urns , which made the place known in the archaeological world, date from the Hallstatt period . The Romans founded the settlement Scarbantia on the site of today's Sopron , a trading center on the Amber Road . Instead of the Roman fortifications, the city walls were built in the Middle Ages. Today's market square was the former Roman forum .

After the Migration Period , the city was a desert that was very sparsely inhabited. At the end of the 8th century, the former city became part of the Carolingian Empire , which was accompanied by extensive settlement and Christianization activities. With the victory of the Hungarians over the Bavarians in the Battle of Pressburg in 907, the Magyar conquest finally began here as well . The Hungarians built a border fortress in the ruins of the Roman city.

In 1277 Sopron received the title of a royal free city when it opposed the siege by King Ottokar of Bohemia .

From 1459 to 1462 the city was temporarily part of the Habsburg family , but was given back to Hungary with the Peace of Ödenburg in 1463.

In 1526, together with Hungary, Ödenburg also fell to Habsburg by inheritance. Ödenburg remained in the Hungarian part of the Habsburg monarchy .

In 1529, during the first Turkish siege of Vienna , the city successfully defended itself against occupation by the Ottoman troops, while the surrounding area was plundered by the besieging troops.

Sopron is one of the centers of the Reformation in Hungary.

A fire destroyed large parts of the city in 1676. As a result, the city was rebuilt in the baroque style, which still shapes the cityscape today.

During the second Turkish siege of Vienna in 1683, the city of Ödenburg surrendered to the Ottoman forces under Kara Mustafa . After the victory of the imperial troops (HRR) over the Ottoman armed forces, the city fathers of Ödenburg paid homage to the Roman-German emperor in Vienna.

In the 17th century were in the Geißkirche the viceroys of Hungary crowned, also there the found Reichstag instead.

In 1896 the town hall was built on the occasion of the celebrations for the one thousandth return of the immigration of the Magyars under Grand Duke Árpád in 896 (Hungarian Millennium) .

After the First World War , Sopron (Ödenburg) was to become the capital of the newly formed Austrian state of Burgenland , which prevented a referendum in Ödenburg .

After the Second World War , a large part of the city's Hungarian-German population was expelled .

Many former Ödenburgers came to Bad Wimpfen , where Ödenburg home meetings took place in the post-war years, so that as early as 1951 a sponsorship and later a town twinning between the towns developed. The cultural association for Ödenburg and the surrounding area was also formed in Bad Wimpfen , which set up the Ödenburg local history museum under Eugen Schusteritsch .

The Pan-European Picnic took place near Sopron on August 19, 1989 , at which 661 GDR citizens were released across the border into Austria. Commemorations are held annually at the site of this event.

Today Sopron is an up-and-coming business location in western Hungary, which is economically closely linked to neighboring Austria. In the 1990s, the city was an attractive shopping destination for residents of the Vienna metropolitan area . 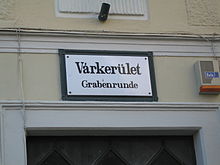 Ödenburg (Sopron) is one of the few cities in Hungary with bilingual street signs .

Since the 19th century the Ponzicht group developed an economic activity. Despite the evictions in 1945, there was a Hungarian-German presence in the city , which today is reflected , among other things, in the elected German self-government in Ödenburg (Soproni Német Nemzetiségi Önkormányzat) , in bilingual place and street signs, most recently in the 2011 census of 5.7 % is recognizable as German declaring city residents as well as at the German Nationality School Ödenburg in the district of Sopronbánfalva (Wandorf). At the nationality school, German is taught five hours per week from the 1st grade onwards, and some other subjects in the bilingual classes. The West Hungarian University also offers courses in German, for example in economics.

Significant secular buildings are the medieval fire tower (landmark of the city), various medieval and baroque patrician houses on Fő tér (main square in the old town), the Gambrinus house and today's town hall , the town's conference and cultural center Franz Liszt , the Art Nouveau Petőfi Theater or the post office . Rákóczistraße shows monumental buildings in the style of historicism and eclecticism, including the former K. u. k. Officer's Daughter Education Institute , the semi-detached house at Rákóczi Street 37-39 and the Museum at Rákóczi Street 53.

Other sacred buildings are the Orthodox Synagogue , the Old Synagogue and the Evangelical Church .

In the Balf district there are healing springs containing hydrogen sulfide, which were already known to the Romans. Therefore, a therapeutic bath was created here, which offers exercise, tub, carbonic acid and underwater traction baths as well as underwater jet massage, therapeutic gymnastics, electrotherapy and Kneipp treatments. Orthopedic and neurological symptoms can be treated here .

One of the Sopron museums is the collection of the watercolor artist József Soproni Horváth (1891–1961). In the Balfi u. 11 is the Zettl-Langer private collection, which documents the artistic and collecting activities of the liqueur manufacturer Gustav Zettl (1852–1917). It has been open to the public since 1955 and offers an almost intact example of the lifestyle of the Sopron bourgeoisie around 1890.

In the early Middle Ages, the Sopron area was a center of iron smelting. Today the most important branches of the economy in the region are tourism, forestry, timber industry and viticulture. Two industrial and innovation parks have settled in Sopron.

This means that the ÖBB-Burgenlandbahn route through Hungarian territory forms a corridor route .

The freight yard (left and center) and the terminal including loading point for the Rollende Landstrasse (right) in Sopron, which are operated by GySEV .

The nearest airport is in Fertőszentmiklós . The nearest commercial airports are Vienna and Bratislava .

Other people associated with the city