The title of this article is ambiguous. Further meanings are listed under Szombathely (disambiguation) .

Szombathely [ ˈsombɒthɛj ] ( German  Steinamanger , older also Stein am Anger , Croatian Sambotel , Slovenian Sombotel ) is a town in western Hungary near the border with Austria . The city is the seat of the Vas (Eisenburg) county and the Szombathely district , it has county rights itself .

According to some researchers, Szombathely, the ancient Savaria , probably emerged from a fort built during the Roman occupation of Pannonia from 9 AD. Little is known from the earliest phase, however. Also, no pre-Roman settlement sites have been discovered in the area of ​​the historical city area. The expansion of the Amber Road, which was presumably already started during the reign of Emperor Tiberius (14–37 AD), was probably a decisive factor in the emergence of the Amber Road at an unknown point in time during the reign of Emperor Claudius (41–54 AD) founded Colonia . The city was named " Colonia Claudia Savaria " .

The name is already mentioned by Pliny the Elder in his third volume of the Naturalis historia . Later, the name variant Sabaria prevailed. Szombathely is most likely the oldest Roman city founding in the Roman province of Pannonia and thus the oldest on today's Hungarian territory. During the reign of Emperor Trajan (98–117), Savaria was appointed the capital of the province of Upper Pannonia and retained this status - later for the province of Pannonia prima - until late antiquity.

In 303 Quirinus , the bishop of Siscia , was executed in the city as part of the persecution of Christians . In 316/317 St. Martin of Tours was probably born in Szombathely. On the other hand, the Territorial Abbey of Pannonhalma claims that the saint was born near it, as there was an ancient place there called Savaria . In the 5th century, the city was gradually abandoned by its residents (mostly Ostrogoths ) who moved to safer regions of the Roman Empire. In addition, the city was badly damaged by an earthquake on September 7, 456 .

In the empire of the Carolingians

In 791 the name Sabaria reappeared in the chronicles. Charlemagne visited the city on his campaign against the Avars . In the early 9th century Sabaria marked the southernmost end point of the Franconian Avar principality and was possibly developed into a secular or ecclesiastical center at that time. After the dissolution of the Avar principality, the East Franconian county of Steinamanger was created , and Steinamanger became a suburb of a political unit again. As a result, German settlers coined the name of the town “Stein am Anger” - today “Steinamanger” - which referred to the ancient ruins that were found everywhere at the time. The county that stretched between Rabnitzbach and Raab was likely to have existed as early as 844. It can be traced back to the year 860, when Count Odolrich is named as the holder of two diplomas from King Ludwig the German . In this function he succeeded Count Rihheri , who was deposed in 857 by the new administrator of the East Bavarian region, Karlmann . In 869 Count Odolrich fought near Baden in the army of his lord Karlmann. The last namable lord of the county is likely to have been Count Ernst (mentioning 877), who was subordinate to the Margrave Arbo . But later Counts of Steinamanger in the Carolingian era cannot be ruled out either.

From the 11th century the town belonged to the bishops of Győr . In 1407 she received a letter of privilege and thus the town charter . In 1578 the city rose to the seat of the county . In 1605 Szombathely was sacked by the captain of Heiduck, Gergely Némethy. On May 3, 1716, a conflagration partially destroyed the city.

Szombathely, Óperint Street - plaque commemorating the 1700th anniversary of the death of Bishop Quirinus of Siscia

Queen Maria Theresa founded the diocese of Szombathely in 1777 , and the settlement was expanded into an elegant small town in the years that followed. In the second half of the 19th century, the city was in the middle of the Austro-Hungarian monarchy and became an important transport and light industrial center. The two railway lines Budapest – Graz ( Hungarian Western Railway ) and Vienna – Agram crossed here .

After the end of the kingdom

After the First World War , Hungary's new western border was drawn only 12 km west of the city on the basis of the Treaty of Trianon in 1921, which affected the city's central functions. One of the most modern hospitals in Hungary was built here in 1928, and Szombathely remained the county seat.

Road border crossings were now up until 2007 to the west of Bucsu in 14 km, to the north-west of Rechnitz in 23 km and to the north of Rattersdorf in 20 km and Klingenbach in 80 km.

In 1944 and 1945, the city and town were bombed several times during the day by aircraft of the 15th US Army Air Force. Air raids were carried out at night with aircraft belonging to the Royal Air Force 205 Group. Around 300 people were killed and four fifths of all buildings were destroyed. The following years of the Cold War were considered to be a time of recession due to the proximity of the “ Iron Curtain ”.

After 1989, the city began to develop positively, reinforced by Hungary's accession to the EU in 2004 and the abandonment of controls at the border with Austria in 2007 due to the Schengen Agreement .

In 2000, a tradition from the 1960s was revived in Szombathely - the Historical Carnival, which usually takes place on the penultimate weekend in August. This event has now established itself as a tourist attraction far beyond the borders of Hungary.

With the entry into force of the Schengen Agreement on December 21, 2007, border controls between Hungary and Austria were completely eliminated. Since then, Szombathely and the Austrian Burgenland have also been connected by various side roads where there was no border crossing.

The Irish writer James Joyce lets the father of Leopold Bloom , the protagonist of his world-famous novel Ulysses , come from Szombathely:

"After the lifting of all confidentiality, what was your parentage?
Bloom, the only, male, transubstantial heir of Rudolf Virag (later Rudolph Bloom) from Szombathely, Vienna, Budapest, Milan, London and Dublin [...] "

The city honored the author with a statue in the main square. The Bloomsday is celebrated in the cultural program of Szombathely annually.

The Lamantin Jazz Fesztivál has been taking place in Szombathely for 15 years now . 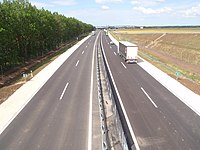 New flyover on Csaba Street (since 2012)

Szombathely has been connected to the Steinamanger expressway since June 28, 2014 . With the completion of the gap to Csorna on October 25, 2016, Szombathely and Budapest are now continuously connected via expressways.

The first railway line was opened in 1865 from Wiener Neustadt - Ödenburg -Szombathely to Nagykanizsa . The Styrian Eastern Railway or the Hungarian Western Railway - depending on your point of view - connects Szombathely with the Styrian capital Graz . The continuation to Graz was officially opened on May 1st, 1873. In autumn 1872, the Hungarian Western Railway, together with a consortium of industrialists, applied for approval of technical preparatory work for the construction of the Graz - Knittelfeld line. A line to Kőszeg was opened in 1883, the Pinkatalbahn in 1883 , to Pressburg in 1891 , to Rum in 1894 , and to Murska Sobota via Körmend in 1907 .

The direct rail connection via the Pinkatalbahn to the Austrian suburb of Oberwart was interrupted after the Second World War. Reconstruction was already underway on the Austrian side as far as Großpetersdorf near the state border. After the cessation of passenger traffic on the Friedberg –Oberwart line in September 2011, revitalization is considered unlikely.

Szombathely is a transport hub where nine different railway lines meet. InterCity trains run 8 times a day from Szombathely via Győr to Budapest Keleti pályaudvar and 7 times back, of which Rába IC runs to and from Graz main station .

No 1. car in the Smidt Museum

The railway lines Szombathely – Sopron (Steinamanger – Ödenburg) and Szombathely – Szentgotthárd (Steinamanger – St. Gotthard) are no longer operated by the Hungarian state railway MÁV , but by the Austro-Hungarian Raaberbahn (Raab-Oedenburg-Ebenfurter Eisenbahn = ROeEE or Győr-Sopron) -Ebenfurti Vasút = GySEV) operated. The Hungarian Ministry for National Development decided on June 18, 2011 to transfer the operational management of all MÁV lines in the Szombathely area to the Raaberbahn from December 2011. Today the Szombathely Central Station is the largest and busiest station on the Raaberbahn.

The Szombathely tram was started by the Vas County Electricity Company, founded in 1895. The electricity required for their operation came from the Ikervár hydroelectric power station. The bell signaled the start of the first train on June 4, 1897. Operations ended on August 20, 1974.

Today Szombathely is a city according to Central European standards, it hardly reminds of the time of socialism . The city is an industrial and commercial city with good residential and shopping opportunities. Some supermarket chains and other shops have settled. There is industry in the areas of electronics, vehicle construction, wood and textile processing. The largest industrial companies are: LUK (2,500 employees), Epcos (1,700 employees), BPW (1,300 employees). Here is the location of the Hungarian emergency number -112, with 400 employees. The national traffic police administration center with 800 employees is located in Szombathely - this is where speeding mandates from all of Hungary are processed. The land around Szombathely is mainly used for agriculture.

The city is also known for the so-called "dentist tourism". Many Austrians, Germans or even Swiss and French have been coming to Szombathely for years because of the much cheaper treatment costs.

The wage level in Szombathely in 2010 is around 50% of an average EU citizen, but prices for food, clothing, etc. are already EU levels.

Szombathely is the location of a medium wave transmitter on the frequency of 1251  kHz with 25  kW transmission power at 47 ° 12 '2 N 16 ° 39' 43 E, which uses two 60 meter high self-radiating transmission masts as a transmitting antenna , which were built in 1954/55. The transmitter mast shown in the picture on the right is designed as a transmitter mast isolated from earth, the left mast is earthed at the base and is fed in the middle via externally guided wire ropes.