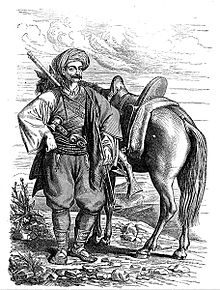 As hajdús ( Sg. Heiduck ; also Hajdu, Heiducke, Hayduke or Hajduke; osman.-Turk. Haydut ; Albanian  hajdut / -i ; Hungarian Hajdú ; Serbo-Croatian hajduk ; Romanian haiduc ; Bulgarian chajduk . U chajdutin ) were referred to the time of the Turkish rule over southeastern Europe mostly gang-organized outlaws , especially highwaymen , looters and insurgents . They are subject to a romanticization similar to that of Cossacks and pirates . In retrospect, the Heiducken are seen by the Southeastern European nations, comparable to Robin Hood, as defensive representatives of national and religious resistance and freedom fighters against the Ottoman Empire . In the Habsburg and Transylvanian spheres of influence, the Heiducken were also integrated into the defense structure, and in the Principality of Transylvania (especially under Prince Stephan Bocskai ) they were settled according to plan and given privileges. Place names with “Hajdú” remind of this or should remind of it.

The Turkish word Haydut now describes this type of predatory person who rebels against the system, and this is possibly why the expression, also modified as Haiduck , became a synonym for such individuals from the middle of the 16th century . Originally it possibly referred to Hungarian cattle herders ( Hungarian hajtó for ox drivers ) and later also mercenaries who took over the border control for the Ottoman Empire and perhaps later revolted against them.

Originally, Heiduck may have been referring to a robber or apostate from the state authorities. During the national liberation struggles of the south-east European peoples in the 19th century, a romantically transfigured image of the Heiducken as folk heroes and champions for national liberation and / or social justice spread increasingly in these nations. In Southeastern Europe the word can mean insurgents and freedom fighters as well as robbers and outlaws. The term is therefore ambiguous. It describes both simple robbers who attacked and murdered people regardless of origin or social status, as well as irregular militias or freedom fighters up to socialist revolutionaries .

As such, the Heiducken are still the subject of popular veneration today and are sung about by Guslaren in "Hajduken songs", especially among Serbs , but also by the Croats in Bosnia-Herzegovina .

The historian Suraiya Faroqhi mentions that there were numerous bands of robbers in the Balkans in the 17th and 18th centuries, which, however, developed in a slightly different way than those in the Turkish heartland of Anatolia . Since a large part of the rural population in the Balkans and thus also the mercenary gangs consisted of non-Muslims, she suspects that it was not so much about the permanent employment of irregular soldiers. On the other hand, some military men who (no longer) found work in the border districts tried to secure their livelihood through robbery and pillage. In any case, it is "not realistic to see protonationalist fighters for local autonomy in the so-called Haiduken, as often happened in older literature". These Balkan Heiducken were "far from taking 'noble robbers' from the rich in order to give gifts to the poor," but instead mostly attacked whoever they found.

In addition to mercenaries and nomads, there were other people who left their homes periodically or due to special life crises. Inheritance disputes, epidemics, excessive demands by tax collectors and robberies repeatedly drove young farmers out of their villages, who then often became heathen.

From the 18th century onwards, the word "Heiduck" was also used in a wider sense as a term for the servants of rich people in Austria-Hungary and also at German courts.

The origin of the word is not entirely clear. The term may have developed from the Turkish haydut for robber, outlaw ; or from the Hungarian hajtó (plural hajtók ) for ox driver. These two theses do not have to be mutually exclusive, as it could originally have gotten from Hungarian to Turkish and described Hungarian cattle herders who also worked as mercenaries to secure the Hungarian-Turkish border for the Ottoman Empire when Hungary came under Ottoman rule. It is also possible that these mercenaries revolted against foreign rule at some point and so the term with negative connotations came about.

One thesis assumes that the German word Haudegen could have been picked up by fighters in Freikorps in Austrian and other armies at the time of the Turkish wars . The word Heiduck was probably formed from several sources. 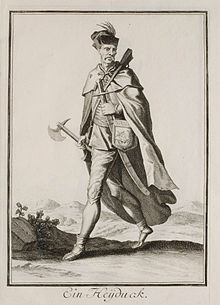 Heiduck, from what was then the Hungarian area of ​​influence (1703)

In Austria and the Kingdom of Hungary , Heiduck referred to paid infantrymen who guarded the border at the end of the 16th and beginning of the 17th centuries, as well as later armed guards in cities, counties and on the property of noblemen. The Habsburg Monarchy named the three regular Hungarian infantry regiments Hayduken in 1740 . The heathenism in south-east Europe took off at the end of the 16th century, after the first military failures of the Ottomans.

In the Austro-Turkish War 1716–1718 , Heiducken were Austrian foot soldiers in Serbia and the Banat . Heiducken under the limited protection of the Habsburgs ( Uskoks ) invaded areas occupied by the Ottoman Empire as semi-regular troops in the 17th century. The brigand leader was, as with the Haramija , Harambaša called.

Some reasons for the Heiducken life were: resistance against the Ottoman violence and exploitation, better earning opportunities, revenge for experienced injustice, escape from threatened retribution. Heiducken mostly stayed in remote areas that were beyond the control of the law (mountains, forests, swamps), and sometimes enjoyed the support of local Ottoman security authorities ( Pandours , Martologists , Derbendschi).

In Serbia, which was crisscrossed with important Ottoman trade routes, the heathen system was a form of predatory economy. However, the predatory system mostly had little to do with the notion of a permanent "fight against the Turks", which was mainly influenced by Romanticism and later national histories .

In the Greek territories the Klephts acted , as the robbers were called there.

At the beginning of the Austrian War of Succession in 1741, Archduchess Maria Theresia took over three regulated Hungarian infantry regiments and set up another three units: Ujvary (1769: No. 2), Leopold Pálffy (No. 19), Haller (No. 31), Forgach (No. 32), Andrassy (No. 33), Vettes (No. 34). All regiments probably had in common that they were initially formed only from criminals and rabble. The Haller Regiment is reported to have murdered an officer on the march to Peterwardein and opened a local robber rule “until county militias disarm and bring it to justice”. Nevertheless, the Forgach infantry regiment had some success in Italy in 1746/47 . Especially in the Seven Years' War , the Heiducken appear disciplined, especially the Esterházy regiments (1769: No. 33 and No. 37).

The word haiduc was used by the Romanian movement Haiducii Muscelului , which rehearsed the uprising against the Soviets in 1947 and 1959 . 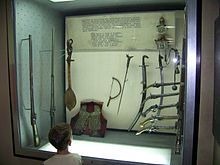 Some of the Heiduken in the following list in Southeastern Europe were active before the nation formation . The assignment reflects the current - in some cases spanning today's national borders - worship among the peoples mentioned , which, like nationality, has developed in Southeastern Europe, mostly largely through religious affiliation.