Looters is a redirect to this article. For the US western from 1960 see Die Plundererer . 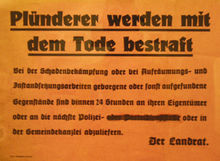 With looting (from Middle Low German  plunder  for, household items, clothes') refers to the theft or robbery of goods and goods by persons or groups of troops (cf .: Marauder ). This makes looting easier when public order collapses. This occurs during disasters , riots or acts of war . 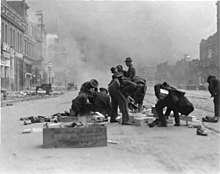 Wehrmacht soldiers in a shop in Athens in April 1941

Individuals, containers and transport devices, entire buildings or even towns and regions are victims of looting; often evacuated areas are also z. B. apartments abandoned for a short time are the target of atrocities. Ships on the open sea are looted by pirates . There are also reports of looting soldiers during and after armed conflicts (“ spoils of war ”) who commit a criminal offense under international martial law - in contrast to a commander in chief who can order a requisition . In the wake of wars, gangs also specialize in looting ( cf. Krippenreiter ).

The looters also avail themselves of the emergency situations that z. B. caused by previous robbery or damage . Accidents , fighting and other circumstances that require the absence of protection personnel and the public often result in looting. Looting is also carried out during pogroms . In the event of disasters , the media and other institutions often assume “looting” where some rob , but others - thirsty, hungry, freezing, etc. - only get what is absolutely necessary ( mouth robbery ).

The term “looting” is also used figuratively in connection with behavior that accepts greater damage in the long term for short-term (monetary) benefit (see also overexploitation ). Environmentalists refer to the mining of fossil raw materials as plundering as well as the clearing of rainforests, slash and burn and overfishing of a body of water. Anyone who carelessly consumes goods plunders their account and / or their reserves.

In Germany, Austria and Switzerland, looting is considered a particularly serious breach of the peace . Defense against looters is allowed to individuals as part of an act of self- defense .

Pillage is the Art. 28 and the Art. 47 and Art. 48 Hague Convention in the war prohibited.

In Germany , crimes against “the general rules of international law” are prohibited under Article 25 of the Basic Law . Breach of the peace is punishable by Section 125a No. 4 of the Criminal Code ("Particularly serious case of breach of the peace"), which is also used in the event of war with Section 3 of the Military Penal Act .

In Austria, similar provisions apply with Article 9 of the Federal Constitutional Law and Article 64 of the Austrian Criminal Code .

During the Second World War, numerous German courts or special courts sentenced people for looting to sometimes draconian sentences up to the death penalty .