The slash and burn (English slash-and-burn ) is a millennia-used technique to vegetation areas using fire to Schwenden ( not too clear , as the roots remain in the soil), and is used mostly to prepare agricultural production.

Slash and burn is often used as part of the so-called subsistence economy in traditional forms of economy , which is used alone or largely for production for personal use. Another area of ​​application is z. B. the creation of pastures, which are mostly used extensively with low livestock due to insufficient load-bearing capacity .

In the past, when the existing nutrient reserves in the system were exhausted, the areas were often completely abandoned in favor of new, untouched primary forest areas as part of shifting cultivation ( slash-and-burn cultivation ), but today this is usually no longer possible in many countries against the background of legally binding ownership structures. Further areas of application of slash and burn are still z. B. Infrastructure - Measures such as exposing routes for road construction or removing vegetation under overhead lines .

Slash and burn, in connection with ringing , can already be assumed from the Neolithic . Slash and burn was common in various phases of land reclamation in Europe. A drill core from the Mondsee in Austria refers to 6000 BC. Chr. Slash and burn took place. In the Middle Ages date can be approximately Toponyms on Brant , Brende or senge (s) , sing (s) , sang . In the 15th century, however, slash and burn was already a criminal offense, and the beginning of the Little Ice Age forbade useless destruction of firewood . In densely wooded Scandinavia, the method was practiced by the so-called forest fins until the 19th century .

Modern situation and problems in the tropics

The successful introduction of cash crops for marketing various agricultural products requires regulated ownership structures, better training for smallholders, access to finance and appropriate sales markets . Often in the absence of other effective tools, slash and burn z. T. also today in equatorial regions such. B. Northern Brazil or the Kalimantan called Indonesian part of Borneo . Slash and burn is z. B. in the northern Brazilian state of Pará operated by smallholder families on 25 hectare plots that have been settled since the mid-19th century; ownership was guaranteed by the state in the beginning of the 20th century. The establishment of cattle farms on the southern edge of the Amazon is the cause of a third of the world's loss of rainforest areas through slash and burn.

An area intended for agricultural production is often manually z. B. cleared with machetes, which with 40 tons of dry matter per hectare can cost over 120 hours of work. If perennial plants such as passion fruit or pepper are to be grown, the roots must also be cleared to remove the above-ground vegetation . The tailings are left to dry for several weeks and then infected. It is not uncommon for the fires to get out of control and devastate entire stretches of land: in the spring of 1998 in the northern Brazilian state of Roraima, an area the size of Belgium was destroyed by flames. In the Southeast Asian region, health problems often arise in the months from May to October due to clouds of smoke that arise as part of the Indonesian slash and burn. The governments of Malaysia and Singapore publish air pollution measurements on the Internet every hour. In June 2013, the measured values ​​in both countries reached the dangerous range for the first time due to over 130 fires in Indonesia . Before that, the highest level from 1997 was very unhealthy . Due to air pollution, foreign policy tensions are developing towards Indonesia in the affected countries. Animals are also threatened by the fires. In the tropical rainforest, however, there is only a small risk of major forest fires, as the overall climate is very humid and rivers would block the path of the fire everywhere. However, the risk of major forest fires increases when deforestation, slash and burn, and global warming cause the rainforest to become drier. 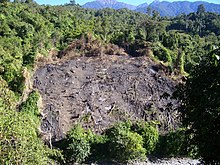 Slash-and-burn, subject to the precondition of sparse settlement, was a sustainable technique until the 19th and beginning of the 20th century , as the clearing and cultivation cycle was followed by a sufficiently long fallow phase of around 15 years. This gave the secondary forest , known as Capoeira in Brazil (as well as the martial art of the same name, Capoeira ), the opportunity for sufficient regeneration, as nutrients such as nitrogen (e.g. through nitrogen-fixing bacteria in legumes ), but also potassium or magnesium (etc. by atmospheric inputs or deep-rooted trees) were replenished and fixed in the vegetation and humus . With massive population growth since the 19th century, however , the soils were exhausted in many places due to production cycles that were too fast, as the fallow period was shortened to less than 5 years.

Effect on the nutrient cycle

The basic problem of slash and burn is the distribution of nutrients in tropical ecosystems . In the temperate latitudes, around 80% of the nutrients are stored in the soil and only 20% in the vegetation. In the tropical soils, this ratio is less favorable, sometimes even the other way round. According to the international WRB soil classification system, tropical soils belong primarily to Ferralsols and Acrisols . Their pH values in the topsoil are around 5 (Ferralsole) or below (Acrisole). For tens of thousands of years, these soils have been exposed to very high levels of solar radiation , high annual mean temperatures and extremely high levels of precipitation and are therefore almost completely weathered . Their minerals (e.g. kaolinite ) can hardly store nutrients, and many nutrients have been washed out in the course of weathering. Nutrients are practically only contained in the biomass and in the humus , i.e. the organic fraction of the soil. Due to the high temperatures and constant humidity, however, small and microorganisms ( destructors ) can mineralize dead biomass and humus in the lower floors of the forest , in the litter and in the mineral soil, releasing nutrients in the process. These are then either bound to the humus as exchangeable ions or (usually via a mycorrhiza ) returned directly to the roots of the jungle plants. As a result, a short-circuited nutrient cycle has developed: a significant proportion of the nutrients released by mineralization are immediately absorbed by plants and thus not washed out.

The soils of the temperate latitudes, however, were z. B. re-layered from the last ice age and enriched with nutrient-rich loose sediments such as loess ; in addition, they are exposed to comparatively low temperatures and less precipitation, so that they weather very slowly. Due to the only moderate weathering , three-layer clay minerals have formed which (unlike tropical kaolinite) can store larger amounts of nutrients ( cation exchange capacity ), which is why only a few nutrients are washed out. Although clearing reduces the humus reserves in the soil even in the temperate latitudes , weathering constantly releases nutrients that are stored in the three-layer clay minerals and made available to the crops. The soils of the temperate latitudes are therefore less endangered by (fire) clearing than the heavily weathered tropical soils.

Slash and burn mobilization mobilizes the nutrient capital stored in the biomass and makes it available for agricultural production. The fire not only releases the previously bound carbon in the form of carbon dioxide and thus contributes to the greenhouse effect . According to studies , more than 90% of the nitrogen contained in the biomass , larger proportions of the sulfur and up to more than 40% of the cationic nutrients such as potassium or magnesium are lost during burning . The rest remains in the ash , which is used as fertilizer for the production of e.g. B. of corn or cassava . For smallholders, this ash fertilization usually represents the only affordable input to promote their production. The use of mineral fertilizers or their own machines is usually out of the question for them, but there is sometimes a rental system for machines. The fire also causes an increase in the pH values in the topsoil, for a short time even in the alkaline range, after which they level off for a few years to values ​​between 5 and 6.5. This makes existing nutrients, especially phosphorus , more available.

The biomass lost in the fire can no longer find its way into the ground as litter . The clearing also increases the solar radiation and thus the soil temperature, which accelerates mineralization and releases further nutrients. Both effects together cause a reduction in humus stocks (carbon stocks ) in the soil and thus an increase in the greenhouse effect . Furthermore, the only group of substances that can store nutrients in tropical soils is lost. This leads to rapid nutrient leaching and a decrease in production. The smallholders are migrating to new, unused areas. This increases the pressure on previously untouched forest areas that have ecologically important functions, e.g. B. to safeguard biodiversity , as forests provide a habitat for most terrestrial species, but also serve as a carbon sink to define the greenhouse gas carbon dioxide . Where the forest has to give way to the cattle pastures of large landowners, the soil is compacted by cattle kicking, as well as being wounded and exposed to severe soil erosion , making it impossible for the forest to return. Traditional slash and burn, however, hardly caused long-term damage to forests, and burning small areas even reduced the risk of forest fires in affected areas. Only the massive and large-scale use of slash and burn without subsequent sufficient fallow land , such as for the production of pasture land (see also Fazenda ), causes irreversible damage to nature and the environment, which also affects the water balance of the landscape and the Inertropical Convergence Zone (ITC) and thus also on the rainy seasons of the summer humid tropics .

Due to social conditions, slash and burn cannot be stopped or prohibited without further ado without robbing millions of people of their livelihood. Research is therefore being carried out into ways of optimizing the slash and burn system in a socially acceptable way through improved productivity and environmental compatibility. Approaches are: