This article deals with the meteorological term precipitation, further meanings under precipitation (disambiguation)

Under precipitate is understood in the meteorology water including its impurities, consisting of clouds , fog or haze (both clouds in contact with the soil) or water vapor- containing air ( humidity ) is derived and

Water vapor is released into the atmosphere through evaporation and sublimation . Clouds arise from condensation nuclei through condensation of moisture in the air. In order to be able to fall back on the earth's surface as precipitation, the size (or mass) of the condensed particles must exceed a certain value. The water cycle is closed by the precipitation . 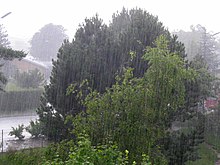 Artificial snow from snowmaking systems , artificial ice and black ice (frozen lake and sea water) are not counted as precipitation because the water does not come directly and mainly from clouds, fog or humidity. Relocated precipitation (e.g. snow displaced by the snow plow , spray plumes , roof avalanches , rainwater in flowing waters ) remains precipitation.

"Rain" from sprinkling systems is i. A. not counted as precipitation, but can lead to increased cloud formation and increased "general precipitation" due to the increased evaporation.

Laws of the spatial distribution of precipitation

Two different types of measuring devices are used to measure :

One looks at the liquid water (precipitation water), which collects in the event of precipitation (rain, snow, hail, fog, etc.) in a defined period of time (see also precipitation intensity) in a vessel that is only open at the top and has a defined horizontal opening. The amount of precipitation is the volume of the liquid in relation to the area of ​​the opening and is given in liters per square meter (1 liter is 1  cubic decimeter ). With the conversion

The usual measurement interval (it must always be specified) is 24 hours (1 day), but also 48 or 72 hours and so on for longer heavy rain events, for driving rain also 1 hour and correspondingly more, but also up to 5 minutes (e.g. as a dimensioning for drainage facilities on buildings) as well as a month, a season and the whole year for climatological considerations. In those cases in which several standard intervals are added, one also speaks of the total precipitation .

Factors such as evaporation , soil infiltration or runoff are not taken into account in the measurement.

Other information for statistical purposes can be millimeters (centimeters for snow) per day, week, month or year.

The following meteorological - climatological expressions exist for the average amount of precipitation in the course of a certain period at a defined location or in a certain region .

For the characteristics of a specific year, the measured precipitation is added up (accumulated) and then compared with the mean precipitation for the same assessment period: In this way, a statement can be made as to whether a month or year is "too wet" or "too dry", a winter " snowy ", or that in a heavy rain event" the normal precipitation of a month fell in three days ". Likewise, climate and season characteristics can be compared, for example “dry in winter”, “maximum precipitation in late summer”.

Regionally limited extreme precipitation can also be significantly higher. For example, for the rain event on June 2, 2008 in the Killer and Starzeltal in Baden-Württemberg, precipitation of around 240 millimeters was determined in one hour.