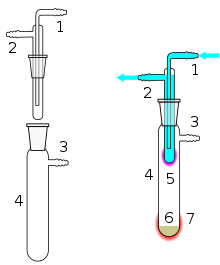 As sublimation , rarely sublimation (of lat. Sublimis , high in the air located ',' superior '), is the process of immediate transition of a substance from the solid to the gaseous state of aggregation without liquefy before. It is a purely physical process in which the substance remains chemically unchanged.

Sublimation can be confused with dissociation . For example, ammonium chloride breaks down into ammonia and hydrogen chloride when heated .

When processing materials by means of laser beam sublimation cutting, the sublimation occurs with the high pulse power of the laser. The material does not melt first, but changes directly from the solid to the gaseous state. The result is a very clean cut with no slag or frayed edges.

Further applications are the freeze-drying of food, which is very gentle compared to other drying methods, as well as sublimation printing . 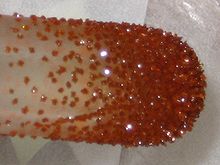 Sublimation is also an alternative to recrystallization when purifying products in synthetic chemistry. Compared to crystallization , sublimation offers several advantages: The products are often very clean and even the smallest amounts can be conveniently sublimated in a sublimation apparatus. The authors present an example of the application of sublimation of small amounts in the radiochemical field for radiochemical purification of a nuclide in the context of the half-life determination of 79 Se . Sublimation is primarily a laboratory process for cleaning fabrics, e.g. B. for ferrocene and pyrogallol . A disadvantage compared to crystallization from the melt is the comparatively difficult scaling up during sublimation. In the chemical industry, the technical implementation of sublimation as a separation method is therefore of secondary importance. Sublimation is used industrially as a refining process for naphthalene , phthalic anhydride , camphor , anthraquinone , salicylic acid , benzoic acid , uranium hexafluoride and many metals.