This article covers the phase transition of evaporation to the corresponding coating process using this method, see thermal evaporation 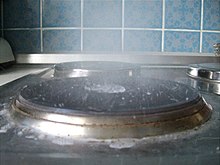 Water evaporating on a hotplate

The evaporation is the phase transition of a liquid or a liquid mixture into the gaseous aggregate state .

For the evaporation of a liquid, the enthalpy of evaporation must be applied. Heat is extracted from the environment or the liquid . If no external heat is supplied to the system, a closed system reaches a certain state of equilibrium , which is described by the temperature and the phase proportions in the physical states involved.

A distinction is made between two forms of vaporization

The liquid evaporates as long as the saturation vapor pressure is not reached in the gas phase.

Water boils at a temperature of 100 ° C and an external air pressure of 1.013 bar. As long as it is an open system with constant pressure, the water evaporates. The mass flow of the boiling liquid is determined by the heat input to the liquid.