Watercourse is a redirect to this article. For the water transfer tunnels in the Upper Harz mining, see Wasserlauf (mining) . 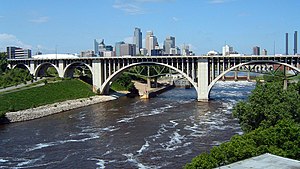 The Mississippi River in Minneapolis, USA

In hydrology, flowing water is a collective term for all surface flowing water and describes a watercourse of the inland with continuously or temporarily flowing water . Running waters are surface waters . (Flowing) groundwater that moves underground is not flowing water. Cave rivers ( karst waters ) that run underground or disappear in ponors are unclear in the classification, but they are mostly counted as flowing waters.

As a rule, rivers transport the water from their catchment area according to the force of gravity to their confluence with a higher-level river, a lake or a sea. In contrast to running waters, still waters contain stagnant water or water that drains off very slowly. A moat can be either a flowing water or a still water. 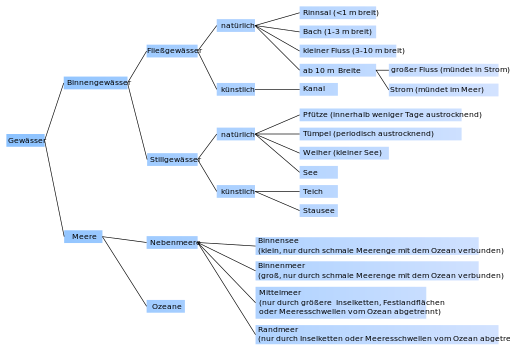 Classification of waters. The information on the width of natural rivers is only intended as a guide and is not to be understood as a definition.

The victory in Blankenberg ( river ) 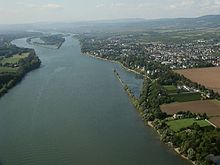 The Rhine in Mainz ( current )

Natural flowing waters can arise through direct, superficial or near-surface runoff of rainwater, following the gradient. At least in humid and semi-humid areas, however, the rainwater regularly seeps into the ground for the most part beforehand and forms groundwater horizons, the runoff of which emerges as springs . This stabilizes the outflow. Apart from exceptional cases, natural rivers are natural groundwater receiving waters along their entire length ; This means that groundwater can flow sideways into the water along its entire length, even away from defined sources.

Rarely, rivers are created by excess water draining from lakes and moors or meltwater from glaciers . The rivers thus formed have their own character with peculiarities of water chemistry, runoff dynamics and community.

Classification according to size and other criteria

In general, natural flowing waters are divided into four orders of magnitude: trickle , stream , river and stream . In dialectal there is also the term Ache (in northern Germany also Au ), which describes a range between stream and river.

In technical jargon, the term trickle is rarely used. When considering the different sections of rivers from the source to the mouth ( see below ), only the terms stream , river and, if applicable, stream are used. For example, the middle and lower reaches of the Weser are classified as streams, their source rivers Werra and Fulda each as a river and the source courses of both as streams.

The allocation of rivers to the categories stream , river and stream is vaguely based on the dimensions width, length, catchment area and runoff , which, however, are not clearly defined. Criteria such as navigability (depth) and historical aspects also play a role.

The estuary water is often used to define electricity , following DIN standard 4049. According to this definition, a river would be a flowing water that flows into the sea. After that, the Ems , which flows into the North Sea, would be a river, but the Danube tributaries, Inn and Tisza , which carry significantly more water , would not.

A widely used technical language system for classifying rivers by size is the river order number . In this system, the smallest flowing waters (usually spring runoff) form the first order. If two waters of the first order unite, a flowing water of the second order arises. With the confluence of another second-order body of water, a third-order body of water is reached, etc. It should be noted that the confluence of smaller rivers with a higher-order body of water does not increase their order. Confusingly, a further classification of flowing waters of the first, second, sometimes also third order, which results from German legislation, has to be distinguished from the so defined river orders; this has nothing to do with the flow order numbers. It is essentially a question of who is obliged to maintain the water. Compare with order (waters) .

Today, a total of twenty-five types of running water are distinguished in Germany. In addition to the size of the body of water and the gradient (see longitudinal profile of the river ), the ecoregion (e.g. Alps, low mountain ranges , North German lowlands), the altitude and the geology of the catchment area (carbonate or silicate) are important parameters .

Division of rivers into sections

The division of rivers into the upper , middle and lower reaches is mainly based on the gradient, which is greatest in the upper and lowest in the lower.

Longitudinal zoning according to fish regions

In addition, and in addition to the hydrological classification, water bodies are divided into zones according to their community (technical term: biocenosis ). The oldest system in use divides these into fish regions according to so-called guide fish . A distinction is made from the source: trout , grayling , barbel , bream (or lead) and flounder region.

In limnology river in to the river longitudinal profile in the Krenal (source region), the Rhithral (Bach Region) and the potamal (River Area) divided. The rhithral roughly corresponds to the trout region, the potamal to the other fish regions (no fish live in the krenal). This zoning goes back to the limnologist Joachim Illies , it is still used and refined today.

Running waters are classified into running water systems, which are named after the largest river or stream into which the others flow. These are hierarchically organized by river code numbers , which each contain all information about the estuary. The naming follows not exclusively hydrological, but also z. T. historical classifications. Hereafter z. B. the Eder is run as a tributary of the Fulda and the Inn as a tributary of the Danube , although each is an equal confluence. The Regnitz is even classified as a tributary of the Main , although it carries significantly more water at its confluence than the Main itself. This is due to the historical naming.

In the European Union (EU), the ecological status of rivers and surface waters (such as groundwater ) is analyzed according to Directive 2000/60 / EC (EU Water Framework Directive, WFD) according to various criteria and classified according to five grades: “very good “,“ Good ”,“ moderate ”,“ unsatisfactory ”,“ bad ”.

According to a response published by the German government at the beginning of April 2018 to a parliamentary question from Bündnis 90 / Die Grünen , most German rivers and streams are in an ecologically poor condition: in 93% the communities of fish, plants and small animals that are actually found there no longer live 79% are said to have "significantly or completely changed in their structure" through human expansion. According to the EU criteria, only 6.6% of the assessed river sections are in “good”, 0.1% in “very good” condition. According to the Federal Environment Agency, bodies of water and floodplains are still endangered habitats . The most frequent reasons given for a moderate, unsatisfactory or poor condition of the investigated waters are agricultural pollution (e.g. from fertilization or the use of spraying agents ) as well as straightening , barriers or interruptions by weirs . However, active pharmaceutical ingredients and metabolites can also pose a risk to aquatic organisms .

In order to improve the situation in rivers, WWF Austria calls for the prevention of water and species-damaging subsidies in connection with green electricity, agriculture and forestry subsidies, etc.

The parameters catchment area and length are largely fixed; Relatively constant mean values ​​can be specified for the parameters width, depth, discharge and flow velocity . There are also some other parameters of rivers that are subject to significant fluctuations. Their observation is also part of the tasks of hydrology and limnology .

Biological quality : The biological quality of running waters is divided into water quality classes based on the saprobic system . The River Continuum Concept offers a currently widely accepted ecological classification .

Depending on the flow speed , rivers have the ability to transport debris :

Small, but also larger bodies of water can either carry water all year round or dry out temporarily, even rivers (see karst waters ). In karst waters in particular, areas in which the surface runoff regularly dries up are called stream shrinkages or ponors .

( Temporary ) rivers that fall dry can periodically carry water (e.g. regularly dry out in midsummer) or episodically , i.e. H. only briefly carry water at all (e.g. after heavy rainfall such as wadis or when snowmelts ).

Creeks that naturally dry out periodically have an independent community with specialized species.

The demarcation between running water and standing water (or standing water ) is usually trivial and immediately understandable. Numerous lakes - so-called river lakes - and other standing waters are traversed by rivers. In addition, the man many rivers, including almost all major rivers of Central Europe, dammed by dams for hydroelectric power, to improve the navigability and flood protection and river so in a chain of has impoundments converted or even outright reservoirs inserted. As a result, in many cases it is not easy to say whether a certain body of water can be characterized as a dammed stretch of flowing water or a standing water through which it flows.

The retention time of the water in the standing water is used as a delimitation, i.e. the time at which the inflow and outflow theoretically have exchanged the entire volume of water in the lake. With dwell times of up to three days, it is a flowing water. A lake is characterized by dwell times of more than thirty days. The value range in between forms a transition area and cannot be clearly assigned. Such waters have some properties of standing waters, others of flowing waters. Their biocenosis also has a transitional character.