The brown trout ( Salmo trutta fario ) is a to the salmonids counting predator and a subspecies of trout . It is the main fish of the trout region and is also called river trout , mountain trout or fario . Small brown trout in nutrient-poor waters are known as stone trout . Brown trout are 20 to 80 centimeters long, depending on the food available; in exceptional cases, sizes of one meter and weights over 15 kilograms are possible. Their back is olive-black-brown and silvery blue, red spots with a light border appear on the belly, the belly is white-yellow. The brown trout usually weighs up to two kilograms. Brown trout can live up to 18 years.

Brown trout colonize fast-flowing, oxygen-rich, cool and clear waters with a gravel or sand bottom in almost all of Europe, from Portugal to the Volga , as well as Central Anatolia and the Caucasus region . In the north they occur as far as Lapland . They are absent in Greece , Corsica , Sardinia and Sicily .

Brown trout are fish that are very faithful to their location, they only leave their place to reproduce and, as a rule, return to their traditional places even after disturbances. The adult brown trout claim their own territory. During the day she is hidden in the shadow of the shore with her head against the current.

Depending on their size and habitat, they feed primarily on insects and insect larvae living in the water, small fish such as the bullhead , smaller crustaceans , snails and other aquatic animals. Cannibalism is also often observed in brown trout. They are fast swimming hunters, but mostly pick up prey that drifts past in rivers and streams. 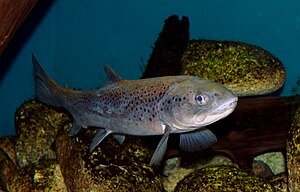 Brown trout spawn between October and January. With quick movements of the caudal stalk and the caudal fin, the fish fan shallow pits in stony ground, in which they lay about 1000 to 1500 reddish four to five millimeter eggs in several pits. The eggs are then inseminated by the male. The fish larvae hatch after two to four months.

The brown trout is of particular importance as a host fish for the glochidia of the freshwater pearl mussel .

Since the trout occurs in spatially delimited habitats, there are various other subspecies of Salmo trutta in addition to the brown trout Salmo trutta fario . See trout systematics . 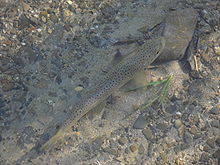 Well camouflaged brown trout in a small body of water 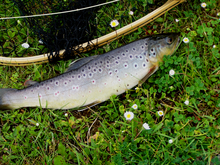 Brown trout caught with a fly

In the past, European waters have been heavily stocked with the rainbow trout from America , which has fewer demands on water quality and is faster-growing. It is controversial whether the brown trout can be displaced as a result. Today it is produced in ponds with almost the same success as the rainbow trout, also for restocking the waters. In order to protect the native fish species, the stocking of foreign species has been restricted for several years.

The brown trout is an excellent food fish .

The brown trout is very popular with anglers . It is mainly fished with artificial bait . Fishing with natural bait (worms, maggots, grasshoppers) is frowned upon on most bodies of water, as swallowing this bait quickly and, above all, makes it very difficult to release as uninjured trout as possible, which have not yet reached the minimum size .

Fly rods are used to catch brown trout . Medium-sized wet and dry flies are thrown into streams with a rod of AFTMA class 4–6 and are intended to simulate the fish as a hatching or egg-laying insect . You can also fish with a spinning rod in some waters . A light spinning rod and various artificial baits such as blinkers and spinners should be used for this. One should be careful with the use of wobblers and rubber fish, as they are forbidden in some waters or may only be used with restrictions.

Furthermore, the brown trout can not only be actively tracked with fly rods and spinning rods, but also passively by swimmer fishing and bottom fishing. Here a bait is offered on a hook. This hook rises from the bottom when bottom fishing and sinks from the water surface when swimmer fishing. The big difference to active fishing is that the bait is not constantly moved, but waits for the brown trout.

In the case of brown trout, according to initial reports since the 1980s in the Alpine region (Switzerland, Austria, Germany) there have been repeated fish deaths with losses of up to 90 percent. Due to the development of a visible, black pigmentation of the skin in the course of the disease, the term black brown trout phenomenon, black trout disease or black trout syndrome or Proliverative Darkening Syndrome (PDS) is derived. Sick animals usually stand lazily near the shore and then usually perish in phases of low water in the period from July to November. Affected pre-alpine rivers are z. B. Amper , Iller , Isar , Mangfall and the Thur . Researchers at the Technical University of Munich led by Prof. Ralph Kühn were able to attribute this phenomenon to a viral disease.