The family of salmon fish (salmonids), even salmon or trout fish called numerous genera and species includes popular food fish , such as salmon , trout , whitefish, grayling. It is the only family of the salmon-like (Salmoniformes) and is divided into the three subfamilies Coregoninae , Salmoninae and Thymallinae . Notwithstanding, the Coregoninae are also placed in their own family.

Salmon fish originally lived exclusively in the northern hemisphere, in Europe , Asia , with the exception of the Arabian Peninsula , the Indian subcontinent and Southeast Asia , in western and northern North America , on Iceland and on the coast of Greenland . Salmon fish either live their whole life in fresh water or are migrating species that hatch in fresh water, then migrate to the sea near the coast, live there for a few years and migrate back to their hatching waters to spawn. There are six native species in Europe and six others that were introduced by humans from North America.

For economic reasons, some salmonid species have also been naturalized by humans in other parts of the world, including in countries in the southern hemisphere with a moderate climate, such as New Zealand , South Australia, Argentina and Chile , but also in the Andean regions of Peru .

Salmonids have an elongated body that is oval in cross section. Their fins only have soft rays . The pelvic fins are in the middle of the body. In almost all species there is a small adipose fin between the single dorsal fin and the caudal fin . The spine consists of 50 to 75 vertebrae, the last three vertebrae, in the base of the tail, form an arch pointing upwards. The gill apparatus comprises 7 to 20 gill rays (4 gill arches), some of which, in plankton eaters, are designed as fish traps. The lateral line organ is well developed and complete.

Differences between the subfamilies

The Coregoninae (whitefish and relatives) have a small mouth, large scales , fewer than 110 along the lateral line organ, fewer than 16 rays in the dorsal fin, no teeth on the maxilla and only small or none on the vomer . They are solid gray, whitish or brown.

The Thymallinae ( grayling ) have a small mouth, medium-sized scales, more than 17 fin rays in the very large dorsal fin and teeth on the maxilla.

The Salmoninae ( trout , salmon and relatives) have a large mouth, small scales, more than 110 along the lateral line organ, fewer than 16 fin rays in the dorsal fin and strong teeth, also on the maxilla. The males often develop a hook-shaped upper and lower jaw with age. They are often very colorful.

All salmonids prefer cool waters, mountain streams and rivers as well as deep cool lakes. They feed on carnivore , the small-mouthed Coregoninae on zooplankton, the other species also on larger crustaceans and smaller fish. All salmon fish spawn in fresh water over gravelly or stony ground. To do this, the female knocks out a spawning pit with violent tail movements. The development of the eggs in the cool spawning waters takes 1.5 to over 6 months.

During the Ice Age, many populations were repeatedly separated from one another and isolated into small and very small bodies of water. In this way a large number of closely related species, subspecies and forms emerged, the relationship of which is insufficiently known. When brought together, many species will hybridize again.

There are eleven genera and about 225 species: 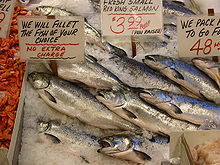 Salmon in a Seattle market

Salmon fish are tasty food fish , are caught by professional fishermen , bred in aquaculture and pond farms and are also popular with amateur anglers . In Europe, 300,000 tons of Atlantic salmon from aquaculture come onto the market every year. The amount of income from fish farms now far exceeds wild catches.