Fish pond is a redirect to this article. Further meanings are listed under fish pond (disambiguation) .

Fish farm near Šentrupert in Slovenia

The fish farming of inland fish using conventional methods is called pond management . For this purpose, one mainly uses artificially created ponds that are systematically managed. This makes pond farming a part of agriculture , especially animal breeding . It can also be seen as the “classic” branch of aquaculture . 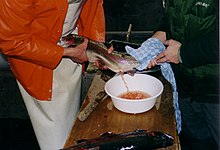 Stripping off a Rogner 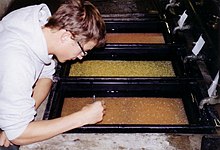 There are essentially two basic forms of pond farming:

The two forms of pond farming differ fundamentally in the use of natural food in carp pond farming and artificial pellet feed in trout pond farming. They thus occupy different places in the production structure of the biosphere .

For individual purposes, pond management also uses methods other than pure pond management. The incubation and brood rearing usually takes place in plastic basins in hatcheries, the water of which is usually provided by well or spring water. Some companies specialize in the production of juvenile fish and keep them in round tanks until they are sold to rearing companies.

The carp pond industry uses the primary production at the site with its natural food . The biomass produced in the pond by plant organisms ( algae and macrophytes ) is passed on directly via the food chain of the pond ecosystem to the final links of production, the fish. On the way there, zooplankton as well as worms and snails in the benthos are involved. In the production of pike and pikeperch the carp and other small fish (e.g. roach and moderlieschen ) also serve as additional links. The basis of the pond ecosystem is formed by mineral nutrients such as water and carbon dioxide for primary photosynthesis , nitrogen compounds such as ammonium and nitrate , phosphate and, as a sulfur source, sulfate for the further development of the biomass. These nutrients also take part in the material cycles of the ecosystem and are z. Partly deposited in the sludge and put back into circulation and used in later production periods.

As a rule, the nutrients are already available from the incoming water, but are also added to intensify production in the form of mineral fertilizers or organic manure (sheep dung, cow dung, grass clippings). It is true that the fertilization of a body of water leads to its eutrophication . However, this is desirable in carp ponds. Their negative consequences in lakes are largely eliminated due to the design as shallow water from approx. 1–2 m depth.

In addition to fertilization, in traditional carp pond farming, grain or soy is added in autumn to condition the fish for wintering.

The trout pond management uses the water exclusively as a transport medium for oxygen in the pond and for the disposal of the excrement and excreta of the fish (carbon dioxide and ammonium). Today, fish is fed almost exclusively from industrially produced pellet feed with a proportionate composition of protein , fat , carbohydrates and crude fiber as well as set contents of minerals , trace elements and vitamins guaranteed by the manufacturer .

The origin of the raw material for these pellets is important from an ecological point of view. They consist mostly of fish meal and fish oil . These are obtained from marine fish that are not marketed directly for human consumption. For example, off the coast of Denmark, the bottom fish sandeel (not related to the eel ) is collected en masse with bottom trawls and processed in factories into flour and oil, which are then delivered as raw materials to the actual feed manufacturers.

Trout pond farming is therefore not actually a production of inland fish, but a form of refining marine biomass. Similar to this level of the food pyramids, the degree of utilization is always in the order of 1:10 (rule of thumb). The feed industry is doing a lot to improve the feed quotient (feed expenditure divided by increase), but it cannot fall below certain natural limits. Don't be fooled by the official feed quotient of approx. H. 1 kg of dry food is required for 1 kg of trout growth. The dry food itself is free from 80 to 90% water content of the sea fish, so that in the end the 1:10 rule is almost fulfilled.

The ecological assessment of trout pond farming is therefore related to the overfishing of the seas and the destruction of communities on the sea floor.

Promising studies are currently underway to recruit the protein content in trout feed from vegetable sources. Vegetable protein sources that can be used are: corn gluten , soy products , green alfalfa meal , dried brewer's yeast , flaxseed meal and wheat germ . Attempts are made to simulate the amino acid frequencies of the fish meal by suitable mixing. At the same time, experiments are being carried out with the carbohydrate and fat content. Plant-based substitution of the fish meal seems possible based on the growth of the fish. The meat quality that can be achieved in trout has not yet been clarified.