The title of this article is ambiguous. Further meanings are listed under Zander (disambiguation) .

Zander from the front

The pikeperch ( Sander lucioperca , Syn . : Stizostedion lucioperca , Lucioperca sandra ), also called Sander , Schill , Pike perch , Zahnmaul or Fogosch , belongs to the family of the perch (Percidae). It is the largest perch species living in freshwater in Europe. It lives in Europe from the river basin of the Rhine to the Urals and in western Asia in north-western Turkey and around the Caspian Sea . Zander can also be found in the brackish water of the entire Baltic Sea . They are absent in the northern part of the Scandinavian Peninsula, in the far north of Russia and in the southern Balkan Peninsula . Due to restocking measures, it has also spread in Western European waters. In Italy today it occurs at least in the Po .

The terms Sander and Zander have been used in German-speaking countries since the 16th century, with preference for Sander in lexical entries until the 20th century. It was not until the 1930s that today's common spelling with Z was standardized. The name comes from the Middle Low German sandat , which may have been borrowed from Slavic in accordance with the Eastern European origin of the fish (cf. the older czandas in West Prussia and Upper Sorbian sandak and Polish sandacz ). In Austria the fish is called Fogosch or Fogasch (from the Hungarian fogas , which contains the Hungarian word for 'tooth') or, as in parts of Lower Bavaria , Schill . Other regional names are also known: Amaul, Canat, Nachmaul, Sandar, Sandart, Sandbarsch, Sandel, Saumert, Schiel, Schindel, Süllő (in Lake Balaton ), Zannat and Zant.

Zander with its mouth open

The zander has an elongated, spindle-shaped body. As a representative of the perch-like species, the pikeperch has two dorsal fins, the front with spiked rays and the rear with limb rays. The head is pointed, the mouth is deeply split. The long, pointed fangs next to small brush teeth stand unevenly in it. The front edge of the gill cover is serrated. The body has small comb scales . It is greenish-gray on the back, silver-white towards the belly, streaked on the top, cloudy brown, also darkly banded, marbled brown on the head and blackish speckled on the fins.

The pikeperch lives as a predatory fish in slow flowing rivers, canals, lakes and harbors in Europe. It can be found in the Elbe , Oder and Danube regions and now also in the Rhine , Moselle and Weser regions due to occupation . It lives in deeper waters and grows very quickly.

He hunts smaller fish such as roach , gustern , perch or bleak . Pikeperch prefer large bodies of water with a depth of at least four to five meters.

The pikeperch spawns in spring (usually April to June) at 12–15 ° C water temperature on deeply grounded 1–3 m deep bank areas where it builds shallow spawning pits. The 150,000 to 200,000 eggs per kilogram of body weight are deposited individually and stick with their sticky shells to stones and parts of plants. The male stays at the nest and protects the clutch from silting up and from spawning predators. The development until hatching of the 5–6 mm long larvae takes about a week. After consuming the yolk sac, they first feed on zooplankton, but after just a few months they attack the brood of other fish species. They are 6–10 cm long in autumn. The males become sexually mature after 2–4 years, the females after 3–5 years at lengths of 35–45 cm.

The pikeperch is becoming more and more important as a predatory fish compared to the pike , especially because it can spawn in the central European river systems designed by humans, while the pike usually no longer finds suitable spawning areas (floodplains, underwater plants, reed edges). The pikeperch also has an advantage here because of its pronounced ability to see in murky waters and in relative darkness. Compared to the perch, the pikeperch is distinguished by better hearing, which is achieved by two front swim bladder horns that develop in the direction of the labyrinth.

Due to its preference for small fish (due to the relatively small mouth) it can be dangerous for small fish species, which is why stocking measures must be viewed critically from the point of view of nature conservation. However, this is only the case if the affected fish is an important part of the affected ecosystem. The population in waters with a low population of pikeperch can be significantly influenced by the targeted stocking of small fish. 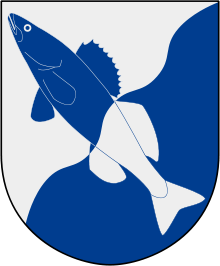 Several places in Sweden have pikeperch in their coat of arms - here Joss.

The following paragraphs are not adequately provided with supporting documents ( e.g. individual evidence ). Information without sufficient evidence could be removed soon. Please help Wikipedia by researching the information and including good evidence.

The pikeperch is a popular target fish in sport fishing . It is considered a shy, cautious fish that is difficult to outsmart. Particularly large specimens over 90 cm in length and 7 kg in weight are extremely rarely caught. The largest, officially measured and weighed pikeperch caught with a rod in Germany was 106 cm long, weighed 15 kg and came from the Danube. Small roaches , rudds and perches are particularly suitable as bait . Other good bait fish include bleak , gudgeon, and ruff . In principle, it is important to ensure that the bait fish are slim. High back such as B. Bream are often spurned. Alternatively, you can use fish scraps or halves. As Lures suitable rubber fish (shad), blinker , wobblers and Twister. Also fly fishing with sinking line and streamers can be successful. All baits should be 8–20 cm. Black bait catches particularly well at night, as its color contrasts with the surrounding area. In exceptional cases, pikeperch are also caught for worms, maggots and crabs.

Places where there are many small fish are particularly promising. In lakes these are the sharp edges and underwater mountains (the so-called perch mountains). In canals and shallow ponds, you should look for pikeperch on the bank in front of reeds and water lily fields or on groynes and sheet piling. Fairways and other depressions are also good fishing spots, especially in the colder months of the year.

On frost-free days, fishing times are mainly the evening and night hours and, in the case of frost, midday. A specialty of the pikeperch is that in deeper lakes it dares to venture into the shallower water regions at night, where it is easier for anglers to catch. For this reason, this predatory fish is also preferred to fish at this time of the day, which is, however, much more relevant when using natural bait. The catchiest months are May and June after the spawning season and September to December. The large specimens in particular are caught in the cold season. The fishing months can vary and depend on the water. Especially at high tide, the pikeperch can be found in the quiet places in the river, where targeted fishing for them is worthwhile. But also on the edges of the currents in the large rivers, large pikeperch are caught during frost.

The pikeperch is an important and valuable food fish with particularly firm, white meat (boneless fillets).