from Wikipedia, the free encyclopedia
This is the spotted version , flagged on April 4, 2020 . There is 1 pending change that has yet to be viewed. 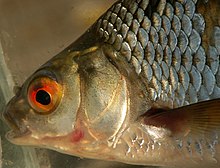 Roach - close up of the sidelines

Roach caught with a feeder rod

Roach close to the ground

Exhibition "Under the Vltava Mirror", Prague

The roach ( Rutilus rutilus ), also known as the roach , loggerhead or swallow , is a fish from the whitefish family (Leuciscidae).

The roach reaches a length of 25 to 50 centimeters, a weight of up to 3 kilograms and has a high-backed body with a greenish upper and white belly. Eyes and fins are reddish. The shape and color of the body can vary depending on the type of water. Roach are slimmer in running waters and have a silvery scaly color on the side and in quarry ponds, for example, high back and a slight gold color. A particularly striking feature is the bright red iris , hence the name. In addition, the roach does not have any jaw teeth, but uses what is known as the pharynx to chop up its food.

Morphological differences between roach and rudd

The roach is often confused with a related species, the rudd ( Scardinius erythrophthalmus ), because they look very similar. The species differ, however, in the position of the ventral and dorsal fin: While both fins of the roach are at the same height, the ventral fin is slightly pulled forward to the rudd. The distinction is even easier on the basis of their mouths: the rudd has an upper mouth and the roach a terminal mouth .

In addition to these notes, the fact that the roach between the ventral and anal fin has a rounded abdominal edge in contrast to the keeled abdominal edge of the rudd and that the eyes (often only identifiable in comparison) are really red in contrast to the golden yellow of the rudd is used to differentiate. Another feature is the number of scales in the sideline. If the roach has between 39 and 48, this is 40 to 42 for the rudd. Another, very similar fish is the Aland , which has significantly smaller scales (55 to 60) and a yellow eye circle. The spawning season usually begins in May and usually ends in August.

Hybridization with other species

There are often hybrids between roach, rudd, aland and bream, i.e. natural crosses, provided that these species spawn at the same time in the same stretch of water. A clear determination of membership or non-membership is sometimes only possible on the basis of a DNA analysis .

Research has shown that roaches have been native to Eurasia since the Pliocene . Gene centers are from Greece to Siberia , the western catchment area of ​​the Caspian Sea, the Danube to the Dniester Basin and the coastal region of the Black Sea. The roach lives as an undemanding schooling fish in stagnant and slowly flowing waters in almost all of Europe north of the Alps and the Pyrenees to the Urals . It also lives in the British Isles and in the brackish water of the Baltic Sea , but is absent in northern Scandinavia and the southern Balkans . Roach move in large flocks from the Szczecin Lagoon to the Uecker river in spring to spawn.

Roach were introduced outside of their natural range in Cyprus , Morocco , Ireland , Italy , Spain and Australia , where they can displace native fish species due to their high reproduction rate.

In Great Britain , the relationships between the occurrence of zooplankton and the roach population, which influence each other in a 2-year cycle, were investigated. Depending on the age of the fish, different small organisms are preferred as prey. Roaches can live up to a maximum of twelve years in captivity.

Roach are less prone to water pollution and can form populations in a number of different water habitats.

Only cold trout streams with a high flow speed and clear mountain lakes with low water temperatures all year round are usually not colonized by roaches. Roach are generally considered to be a highly adaptable Eurocean and ubiquitous fish species that can colonize a wide range of waters with different ecological conditions. This also includes regulated rivers such as canals for inland navigation and docks. They can also be found in dams up to small ponds. Roach can also be found in brackish water.

Roaches keep in rivers preferable to overgrown with algae stone packs because they here amphipods capture. Small roaches can also penetrate shallow trenches only 20 centimeters deep and colonize small pools with spawn that adheres to the plumage of waterfowl. In marginal waters with no predatory fish population, roaches usually remain small with an average weight of 100 grams and become sexually mature prematurely. Since they are sexually mature at two to three years of age, mass development and fouling can quickly occur. Roach are the main prey fish for pike and pikeperch .

Roach are pronounced schooling fish that can be found in the mean water as well as in flatter, low-current bank sections with vegetation. Roach and perch make up the largest proportion of fish biomass in most waters, which can only be exceeded by carp and bream in murky waters.

In winter roach retreat to deeper stretches of water, in flowing waters they can often be found in large swarms in docks with little current and in certain areas of the river channel.

Roach's diet consists on the one hand of various aquatic plants such as B. waterweed , milfoil ( Myriophyllum ), duckweed and chandelier algae (Characeae) and on the other hand and mainly from various small animals such as zooplankton , worms, insect larvae, insects , small snails and mussels . They spawn from April to May at water temperatures of 6–10 ° C. The males develop a spawning rash in the form of pearl-like growths on their heads. 50,000 to 100,000 (based on 1000 g body weight), 0.9 millimeter large, sticky eggs are laid on stones, wood or in vegetation. The spawning process is often very noisy and can attract predatory fish. The larvae hatch after four to ten days and initially adhere to the substrate. Only after they have used up the supply of yolk sac do they swim free.

The roach is used as a bait fish for fishing for predatory fish such as pike , perch , catfish , eel and pikeperch . Otherwise, it is a popular fishing fish for beginners, mainly because of its easy catch and its frequent occurrence. Roach respond to baits like worms and maggots as well as vegetable baits like corn and bread. The "catchiest" is a light pose assembly, in which the bait is presented close to the ground on flat and reed-covered banks, since roaches naturally look for food in such water areas. The largest roach caught on a line in Germany in recent years weighed 2.49 kilograms and came from the Neckar . A similarly heavy specimen came from the Mittelland Canal near Braunschweig in 2005 , another record fish of 2.62 kilograms was caught on the Weser in 1981 . Roach are suitable for the cold water aquarium as well as for the garden pond due to their modesty.

The roach as a food fish

Roach are especially important as a food fish in Eastern Europe . They taste very delicate. Only because of its fine bones is the fish not so popular in the kitchen. To make the fish edible, you can cut ( cup ) the fillet several times before deep-frying . Poached fishballs or meatballs should also taste very good . Another method to get the fine bones under control is to soak the roach in vinegar for several days and thereby dissolve the bones.

Other species of the genus Rutilus are, for example, the female nerf ( Rutilus pigus ), which differs from the roach only in terms of smaller scales, and the pearlfish ( Rutilus meideringi ), which live in rivers and lakes in the Alps, and have very small scales , which are up to 55 centimeters long . The southern European roach ( Rutilus rubilio ) differs from the roach in that it has a smoky gray longitudinal band that extends from the head to the caudal fin, and it is usually more elongated. Southern European roaches often only reach 200 g body weight and 25 cm in length and are widespread in Italy , Dalmatia , Croatia and western Greece in the catchment area of ​​the Adriatic . Rutilus heckeli occurs in the Black and Azov Seas and rises in rivers to spawn. In the Caspian Sea , too, there is Rutilus caspicus, a migratory form adapted to the brackish water.

The roach is classified as Least Concern in the IUCN's Red List of Endangered Species , as no major threats can be identified.