The following important information is missing from this article or section:
economic significance outside Europe; Importance for fish farming
Help Wikipedia by researching and pasting it .

The perch ( Perca fluviatilis ), at the Bodensee Kretzer , in Switzerland also Egli called, is a throughout Europe occurring freshwater fish . The IUCN classifies the perch as “not endangered”.

Its split dorsal fin (typical of many perch-like) and the reddish color of the pectoral and pelvic fins are typical. The pelvic fins are on the chest. Both dorsal fins (especially the anterior one) and the anal fin are equipped with sharp spiked rays (hard rays) (see picture). The skins between the fin rays often have isolated black spots of various sizes. As with many other fish species, the dorsal fins of the perch can be folded up like a fan and folded backwards. When encounters with perch this often means that the two dorsal fins characteristic of the species remain hidden from the viewer's eye.

The body has a striped pattern of 6-8 vertical stripes and is gray-green in color. The mouth is slightly above (the lower jaw protrudes over the upper jaw), almost terminal.

Depending on the food available in the water, perch reach an average length of 20 to 40 centimeters and rarely weigh more than one kilogram. But there are also bodies of water with many large perch, such as the mouth of the Rhine delta, where fish over 50 cm are regularly caught. Even specimens larger than 60 cm are reliably documented, but the absolute exception. However, some river perch origins grow extremely slowly. When they are 8 to 10 years old, they are only 25 cm long. However, Tesch (1955) and Thorpe (1977) also found significantly more “vigorous” populations, which even as four-year-old perch can have a total length of 25 cm. In addition to genetic factors, the growth potential is based on the food supply and other water conditions.

Reproduction and way of life 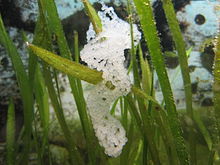 The adult animals spawn in the littoral between March and June in the form of spawning tubes, which can tear open secondary to irregular spawning bands (also called spawning strings) and form a typical net pattern. After hatching, the larvae rise to the surface to fill their swim bladders . The currents drive the larvae into the pelagic area , where they feed on small zooplankton . After a few weeks, the yearlings return to the littoral. There is often a change in diet to macrozoobenthos (including insect larvae). In mesotrophic and eutrophic lakes, schools of young perch compete with cyprinids , such as the roach ( Rutilus rutilus ), for zooplankton and zoobenthos. From a certain size, perch can become piscivorous depending on the food available . They then feed partly cannibally on smaller perches, but especially on cyprinids or other "mouth-friendly" fish. The macrozoobenthos feeding phase is not absolutely necessary to become piscivor. In very productive lakes, even large perch can continue to feed on plankton and benthos and do not become piscivorous. Conversely, perch can establish themselves permanently in smaller, oligotrophic waters by only reaching sexual maturity by eating young animals of their own species.

In deep lakes the perch overwinter individually at great depths. The animals need temperatures of 6 degrees Celsius and less for several months so that mature germ cells can develop in the gonads . According to Dreyer (1987), 150 days at 10 ° C are sufficient for German perch to mature fertile eggs in the female sex; the temperature range for obtaining mature sperm from males is even higher. Since the introduction of the ruff ( Gymnocephalus cernuus ) in numerous European lakes, the perch has had a new competitor. It is not yet clear how this will affect species composition over the next few decades.

The perch is not specialized in terms of its habitat and is very adaptable. It lives in flowing or standing waters; it is also found in the brackish water of the Baltic Sea and in higher mountain waters up to a height of approx. 1000 m above sea level. The perch avoids heavily muddy, shallow waters and prefers calm waters or slow-flowing rivers with deep and stony subsoil. In rivers, the perch prefers the bank zone. Young specimens of the perch live in schools near the shore in so-called " shallows ". Adult perch prefer deeper water areas and generally live solitary.

The river perch is widespread throughout Europe, with the exception of the Iberian Peninsula (with the exception of a population in the Ebro reservoirs), southern Italy and the west of the Balkan Peninsula. It lives in Anatolia in lakes near the Black Sea coast, in most of Russia, east to the Kolyma , but not in the Amur and the rivers south and south-east of it. The perch occurs in rivers up to arctic latitudes in the Republic of Sakha and in Magadan Oblast. It lives in brackish water in parts of the Baltic Sea and the Arctic Ocean , but is absent in the Caspian Sea . The fish was introduced to Australia and South Africa.

The Swiss Fisheries Association (SFV) declared the perch "Fish of the Year 2019".

In the past, the perch was often only associated with a section of water in the angling literature. Z. Simek, for example, speaks of perch as a deep fish in his fishing guide Freude am fishing (1975, ČSSR). On the other hand, it seems more correct that the perch is one of the most adaptable fish native to Europe and can therefore be found in almost all areas of a body of water that it inhabits.

The perch is therefore divided into the following three categories according to its habitat (especially) in larger lakes in the fishing world:

In all areas, however, it can be seen that perch "... have a special preference for structures in the water: the well-known perch mountains, posts of all kinds, anchored ships, sheet piling, etc., but also aquatic plants of all shapes."

As distinct predatory fish, perch can be outwitted with various artificial baits such as spinners, twisters, rubber fish of various (but mostly smaller) sizes. In addition, fishing with (dead) bait fish is very successful. Small fish such as small perch or ruff are suitable bait fish for this purpose. Angling with thaw worms is also very promising.

Perch from the Rhine

Due to its lean and bone-poor meat, the perch is one of the most important wild-caught food fish in freshwater in Central Europe and is valued by fishermen, anglers, cooks and consumers alike.

In Germany, the perch is of little importance in pond farming and aquaculture. In most cases the perch is kept in an intensive hot water circulation system. In Germany, the production volume is around 40 tonnes per year, which is only a very small part of the 56,000 tonnes that German inland fisheries generate annually.