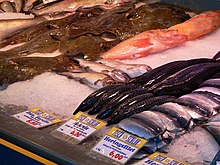 Edible fish at a weekly market 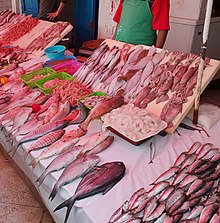 Edible fish are species of fish that are suitable for human consumption. Depending on the habitat , a distinction is made between freshwater fish and saltwater fish (sea fish). Some species of fish are found in both salt and fresh water, such as eel and salmon .

Since 1993, live fish has only been allowed to be sold to restaurants and resellers in Germany. It used to be the custom to keep live fish in the bath tub at home before they were freshly prepared (e.g. blue carp as a holiday food at Christmas).

Despite the main suppliers ( Denmark , Norway ) and their fishing grounds, which are mostly more distant today , fresh fish can be offered in roughly the same freshness as it was at the time when German fishing still supplied the market on a large scale thanks to improved transport logistics . Fish that is caught close to the coast in northern Norway, for example, and processed quickly, can arrive at a dealer in Munich after around three to six days . Strictly speaking, the fish is no longer fresh, but still edible.

Freshly caught fish is usually stored in ice in polystyrene boxes. Ideally, the ice will melt slowly, with the water running steadily over the fish, washing away the microorganisms that cover the dead fish. Fresh fish smells pleasant; If, on the other hand, it gives off a bad smell, it has either been stored too long or at too high temperatures and is therefore considered spoiled.

German food law does not define the term freshness in terms of time. "Fresh" means any untreated fish in melting flake ice is stored and at temperatures between zero degrees Celsius and two degrees Celsius.

The cooks consider fish to be “fresh” as long as the eyes are clear, the gills are dark red, the fish does not “smell like fish” and the meat feels elastic when applied lightly .

Frozen tuna in a Tokyo market

Frozen fish is often already on factory ships processed and shortly after the catch as a single fillet or TK frozen block. The early freezing means that there is no need to set up complex, time-based logistics for rapid transport. In addition, the raw material can also be caught where it is no longer possible to sell the fish fresh because of the distance. Therefore frozen fish is considerably cheaper than fresh fish.

There are many variations here. There are also saltwater and freshwater fish for smoked fish. There are two variants of the smoking process:

The fish are produced in freshly developed smoke and a core of heat of over 60 ° C. In general manufacturing specifications, the temperature range of the smoke is specified as 60 to 85 degrees Celsius.

The fish are made in freshly developed smoke with a heat exposure of below 30 ° C. In general manufacturing specifications, the temperature range given is up to 45 ° C, the temperature point at which the proteins of the collagen in the fish denature.

Sardines in a can

The fish is preservation preserved and packed. The fish is heated or food additives such as salt, vinegar and preservatives are added.

Canned fish is in a brine ("in its own juice") or in oil (mostly in vegetable oils ). Since fatty acids and fat-soluble vitamins can migrate from the fish into the oil, fish in oil-free brine is often mistakenly considered healthier, although water-soluble vitamins can also leak into the brine. The Swedish specialty surstromming , a particularly intensely smelling fermented herring , also falls into the canned fish category .

Canned fish, in a broader sense also in jars, also include ready-to-eat preparations , i.e. canned fish in marinades such as tomato or mustard sauce, fish salads and much more.

One form of processing is soaking in brine or a marinade .

For salted herring , real herrings are usually gutted on board the fishing ship and stored in brine. Salting preserves the fish and changes the structure of their muscle tissue. Then you can z. B. processed by placing in vinegar marinade to Bismarck herring or roll mops .

One variant is herring , which is matured in the brine using enzymes . There are Atlantic herring used, the end of May, are caught early June in the North Sea before their breeding season begins. Then they have a relatively high fat content (over 15%) and roe or milk are not yet developed. They are partially gutted (grooved); Parts of the intestine and especially the enzyme-containing pancreas remain in the fish. They are then marinated in brine for five days, traditionally in oak barrels.

Herrings are fried herring, which then in a vinegar marinade be loaded with spices. Other fish can also be pickled in this way.

Stockfish or clipfish is dried fish. In particular, cod with its low-fat meat can be prepared and preserved for consumption in this way. With stockfish (tørrfisk) the fish are tied in pairs by the tails and hung on wooden racks (stick racks ) to dry.

With the klippfisk , the cod's heads and entrails are also removed, but they are also salted to drain. After salting, they are then spread out on rocks ( cliffs ) to dry.

Laberdan is the name given to the cod, which is salted and packaged in barrels right at the fishing spot. The Laberdan is no longer made today.

Even in the second half of the 20th century, the economic importance of cod, which spread as a national food from Norway to Brazil, was so great that the so-called cod wars were fought for fishing rights far off the coasts of individual countries . Most of the cod caught in the disputed waters of Iceland were landed as fresh or frozen fish.

To this day, the preparation of dried fish in Cambodia is very widespread because of the hydrogeological properties of the Tonle Sap : the pronounced fishing season has most likely led to the need to preserve large quantities of fish for millennia. In the largest market in Cambodia's capital Phnom Penh (Phsar Orussey) there is always a large selection of dried fish.

From the inside of the fish, roe as caviar and shark livers ( cod liver oil ) and cod are processed for consumption. The liver of the cod is tasty and is sold under the name cod liver as a preserve, and it also provides the vitamin-rich cod liver oil. Freshly smoked cod roe is a real delicacy. In our domestic fish, the fatty liver of the burbot ( burbot ) is particularly tasty. The rod is the only representative of the cod-like species in European fresh waters.

Fish are usually an easily digestible source of protein that is very common. In many areas of the world fish is the staple food or the main part of the diet .

Since they were permitted  as a fasting food - at least in the area of ​​the western church - preserved sea ​​fish as stockfish or salted herring were already widely used in the Middle Ages .

In addition to the protein content, fish is important for the supply of people with iodine , various vitamins and trace elements . Most of the fat it contains consists of polyunsaturated fatty acids .

Fish accumulates various environmental toxins from its natural habitat, this applies in particular to mercury in the form of methylmercury in eels , mackerel , tuna , halibut and sharks . For this reason, swordfish weighing more than 80 kilograms are no longer allowed to be imported into the EU . In 2019 fish from the Ochtum were examined for PFAS . Due to the high exposure to PFOA , we do not recommend consuming the fish. Farmed fish can contain significant amounts of ethoxyquin , which is added to fishmeal for their feeding.

Preparation of the fish

Edible fish are prepared by poaching , boiling (as fish soup ), roasting , baking , grilling , deep-frying or cooking in a salt crust .

Some species (mostly marine fish) can be processed raw into sushi , sashimi or ceviche if they are either completely fresh or have been frozen and thawed immediately after being caught .

When canned, smoked , salted or marinated , fish are often a side dish for cold meals .

A panfish (literally: "pan fish", also written pan-fish or pan fish ) is a fish in English usage that is of a suitable size to be cooked in a pan as food , regardless of whether it is a predatory fish , whitefish , marine or freshwater fish .

In 2018, a total of 1.14 million tons of fish and seafood were consumed in Germany. This corresponds to a per capita consumption of 13.7 kg.

The market shares of fish and fishery products in Germany in 2018 were as follows:

The per capita consumption is divided into the following product groups:

86% of the edible fish and fishery products are imported. The most important countries of delivery are:

The consumption of fish in the 2010s was almost 70,000 tons per year (2014: 68,000 tons), that is around 8 kg per capita (for comparison meat : 65 kg). The vast majority of this comes from imports, only about 5% from domestic production. In 2019, the Austrian " Fish Dependency Day " (see ecological footprint ) was already on January 17th, and for the rest of the year the state is now dependent on imports.

The import comprises 90% fish, otherwise molluscs and crustaceans in equal proportions. The fish imports are primarily the classic sea fish such as herring , sardine , tuna or mackerel . Freshwater fish take up about 1 ⁄ 5 of the amount, primarily salmon and eel . In imports, the finished goods (canned, marinated, vacuum-packed, processed and frozen) take up half of the amount, one third is fresh goods (chilled and / or frozen), 10% semi-finished goods (mainly smoked), a small proportion of around 5% are live goods (including stocking fish for later consumption). The main trading partner is the EU (around 80%), particularly Germany (a good half of EU trade).

The production of fisheries is predominantly aquaculture (fish farming, a good 90%; 2014: 3,500 out of 3,800 t in total), wild fisheries only play a subordinate economic role. The production comes almost exclusively from natural or water cycle integrated waters, enclosures and recirculation systems (aquaculture in the narrower sense) are only rarely represented. The fish species in production are mainly (live weight data 2014):