Shrimp is a redirect to this article. For the secondary ion mass spectrometer see Sensitive High Resolution Ion Microprobe 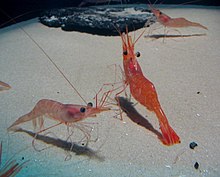 As shrimp , different types are in the bottom zone of living or free-floating crustaceans called. As a form taxon, the term combines crabs that are not directly related to one another in a group. Lobsters , lobster-like (for example " scampi " or Norway lobster ) and freshwater crayfish are often not counted among the shrimp (but see freshwater shrimp ).

Shrimp as a delicacy 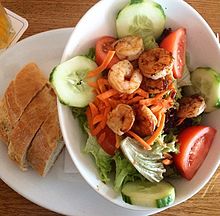 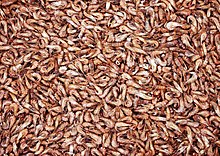 The catch is already cooked on board

Shrimp have an elongated, more or less cylindrical body with a thin shell that is slightly compressed at the sides. They have long antennas (“ feelers ”; the second antenna has a large scale at the base: exopodite ) and only have delicate grasping organs (“scissors”); the legs in the back of the body are transformed into swimming organs. The head usually has a forward-facing, elongated appendage, the rostrum .

Earlier shrimp were in a non-monophyletic subordination "Natantia" within the decapods summarized. However, not all species referred to as "shrimp" belong to the decapods. "Prawns" can be found today. a. in the following, e.g. T. not closely related cancer taxa: 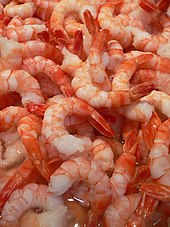 Shrimp on sale, with no head, legs, carapace and most of the exoskeleton

Shrimp from different family groups are highly valued as a delicacy . They are fished commercially or reproduced in shrimp farms . The trade names mostly refer to animals of a certain size class or origin, but do not necessarily correspond to belonging to a biological group.

The most frequently caught and farmed shrimp belong to the flagellated shrimp (Penaeidae) up to 10 cm long, for example the Japanese "Kuruma shrimp" ( Marsupenaeus japonicus ). Flagellated shrimp are often sold under the English name "Shrimps" (sometimes also "Schrimps") or, for larger specimens, "Prawns"; the term “Pacific shrimp” refers to different Penaeus species, some of which are also native to the Indian Ocean , such as “Black Tiger prawns” ( Penaeus monodon ). " Arctic sea shrimp" or shrimp and "Greenland crab" from the North Atlantic and North Pacific mainly belong to the species Pandalus borealis . The large "party prawns" and "giant prawns" ( Spanish trade name "Gambas", English "King prawns") are usually assigned to the species Litopenaeus vannamei and come from Indonesian or Thai breeding.

North Sea shrimp belong to the species Crangon crangon . They come from the North and Baltic Seas and are also known as "North Sea crabs", "beach shrimp", "garnet", "shrimp" (from French " crevette " - there also generally for shrimp), "leek", "knat" and "Gray crabs" offered. So-called table crabs , which have a certain minimum size, are marketed as food and are a popular delicacy in the countries bordering the North Sea. In Northern Germany , North Sea crab meat is traditionally used in a number of dishes and dishes.

In the aquarium hobby, too, shrimp, especially from the Caridea sub-order, are enjoying growing popularity and are sometimes traded at very high prices.