An exoskeleton ( ancient Greek exo , outside ' and skeletós , dried-up body', 'mummy'), also exo-skeleton , is a support structure for a body , which forms a stable outer shell around it. Along with the endoskeleton and the hydroskeleton , it is one of the three basic forms of skeletal formation in the animal kingdom.

Exoskeletons, for example, are characteristic of the arthropods , the largest tribe in the animal kingdom. Other animal phyla such as molluscs (Mollusca) and bryozoa (bryozoa) also have exoskeletons.

Cuticle of the arthropod 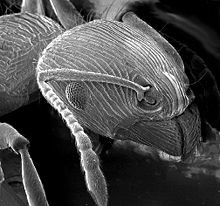 Head of an ant

In contrast to the vertebrates , all arthropods (Arthropoda) such as insects , jaw-claw carriers and crustaceans primarily have a stabilizing exoskeleton instead of an endoskeleton (inner skeleton) (only in the case of a few, mostly tiny, aquatic crustaceans, was it secondarily given up in favor of a hydroskeleton ).

The cuticle of the arthropod, which functions functionally as an exoskeleton, is a covering that is separated from the outermost cell layer (epidermis). It is a flexible, high-performance composite made of several components. The basic components are fibers made from chitin , a nitrogenous carbohydrate with similar properties to cellulose (which is why it is sometimes called " chitin armor " inaccurately ). 19 chitin fibers are placed anti-parallel to one another to form a crystalline bundle about 3 nanometers thick and 0.3 micrometers long, a so-called microfibril. The chitin microfibrils are enveloped by structural proteins that have a special binding site for chitin. (This protein component used to be called arthropodin when its structure was unknown . This term is out of date, but can still be found in older books).

Depending on the proportion and composition of the protein component, either a hard, firm or a soft, flexible cuticle is created. The firm and hard cuticula produces hardened plates (sclerites), limbs, hair, mouthparts and similar structures. The soft and flexible builds z. B. on the flexible shell of many insect larvae or keeps the hard sclerite mobile by activated joint membrane. Flexible cuticula contains around twenty, hardened cuticles can contain over two hundred different proteins, which are divided into twelve protein families that are similar to one another.

The process of hardening of the cuticle, known as sclerotization , is based on two processes that are hormonally controlled and complement each other during the new formation. On the one hand, water is excreted, causing the water-repellent (hydrophobic) components to stick together more firmly. On the other hand, part of the protein is firmly bound to a network structure. Dopamine plays a key role in this process . The compounds N-acetyldopamine (NADA) and N-beta-alanyldopamine (NBAD), synthesized from dopamine, are released into the cuticle, where they are enzymatically oxidized to highly reactive quinones . These react with the proteins and form a stable, no longer degradable network of covalent bonds. The cuticle sclerotized by NADA remains colorless or straw-colored, while the cuticle sclerotized by NBAD is dark in color. Some of the dopamine can also be converted into the dark pigment melanin , which is probably also involved in the crosslinking and thus further strengthens the exoskeleton. The differently sclerotized chitin-protein complexes, depending on their location and function, then in turn form fibers. These larger fibers join together to form plate-like associations. The finished cuticle consists of many such layers, in which the fibers are always more or less parallel. In the stacked panels, the direction of the fibers is always slightly offset from one another so that the overall structure is composed of fiber panels that are helically offset from one another (called the bodigand structure after its discoverer). This increases the strength significantly, similar to the construction of plywood panels from wooden lamellas, only that the individual lamellae in the plywood are at right angles to one another and not twisted in a helical manner.

Contrary to popular belief, the cuticle of the arthropod does not consist primarily of chitin, but of chitin and proteins and other components in roughly equal proportions. The chitin content is typically between around 50% (in flexible cuticula) and 15 to 30% (in hardened cuticula of sclerites) of the dry matter.

In many crustaceans and millipedes, the hardness of the cuticle is further increased by mineral deposits (very rarely also in insects and arachnids). This armor consists for the most part of calcium carbonate with a certain amount of phosphate and magnesium. The predominant part of this substance is amorphous and non-crystalline, a smaller part, especially in the uppermost, most heavily stressed layer, crystalline as calcite . Since calcium carbonate would actually crystallize spontaneously, it is only possible to keep it in an amorphous state through specially controlled separation. The magnesium and phosphate content play a role, but also special organic ligands that suppress crystallization. As a result, the phosphate component is also uncrystalline (the crystalline phase, called apatite , occurs as a biominer only in other groups of organisms. The exoskeletons of some extinct arthropods may have been made from it). The "lime" part of the shell is partially dissolved during the molting, temporarily stored in the body and re-built into the new shell. It has only been known for a few years that some arthropods with such armor reinforce it in particularly heavily stressed areas such as mouthparts, scissors and spines, through the inclusion of heavy metals such as zinc and manganese and through halogens such as chloride and bromide. It was proven that the hardness can be increased threefold by storing zinc. The form in which it is stored has not yet been discovered.

Other areas of the exoskeleton are not optimized for hardness, but rather for flexibility or flexibility. A family of rubber-like proteins called resilin gives them special properties . B. make a decisive contribution to the jumping ability of fleas.

As always with biological constructions, the exoskeleton is further optimized through the finest coordination of material properties and the shape of the components. Heavily stressed sclerites have rib-like reinforcements on the inside. Sometimes betrayed by lines (called sutures). The attachment points of the muscles are also often reinforced by indentations (called apodemes here). In addition, the cuticle bears a multitude of scales, hairs and outgrowths, including sensory hairs of the most complex internal structure.

Since in this particular case a complete body covering has hardened, which can no longer grow passively, the exoskeleton has to be completely shed during growth and then renewed again ( moulting ). Recently there have been indications that not only the arthropods, but also other molting invertebrates, whose cuticula has mostly remained relatively unhardened, form an evolutionary community of descent ( molting animals ).

The cuticle of the arthropod in the form shown forms almost no protection at all against water loss and dehydration, it is permeable to water vapor. Insects in particular have an extremely thin layer of waxy substances (e.g. long-chain hydrocarbons), called the epicuticle, as the outermost covering. This is excreted through pores of the cuticle after it has formed. Millipedes, crustaceans, and most jawbearers do not have such epicuticles. Rural forms therefore usually avoid direct sunlight. Especially nocturnal and soil-living forms of these groups can, however, be found in extremely dry, arid areas such as B. Deserts occur when they have hiding places during the day.

Shell of the molluscs

Mussel shells , snail shells or chambered shells like pearl boats or ammonites can occur in molluscs (see also →  Structure, growth and function of the shell of the shellfish ). Others have phylogenetically derived internal skeletons such as nudibranchs or some cephalopods a schoolp or corresponding rudiments .