The following important information is missing from this article:
anatomical / ontogenetic relationship to mantle ( 21:16, Jun 4, 2016 (CEST) )
Help Wikipedia by researching and pasting it .

As a shell or housings , including snail shell called the helically wound calcareous will shell of the screw , respectively. It is connected to the snail's body by two muscles and serves to protect the mollusc body from predators and injuries.

Evolution of the snail shell

The worm housing arose in the course of a long, already in the Cambrian incipient evolutionary process of calcareous shell plates and earlier molluscs . The shell formed from it is common to all members of the Conchifera . In contrast to the shells of mussels ( Bivalvia ), Scaphopods ( Scaphopoda ) and cephalopods ( Cephalopoda ) is the shell of the snail, but always wound spirally despite all the differences in shape and many external similarities to bowls this mollusc groups. Only the housing of the pearl boats , which are cephalopods, is also twisted .

Construction and shape of the shell

The term "thread" includes the Protoconch and Teleoconch up to and including the penultimate handle. The final deal with the estuary is called the base.

SEM image of the protoconch of the snail Haliotis asinina . The scale corresponds to 100 μm. The white arrow marks the transition from the (embryonic) protoconch to the juvenile shell section of the snail (right).

The shell is created in the snail's embryonic stage . The section of the shell that emerges at this stage of development is the embryonic thread or protoconch. It forms the tip (apex) of the housing, which can be clearly different in the further course. The shape of the protoconch is a feature that plays an important role in the identification of species - especially in palaeontology , since soft tissues are rarely preserved. This first part of the case is usually smooth, but it can also be sculpted.

The protoconch is identified as after its convolutions

The section following the protoconch, which takes up by far the largest part of the housing, is called the teleoconch. The growth strips and other features of the Teleoconch that characterize the sculpture usually appear in very varied forms, depending on the species. See the explanations in the relevant sections below.

Inner construction of the shell

Shell of the terrestrial snail Stenotrema florida . The periostracum of this species is covered with tiny hairs

The snail shell is built up in several layers. From the inside out, the layers are named: Hypostracum , Ostracum and Periostracum . The first two layers mentioned consist of aragonite , a lime material (CaCO 3 ). They form the stable "basic structure" of the shell. The periostracum, on the other hand, which can also be referred to as the shell skin, consists of a complex protein called conchiolin (also called conchin). This organic outer protective layer of the shell cannot be renewed in adult snails, since the glands located at the mouth, in which the conchiolin is produced, only work during the growth of the snail shell. At the same time, snails can repair injuries to their shells from the inside with the help of lime-secreting gland cells, but the "repair site" has a mostly clearly visible, coarser surface structure due to the lack of the periostracum.

If thin aragonite platelets are deposited on the inside of the shell, this inner shell layer (the hypostracum) can create dazzling effects through the refraction of light . This part of the shell, known as mother-of-pearl , occurs in some fresh and saltwater snails, especially abalones ( Haliotis ).

The spiral shape of the bowl 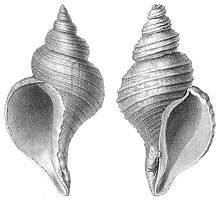 The snail shell runs from the apex to the mouth around its own axis, which is called the spindle (columella) when the passages touch. Otherwise a funnel-shaped cavity is created, the umbilicus. The reason for the emergence of this screw-like shell shape is to be found in the ontogenesis of the snail: One side of the visceral sac grows faster than the other, causing a rotational movement which in turn determines the helical shape and the direction of the spiraling of the shell. This process is known as torsion.

The shell of the snail can - mostly, but not always, depending on the species - be right-handed (dextral), as with most snail species, or left-handed (sinistral). If the upright housing (with the apex facing up) has the mouth facing the viewer on the left, it is called left-hand , in the opposite case right-hand . Left-hand snails are popularly known as snail kings.

The size, shape and pattern of the shell are often species-specific and are therefore important when determining the size.

Aquatic snails tend to produce larger forms than land dwellers due to the buoyancy in the water. Particularly among the marine snails there are very large species with sometimes very heavy shells, such as the great snail ( Syrinx aruanus ) that can be found in the marine area between Indonesia and Australia, which can reach a shell height of up to 1 m . On the other hand, among the recent snails forms can be found whose shell size is well below a millimeter (e.g. members of the family Omalogyridae ). 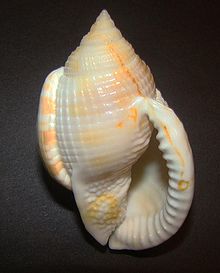 A plain varix (left in the picture) on the shell of the snail Semicassis granulata ; Orthoclinic growth strips

The surface of the bowl shows a more or less clear sculpture, the characteristics of which can be very differently pronounced.

In the simplest case, it consists of growth strips that arise in the growth phase. The course of these growth strips on the housing is described as follows (view of the upright housing, i.e. with the apex pointing upwards with a view of the mouth - as with the Semicassis granulata shown opposite ):

An anatomical feature that is closely related to the growth strips are the so-called varices (Sing .: Varix ). These are thickened axial ribs that usually appear at regular intervals on the circumferences and have been formed as a thickening of the outer lip during a dormant state in the growth of the screw. This shows that the growth of the snail took place in batches (see adjacent figure).

In addition to strips of growth and varices, cracks, furrows, stripes, keels, ribs, knots, spines and bulges can appear on the shell surface. If such features run parallel to the suture, they are called spiral ornamentation. Very fine lines or furrows are called Lirae (Sing .: Lira). If the bowl decorations are arranged obliquely or vertically (i.e. at right angles to the suture), one speaks of transverse decoration.

The mouth forms the end of the last contact (body contact, base). For the sake of simplicity, the edge of the mouth is divided into three areas below:

Spindle wall and mouth wall can converge at the bottom and form a canal that is quite wide in some species. This channel is also known as a siphonal channel or spout. The rear (outer) part of the spout is the stem (also called the shield).

There may be small beads on the edge of the spindle, known as spindle folds or spindle teeth. Spindle folds can also be found inside the housing; if the shell is intact, they are not visible from the outside.

With the help of a shell lid, snails can close the mouth of their shell. The foreleg snails are what is known as the operculum , which has grown at the foot of the snail. Other lid shapes are the epiphragma (mainly known from the Roman snail), which is temporarily formed from the body's own secretion for the purpose of protection against frost and dehydration , and the clausilium of door snails (Clausiliidae), which is firmly attached to the shell, but not to the soft body. Only this last-mentioned shape of the shell cover can be viewed as part of the snail shell. 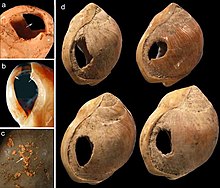 Pierced palaeolithic snail shells, which were recovered in Turkey , in the Üçağızlı cave and are interpreted as the remains of body jewelry ("pearl necklaces"), are considered the oldest pieces of jewelry of anatomically modern man ( Homo sapiens ) that were recovered outside of Africa; their age is at least 40,000 years. They are similar to old finds from the Ksar Akil cave in Lebanon. The shells of sea snails from the Sibudu Cave and the Blombos Cave in South Africa and from the Grotto des Pigeons in Morocco , which are also interpreted as jewelry, are much older .