The Paleontology ( ancient Greek παλαιός Palaios "old" ὤν ON , Gen. ὄντος ontos "being" and -logie ) is the science of living things and liver worlds of the geological past . The subject of paleontological research is fossils ( Latin fossilis "excavated"), that is, physical remains found in sedimentary rocks as well as other legacies and testimonies of living beings that are more than 10,000 years old. 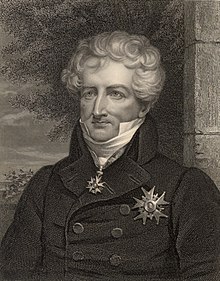 Baron Georges Cuvier is considered to be the founder of paleontology.

The French natural scientist Georges Cuvier (1769–1832) is considered to be the founder of modern paleontology, which works according to scientific criteria . The British geologist Charles Lyell (1797–1875), who contributed to the theory of the ice age , disproved his view that catastrophes completely wiped out life on earth and that humans were only created after the last ice age. At the same time, the French amateur archaeologist Jacques Boucher de Perthes (1788–1868) was the first to recognize human creations in stone artifacts.

The French Marcellin Boule (1881–1942) created the possibility of distinguishing human tools from naturally created forms with his eolite experiment from 1905. The Swiss doctor Otto Hauser (1874–1932) made the professional introduction to cave and excavation research in France ( Le Moustier ) . There he encountered resistance from local research.

The first German paleontologist to represent Darwin's theory of descent was Ernst Haeckel (1834–1919). He was a zoologist and brought the development of humans to research through hominids. His opponent was Rudolf Virchow , who called him the "monkey professor". Haeckel's suggestions were taken up by the Dutch anatomist, geologist and military doctor Eugène Dubois (1858–1940) and the German paleontologist Gustav Heinrich Ralph von Koenigswald (1902–1982).

Since 1997, 21 palaeontology professorships have been given up in Germany, and eight of 27 university locations have been completely deleted.

Analogous to the biology of recent living beings, neontology ("doctrine of new beings"), paleontology can be broken down as follows:

In addition, there is palichnology , which researches a wide variety of fossil traces of life (including footsteps and tracks , grave passages, traces of food).

The paleontology of macrofossils differs in its methodology from micropaleontology , which examines microfossils and the even smaller nannofossils with the aid of various microscopy techniques . Microfossils can be the remains of microorganisms as well as microscopic evidence of larger living things.

Paleontologists examine fossils and fossil groups of organisms from a variety of points of view and questions. A division into geologically and biologically oriented sub-areas is made:

Skeleton of the Seitaad ​​ruessi dinosaur as found (B). The white bones were visible on the surface. (Source: Sertich and Loewen, 2010)

The targeted search for fossils in a paleontological excavation is preceded by the geological mapping of the (presumably) fossil-bearing sedimentary rocks. The aim is to find new find points to clarify the situation of the already known horizons Fund to adjacent layers and rock units and the depositional environment sedimentological further characterize, were formed as whether sediments in a lake or a sea. Such an overview map is not necessary if the age, the stratigraphic classification and the lithology of the fossil-bearing rocks are already sufficiently known.

A systematic paleontological excavation is carried out layer by layer from the hanging wall , that is, starting with the youngest layer on top, to the lying , that is, in the direction of the older layers below. Accompanying the search for fossils, the geology of the stripped layers must be precisely described . The horizons are numbered consecutively. The numbering is transferred to the fossil finds so that they can be precisely assigned to the horizons.

If larger remains of organisms (such as dinosaur skeletons) are the target of the excavation, the position of individual bones and skeletal parts within a layer must be precisely documented with the aid of a grid laid over it. This is important to e.g. B. to reconstruct dying attitudes or deposition and transport processes and to distinguish bones of different individuals.

For the extraction of microfossils, rock samples are taken from the individual horizons and later processed in the laboratory. 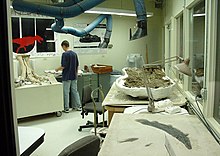 Dissection laboratory at the Field Museum of Natural History in Chicago, USA

Crumbly fossil remains are glued on site or fixed with alcohol-soluble chemicals for later preparation . Plaster of paris may also be required to protect bone finds . If fossils are spread over several rock slabs, they are often stuck together again at the break point.

The later preparation of the fossils in the laboratory is mostly done mechanically, i.e. with a scalpel and dissecting needles (compressed air chisel / airtool) under a magnifying glass or using a stereomicroscope . With the help of X-rays , fossil parts hidden by the rock can be localized. Damage during preparation is avoided in this way.

Often microfossils can be removed from the rock with the help of acid etching or other wet chemical processes (see micropalaeontology ).

For the further analysis of the fossils it is important to use different methods, i. H. graphically, photographically and, if necessary, to make filigree structures visible with a scanning electron microscope .

The photographic and / or graphic documentation forms the basis for the description and interpretation of a fossil find and its systematic classification . A new taxon can also be named within this framework .

From the fossil drawing, the original skeletal context (in animals) or organ context (e.g. in plants) can be reconstructed, taking into account known specimens and / or representatives of related groups. A reconstruction of the life picture can then take place. Interpretations of the function, way of life and mode of locomotion of fossil living beings are incorporated. If necessary, the death process of the animal is also reconstructed.

Palecological evaluation of the terrain data

Since the fossil contents of all layers of the find are precisely documented , an analysis of the fauna and flora composition and then a reconstruction of the food web can take place in the event that the respective organism remains were not transported from different places of origin, but come from the same ecosystem . The sedimentological description provides additional information on the transport and deposition processes that led to the formation of the fossil-bearing rock.

Conversely, fossils provide geologists with information on the nature of the sedimentation space, for example if the predominant fossil groups only under very specific environmental conditions (e.g. on the sea floor in clear water at temperatures between 18 and 20 ° C and a salinity of <2.5%) occurred.

The vertical sequence of horizons corresponds to a temporal one: By comparing the communities of different horizons, conclusions can be drawn about the development history of a prehistoric ecosystem.

If the samples are large enough, that is, enough individuals of a species have been found and documented in a horizon, they can be examined as an equivalent to a natural population with regard to the variability of body characteristics. The composition of the ecosystem can also be recorded quantitatively (e.g. predator-prey ratios).

The chemistry of water bodies can influence the composition of skeletons and housings. Often times of the year and time of day fluctuations in the chemical and isotope composition can be recorded in accretionary growing hard parts . Some of these can be interpreted climatically (see also paleoclimatology ).

The chemical composition of skeletons can e.g. B. clarify with the help of microprobe analyzes . The analysis of the isotopic composition requires mass spectroscopic methods.

The microscopic analysis of thin sections made of bones or housings provides information on the growth and earlier tissue properties of the respective hard parts. They sometimes contain important clues about the physiology and ontogeny of the hard part creator.

If the skeletons are fully preserved, the movements of fossil animals can be simulated in the form of computer models. In this way, it is possible to rule out certain behavior and lifestyles or to accept them as likely.

Relationships and family trees of fossil groups of organisms are now mainly determined using computer-aided cladistics methods . Combinations of characteristics of the fossil species to be examined are compared with one another and family trees are calculated in the form of branching schemes ( cladograms ) based on the principle of economy. Accordingly, the results of these analyzes represent the presumed course of evolution under the assumption of as few evolutionary steps as possible.

All fossil species that a site produces occur in a certain relatively narrow geological period. If these species are also known from other localities, a possible common formation period of the different find layers follows.

The comparison of several sedimentary rock sequences containing certain fossils and volcanic rocks (such as tuffs ) that can be dated by geochronological methods enables the assignment of more accurate ages (i.e. those with lower margins of error).

The biostratigraphic subdivision of predominantly terrestrial sediments of the Cenozoic era in Europe with the help of land mammal remains is particularly well developed .