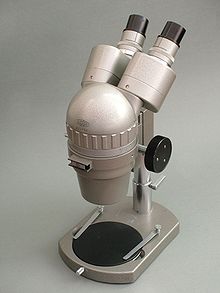 A stereo microscope is a special light microscope in which a separate beam path is provided for both eyes . Both eyes therefore see the specimen from a slightly different angle, so that a “stereo effect”, i.e. a spatial impression, occurs.

Stereo microscopes usually work with magnifications below 100: 1 because, due to the rapidly decreasing depth of field at high magnifications, a three-dimensional image is only useful at these comparatively low magnifications.

In laboratory jargon, the stereo microscope is often incorrectly referred to as binocular , and sometimes stereo magnifying glass . In contrast to a magnifying glass , however, a stereomicroscope has a two-stage magnification through the lens and eyepiece.

The stereomicroscope should not be confused with the binocular microscope, i.e. an ordinary light microscope with two ocular views. Here a single image of the specimen is made available to both eyes by a beam splitter in front of the eyepiece for easier observation. Additional image information (3D impression) is therefore not obtained, but only enables less fatigue to work. 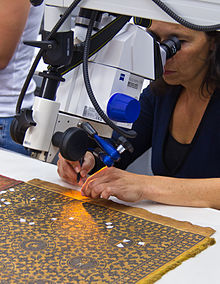 Stereo microscope in use for the restoration of the three-crown banner made of silk: In the Cologne city banner from the 15th century, loosened textile fibers are strengthened and the application of paint is preserved.

Stereo microscopes are used in many areas of teaching, research and technology, but also for leisure activities:

It is used in many areas in biology , medicine and dental technology . It is used for preparative work and can u. a. can also be used on ultramicrotomes . The Nobel Prize in Biology for the developmental physiological work of Hans Spemann was only made possible by the stereo microscope. In medicine, the stereomicroscope is used in a slightly modified form as a colposcope , in gynecology , and as a slit lamp microscope in ophthalmology . The typical surgical microscopes used in surgery have been modified somewhat more by a second observation device that is usually present and a larger free working distance at the expense of the now less pronounced stereo effect.

Areas of application are also geology , palaeontology , mineralogy , as well as material investigations as well as manufacturing of various kinds. In geology, due to the large, manageable object field, stereo microscopes are often used instead of conventional microscopes for the investigation of large-scale thin sections of rock. Stereo microscopes are used for production and quality control in the precision mechanical and electronic industries, where they are also attached to machines to monitor production processes. It is also important in criminology for securing evidence, as well as for restoration work in archeology and art. 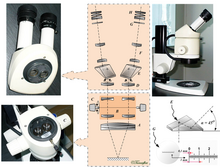 Beam path in the stereo microscope

In contrast to a binocular microscope, a stereomicroscope has two completely separate beam paths through which the object is viewed from two directions that are 11 ° to 16 ° to each other. This enables a spatial impression. This stereo angle corresponds to the convergence angle of both eyes with near accommodation (in the “clear viewing distance ” at 25 cm). Sometimes a double iris diaphragm is switched on in the tube beam path or, in the case of devices of the telescope type, it can also be inserted into the infinite beam path with its own intermediate tube. It serves to increase the depth of field (= axial resolution), especially in microphotography, but stopping down is at the expense of the (lateral) resolution. However, if the photos are stacked - as is often the case nowadays - using an appropriate image processing program , then the double iris diaphragm is superfluous.

Two construction principles are used in the stereo microscope. The older type is the Greenough microscope, which was first manufactured by Carl Zeiss in Jena in 1892 at the suggestion of the American zoologist Horatio S. Greenough . With this type, both beam paths are structurally completely separated from one another. The stereo angle is generated by two lenses in a common mount, the optical axes of which are inclined to each other by about 14 °. The advantages of this type of device are a lower price and better image quality. The disadvantage is the more difficult attachment of additional devices for coaxial lighting, microphotography and drawing tubes. This is why the Greenough microscope has meanwhile been largely replaced by the second, subsequent type, but has recently been increasingly manufactured again. The modern Greenough microscopes often already have a permanently installed interface for attaching a camera. Microscopic drawing is possible with the help of a drawing eyepiece (instead of the intermediate tubes of telescope-type stereomicroscopes).

The second type of construction is the telescope type, which goes back to Ernst Abbe . It was first realized with the stereomicroscope SM XX "Citoplast" from Carl Zeiss Jena , which was developed in Jena in 1936, but could not go into series production until 1946 after the rebuilding of the plant after the war. The telescope or Abbe type does not have a double lens; instead, there is a common main lens with a large diameter. The stereo angle is generated here by using diaphragms behind the main lens to only use the marginal rays that penetrate the lens at an angle of 11 ° to create the image. The intermediate image is at an infinite distance. An additional tube lens is therefore required in front of the eyepiece. The advantages of this construction principle are:

(It is a Galilean or Dutch telescope consisting of a collecting and a dispersing element. In the meantime, however, pancratic "zoom" systems have found widespread use in both the Greenough and the stereomicroscopes that work according to the telescope system . They are preferred for the Live observation of small animals suitable, which should not get out of the field of view when changing the magnification. For other applications the systems with fixed magnification levels are usually completely sufficient, since the graduation of the magnification changer is fine enough.)

The disadvantages of the telescope principle, on the other hand, are:

However, individual manufacturers (Zeiss Göttingen) also offered special double lenses for stereomicroscopes of the telescope type, which could be attached in place of the common main lens. This made it possible to use the advantages of the Greenough type in terms of image quality on telescope type devices.

Another possibility to increase the image quality for at least microphotography offers a shift of the main objective to the side of the photo beam path until the optical axis of the main objective coincides with that of the photo beam path. As a result, the rays near the optical axis are used for the image generation , as in a macroscope (see below) or in the Greenough microscope, and the imaging errors are thus minimized. This is achieved by a movable mount that is inserted between the main objective and the microscope body in a parallel infinite beam path (for example Wild / Leica, Askania).

An interesting special model was the “Microscope Base Stereo” from Zeiss Oberkochen . It is a small stereo microscope stand with an optics carrier that contains a main objective and a prism system for spatial separation of the beam paths. It is completed by attached pocket binoculars. Together this results in a small, lightweight stereo microscope with constant magnification (12, 16 or 20 times depending on the binoculars used) for travel and biological and paleontological field work.

With stereomicroscopy, the objects are usually illuminated from above, but transmitted light illumination is often built into the stand base or available as an additional device, e.g. for examining biological objects. With more modern transmitted light devices, dark field lighting is also possible. It is then also possible to work with mixed light from above and below. Depressions in objects (such as holes in workpieces to be examined) can be illuminated by means of coaxial lighting in telescope-type microscopes. For shadow-free illumination, ring lights are available that are clamped to the main lens.

A UV light source is often used for developmental physiological studies. Optionally, one or more remote cold light lamps (spotlights) can be used.

For the investigation of large-scale thin sections of rock in geology, there are attachable polarization turntables with an analyzer and insertable auxiliary objects (lambda plates). The analyzer is clamped down in front of the front lens of the objective.

Many different interchangeable tripod types are available for preparative work in biology, for example cantilever tripods for examining larger objects.