This article describes the specialty of the gynecologist (gynecologist). For the specialist journal see Der Gynäkologe , for the rapper see Frauenarzt (rapper) .

The gynecology (from ancient Greek γυνή Gyné , Gen. γυναικός gynaikós , "woman" and -logie , "teaching, science") or gynecology , the doctrine of creation, detection, treatment and prevention of the disease is primarily of female sexual and reproductive tract.

In a narrower sense, gynecology deals with the diseases of non-pregnant women in contrast to its sub-area, obstetrics (obstetrics). Gynecology (in its broader aspects as Women's Health hereinafter) is one of about 30 sub-areas of human medicine . In Germany, specialist training is always carried out together with obstetrics.

The tasks of gynecology also include the treatment of diseases of the female breast and the corresponding preventive examinations (preventive medicine; see also mammography ). 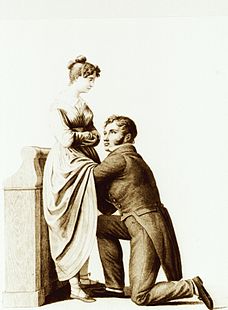 The most important examination methods in gynecology are ultrasound (see sonography ) to map the internal organs (especially the uterus ), as well as palpation ( ovaries ) and visual assessment using a speculum to examine the vagina and cervix , taking tissue samples and cells from the surface of the mucous membrane ( smear ) can be removed for examination.

For examinations and treatments in the area of ​​the abdomen, the patient is usually placed on a gynecological chair so that the genital organs are easily accessible. Incidentally, microscopy should be mentioned as an important tool: For example, to detect a fungal infection of the vagina (candidamycosis).

Gynecology is one of the operative specialties of medicine. Some classic interventions: hysterectomy (removal of the uterus), tubal ligation (tying the fallopian tubes for sterilization), laparoscopic ovarian cystectomy (removal of ovarian cysts by means of keyhole surgery through the abdominal wall). However, gynecology also encompasses a wide range of conservative treatment methods, such as hormone therapy, counseling and implementation of measures for contraception and the treatment of couples who have involuntary childlessness .

Specialist in Obstetrics and Gynecology

In order to work as a specialist in gynecology and obstetrics after completing a medical degree in Germany , a five-year further training course is required, of which at least three years have to be completed in ward duty. The following can be counted towards this training period:

There are trends within the specialist field of gynecology that want to define these additional qualifications as their own focus in gynecology. However, opponents fear the risk of a possible fragmentation of the gynecology. This would also make further training in gynecology more difficult, since not all clinics can provide the entire spectrum.