Surgeon is a redirect to this article. For the medical journal, see Der Chirurg .

The surgery (via Latin chirurgia of ancient Greek χειρουργία cheirurgía "Working by hand, crafted, craft, hand effect") is the branch of medicine that deals with the surgical treatment employed by illness and injury. A person performing surgery or parts of it is called a surgeon (from the Greek cheir-ourgos "craftsman"). 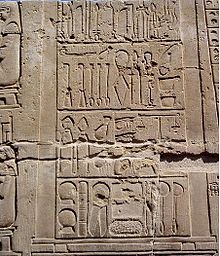 Surgical interventions that were survived by the patients have been documented as early as the Stone Age . This art was not limited to Homo sapiens : a 50,000-year-old skeleton find of a male Neanderthal in a cave in Iraq proves an arm amputation . Survived trepanations have been documented for 12,000 years .

In ancient times , especially among the Egyptians , Greeks and Romans , operations were carried out with special (mostly metallic) tools. Little is known about the successes and healings. The tasks of surgery have always included hemostasis in the event of injuries and the treatment of broken bones as well as festering wounds and chronic ulcers . Conservative surgical therapy methods have also been known since ancient times. In about 1550 BC Chr. Arising Edwin Smith Papyrus(a copy of an older text) describes the reduction and subsequent immobilization of mandibular fractures with splints and bandages. Ancient evidence of writings with surgical content includes those dating from the 5th century BC. Texts originating in BC about the straightening of the joints and about the broken bones in the corpus Hippocraticum . The first specialist writer on surgical surgery known by name is considered to be in the 1st or 2nd century BC. (Klaudios) Philoxenus who worked in Egypt. He is referred to in the writings of Galenus as chirurgos and Aulus Cornelius Celsussaw in him one of the most important surgical specialist authors. According to Celsus, surgery with dietetics (regulation of lifestyle) and pharmacotherapy was one of the three parts of (ancient) medicine. The pneumatic doctor Antyllos , who worked around the middle of the 2nd century, is one of the other pioneers of surgical texts .

From the Middle Ages to the early modern period, surgery was also referred to as " wound medicine ", while today it is used to name older surgical works (especially wound medicine handbooks ) (since the 10th century - with Richer von Reims - the chirurgicus or chirurgus distinguished from medicus ). The Council of Tours in 1163 forbade the academically trained, often also clergymen, who held surgical interventions, which were regarded as risky, and which were therefore reserved for surgeons. An important representative of oriental surgery in the 9th / 10th centuries. Century was Abulcasis. The surgeon Guy de Chauliac formulated in the 14th century: "Surgery dissolves what is connected, connects what is separate and removes what is superfluous". For example, sponges soaked with opium were held in front of the patient's mouth and nose to relieve pain.

Until the advent of academic surgery, the bathing surgeon or surgeon with technical training (the craft surgeon ) performed operations. The surgeons working in the military were called field scissors . Modern surgery was promoted by military doctors, surgeons like Felix Würtz and Italian anatomists like Hieronymus Fabricius (1537-1619). From around the 16th century, autopsies expanded the knowledge of anatomy and the surgical horizons very significantly (autopsies were also carried out by some ancient Greek doctors and occasionally in the Middle AgesHave been carried out). Andreas Vesalius (1514–1564) is considered the founder of modern anatomy .

Due to a lack of knowledge about the risk of infection , the doctor's instruments and hands were often not cleaned. The smocks were dark back then, so that dirt and blood were harder to see on them and the smocks didn't have to be washed as often. The consequences of such unhygienic procedures were wound infections , sepsis and death.

Ignaz Semmelweis suspected the cause of puerperal fever in the middle of the 19th century , ordered strict hygiene measures for the first time from 1847 and made an important first contribution to the decrease in deaths. Joseph Lister experimented with carbolic acid , had hands and instruments cleaned with it, sprayed it over the surgical field and, from around 1865, created a sterile atmosphere during the procedure. The breakthrough in surgery came with the discovery of pathogenic germs through the microscope , the findings of Louis Pasteur and Robert Koch and the subsequent development of asepsis. The triumphant advance to today's standard was founded on the cleaning, disinfection and sterilization of medical tools and materials as well as the introduction of sterile surgical gloves made of rubber.

The efficiency of today's surgery is inconceivable without the emancipation of anesthesiology . Before the introduction of sulfur ether anesthesia , the surgeon had to work extremely quickly because of the severe pain of the patient; deaths from pain ( shock ), along with those from infections and bleeding, were not uncommon. By Dominique Jean Larrey (1766-1842), the personal physician of Napoleon Bonaparte , is reported to have more than 200 amputations could make in a day. Amputations were often mutilating back thenMeasures, because wound closure was generally not done. With careful stump formation and soft tissue covering, amputations today sometimes take more than an hour.

On October 16, 1846, the ethereal anesthesia was used by William Thomas Green Morton during an operation at the Massachusetts General Hospital in Boston . The "Ethereal Day of Boston" is now considered to be the birth of modern anesthesia and thus one of the prerequisites for modern surgery. On December 21, 1846, Robert Liston was the first doctor in Europe to use the new anesthetic method for a leg amputation in London. In 1847, James Young Simpson introduced chloroform for surgical and obstetric anesthesia. Out of habit, however, he operated very quickly and amputated the leg in 28 seconds. The surgeonAugust Bier and his assistant successfully used spinal anesthesia for the first time in 1898 (published in 1899).

Findings in anatomy, pathological anatomy and experimental physiology opened up new ways for surgeons to treat wounds in the 19th century. 1858 sparked cellular pathology of Rudolf Virchow the previously applied principles of humoral pathology from what is internal medicine, but also the surgical therapies impact not only on. Arterial bleeding was successfully stopped. More and more surgeons avoided interventions in the tissue structure and premature amputations. With his work on the healing of extremity injuries without amputation, the Swiss war surgeon and Prussian personal physician Johann Ulrich von Bilguer becamefrom 1761 known throughout Europe as a pioneer of conservative surgery. In wound care, the conservative = conservative approach began to dominate. The Scottish surgeon William Fergusson (1808–1877) introduced the term “conservative surgery” into technical language.

After the battle of Waterloo , the Göttingen surgeon and anatomist Konrad Johann Martin Langenbeck treated many gunshot wounded in the hospital in Antwerp. Since then, he has advised each surgical intervention to be carefully considered as an intervention in the complex organism. The German founders of conservative surgery include his students Friedrich von Esmarch , Louis Stromeyer , Nikolai Iwanowitsch Pirogow and Bernhard von Langenbeck (a nephew of Konrad Johann Martin Langenbeck). In France, Lucien Baudens (1804–1857) was her pioneer.

Before the Franco-Prussian War (1870–1871), all surgeons who went to hospitals had thoroughly familiarized themselves with the basic principles of conservative treatment of gunshot wounds. Signposts were:

During the war, 18.8% of the wounded (17,000) were able to return to their unit as healed and fit for service. Thanks to the advancement of medicine and its implementation by the military doctors, the hospital began to become an important source of personnel replacement. Information about the activities of German surgeons during the Franco-Prussian War can be found in the surgical section of the five-volume report published by the Prussian War Ministry's medical department soon after the war. The editor was Richard von Volkmann , who himself had propagated and developed conservative wound treatment.

Operations on the heart

Advances in the fields of anesthesia and asepsis made it possible to make more and more organs of the human body accessible for surgical interventions by the turn of the 20th century. For a long time, however, the central organ of the blood circulation, the heart, was a major exception. Ludwig Rehn's first successful suturing of a heart wound in 1896 is considered a milestone in early cardiac surgery .

But for the time being more than such external interventions could not be dared. Cutting the wall of the heart in order to operate inside the heart seemed unthinkable in the early 20th century and was still impractical decades later. Although it could be done by hand, the main problem with intracardiac operations was simply a lack of operating time. In order to create a clear field of vision and avoid massive blood loss, the heart had to be clamped for the duration of an operation, i.e. H. be removed from the bloodstream, resulting in deadly oxygen starvation in the brain within minutes. In the first half of the 20th century, numerous, very different experiments were therefore devoted to extending this operating time.Achieve hypothermia and especially the heart-lung machine . These methods, later also used in combination, made it possible for the first time to operate inside the bloodless heart with a calculable risk and thus put the field of cardiac surgery on a stable foundation.

Introduced in gynecology by Kurt Semm in 1967 , minimally invasive surgery established itself in the 1990s . The patients are operated on with endoscopes that are inserted through stab incisions. The surgeon sees the field of work on the screen and operates the instruments indirectly. The epochal development of endoscopic surgery, described by the surgeon Ernst Kern in 1993 as the “second turning point in surgery”, was initiated by Johann von Mikulicz (1850–1905) in Vienna . It was only introduced by Olympus in Japan in the second half of the 20th centurywhere the hard-to-detect gastric cancer was more common than anywhere else in the world.

According to the (model) further training regulations of 2008, surgery in Germany comprises the following specialties :

Other operational subjects are gynecology , ophthalmology , ear, nose and throat medicine , dermatology , oral and maxillofacial surgery , neurosurgery and urology . Since every country has its own training regulations, this classification is not generally applicable.

In the 19th century, German surgery gained worldwide recognition through Johann von Mikulicz . The first German surgeon association was founded by Friedrich Ernst Baumgarten (1810–1869). Helmut Wolff reports on the difficult situation of surgery in the German Democratic Republic . Some well-known surgeons from German-speaking countries are: 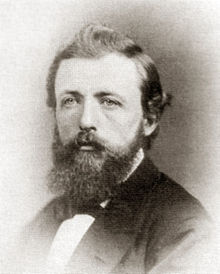 We owe the most important surgeon biographies of the 20th century to Nissen and Wachsmuth. In 1952, Peter Bamm published his famous report on war surgery in the army of the Wehrmacht . That his veracity also included German war crimes is only being noticed today.

In Germany, Der Chirurg is the most important publication organ for surgery. Founded in 1860 and anglicised in 1998, Langenbeck's archive for surgery was recognized worldwide. The Zentralblatt für Chirurgie is the newsletter of eight surgeons' associations. The surgical general is widespread .

Wikisource: The Evolution of Surgery (1914)  - Sources and full texts

Surgery Ordinaries at the Albertus University

Surgery Ordinaries of the University of Wroclaw

Surgery Ordinaries at the University of Göttingen

Surgery Ordinaries at the University of Greifswald

Surgery Ordinaries at the University of Leipzig