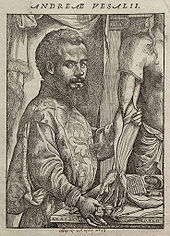 Andreas Vesal or Latin Andreas Vesalius (Latinized from Flemish Andries van Wezel , actually Andreas Witinck or Andries Witting van Wesel ; * December 31, 1514 in Brussels , † October 15, 1564 in Zakynthos / Greece ) was a Belgian or Flemish anatomist and Renaissance surgeon . He is regarded as the founder of modern anatomy and morphological thinking in medicine. He was the personal physician of Emperor Charles V and King Philip II of Spain.

Vesalius came from an old Wesel family (the name Vesal still reminds of it), but they emigrated early. The father was a Habsburg personal pharmacist at the imperial court of Charles V in Flanders.

Vesalius attended school in Brussels, studied ancient languages ​​and sciences at the University of Leuven from 1530 and received his humanistic education there. In 1531 he switched to medicine. Vesalius went to Paris in 1533 to study galenic medicine and anatomy with Miguel Serveto under Jacques Dubois (Jacobus Sylvius) and Johann Winter von Andernach . However, he was disappointed by Sylvius' strictly following Galen (Galen) and the unrealistic training at the university and left Paris in 1536 because of the Third War of Charles V against Francis I. again.

Vesalius returned to Leuven and finished his studies there. Because he wanted to ascertain for himself the anatomical details that he had heard about the teachings of Galen at the university , he obtained the corpse of someone who had been executed there and prepared the skeleton . He found deviations from the information provided by Galen. Thanks to good relations with the authorities, Vesalius was able to carry out his first public opening of the bodies (section) in Leuven in 1537 .

At the beginning of 1537 Vesalius published his first philosophical work in Brussels as a candidate for medicine (a degree comparable to a master’s degree), the Paraphrasis ad nonum librum Rhazae , a study of the theories and methods of the Persian doctor Rhazes (Abu Bakr Muhammad ibn Zakariya ar-Razi) who lived from about 860 to 925.

Then he went to Northern Italy. On December 3, 1537 he received his doctorate ; the following day he was appointed professor of surgery and anatomy in Padua . So he taught in Padua for the next few years.

He later went to Venice, where he had been to visit in 1537 and operated on pleurisy patients in an excellent manner . In recognition of his outstanding knowledge of Vesalius received from the Venetian Senate a five-year term contract as a professor of surgery, with teaching duties in anatomy. In the large Venetian city hospital he was not only able to “deepen his anatomical and medical knowledge, but also receive significant suggestions from the painting school of Titian [...] with regard to his artistic inclinations .” During his stay in Venice he met the painter, who also came from the Lower Rhine region and woodcutter Jan Stephan van Calcar , who had a great influence on the artistic design of his scientific works.

Around 1542 Vesalius carried out ventilation through a tube inserted into the windpipe, a tube. This first documented endotracheal intubation , published in 1543 , only took place in animal experiments and received no further attention.

Vesal published six anatomical leaflets for students, the Tabulae anatomicae sex , in Venice in 1538. At least here it is certain that Jan Stephan van Calcar made the corresponding skeleton drawings. A month later, Vesalius published a new edition of the Institutiones anatomicae by Johann Winter without his knowledge. It was intended as a compendium for students. Vesalius Aderlassbrief appeared in 1539, he wrote three further treatises on a large Galen edition in 1541.

A German medical student was also invited to attend the section. Balthasar Heseler (1508 / 1509–1567), who came from Liegnitz , later reported that Vesalius had performed the section in front of around 200 spectators, including 150 students. At first he distanced himself from the old procedure, whose representatives Galen and Mondino he named, and - instead of immediately opening up the chest , abdomen and skull - began with myology (muscle theory), which was completely neglected up to Leonardo da Vinci and all the details of myology and osteology (bone theory) are set out. During the demonstration by Vesalius, Jacobus Erigius , a member of the Medical Faculty of Bologna, also dissected a corpse and was ridiculed by the former for his improper handling. 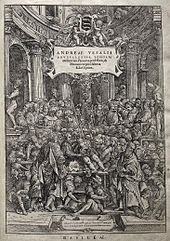 In the years 1538 to 1542 Vesalius prepared the great work (German: Seven books on the structure of the human body ), which founded modern anatomy. The consistency, concentration and the manic zeal to complete the Fabrica made him appear silent and melancholic ( taciturnus et melancholicus ) among his fellow men .

While Vesal was professor and prosector, in 1539 he dissected the bodies of all those executed in Padua. In 1540 anatomical demonstrations followed in Bologna.

In the preface to the Fabrica he vehemently criticized Galen, who himself had never made a secret of having only dissected animal carcasses. This carefully typographically designed textbook shows around 200 partly full-page illustrations. In this, Vesal took the view, contrary to the general belief, that the human body alone is the reliable way to know the human body structure. In addition, he drew a line of descent from the ape to the pygmies to humans , referring to Pliny .

De humani corporis fabrica libri septem (together with its extract for surgeons) was first published in Basel in 1543 by the publisher Johannes Oporinus . Vesalius had the wooden sticks for his illustrations, completely cut, brought to Basel along with the proofs. He himself followed in 1543 and held an anatomical colloquium in Basel in May . The so-called Vesal skeleton prepared by Vesalius is still preserved today and is the oldest piece in the anatomical collection in Basel . It is said to have been prepared from the remains of the criminal Jakob Karrer von Gebweiler in 1543 .

With his revolutionary work and breaking away from Galen's teachings, Vesal was the main founder of modern anatomy. Vesal was the first to describe the ligaments of the joints and the articular cartilage of the temporomandibular joint and was the first to identify the pulp cavity . His students continued this experiential anatomy.

In 1544 Vesalius traveled to Pisa after Charles V had signed up as personal physician and held a public dissection there. He was also offered a teaching post at the University of Pisa , but the Emperor Charles V refused to accept the position. Vesalius moved to Brussels and continued to work as a writer. He published a treatise on the China root in 1546 and married that same year. When Emperor Charles V withdrew from Spain in 1556, he wanted to leave Vesalius there with an annuity . A year earlier, in 1555, the second edition of Fabrica had appeared, which had become a masterpiece of European book art with an even more beautiful typography based on the design of the French typesetter Claude Garamond (books 1–5 came on the market as early as 1552). Vesal had incorporated countless minor changes into this edition. It also contained answers to attacks against him, and it was characterized by a freer attitude towards Galen.

Vesal's scientific interest did not die out, but he entered the service of Philip II of Spain, whose court was moved to Madrid in 1559. Vesal was now a doctor of the Dutch court . Finally, in 1564, he made a pilgrimage to the Holy Land , from which he never returned: on the return journey from Jerusalem he fell ill and had to go ashore. He died in Zante . He is said to have been buried by pilgrims.

Legends about this early death brought Vesalius into connection with the Inquisition . One year after his death became known, Hubertus Languetus wrote to the doctor Caspar Peucer that Vesalius had accidentally dissected a person alive and had been punished to travel to Jerusalem.