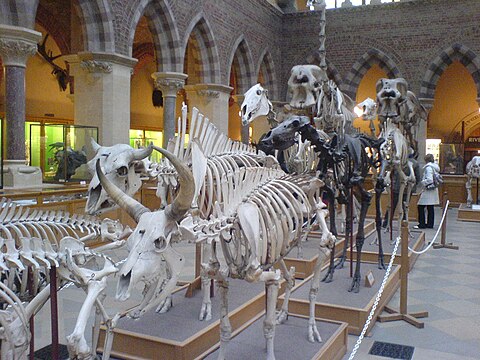 Mounted skeletons as part of the osteological collection of the Oxford Museum of Natural History, Oxford, UK. (2007)

The Osteologie (from the Greek osteon = bone, logos = teaching ; bone teaching ) is the study of the structure and the diseases of the bones or of the skeletal system . Osteology is also concerned with bone formation and the comparison of skeletal systems. It is a sub-area of anthropology , zoology , archeology , paleontology and medicine or anatomy .

Osteology is an interdisciplinary subject. Scientists, doctors, engineers and representatives from other specialist areas are involved in research into healthy and pathologically altered bone tissue.

Areas of application in osteology are the reconstruction of organisms, identification and systematics based on certain characteristics of bones as well as research into diseases of the skeletal system: