In 1514 the Saxon feud between Duke Georg von Sachsen and the East Frisian Count Edzard I begins , whose fighting takes place mainly in East Frisia , and in Württemberg the uprising of " Poor Konrad " breaks out, which was defeated by Duke Ulrich's troops in the same year is bloodily knocked down.

Poland-Lithuania loses the city of Smolensk to the Grand Duchy of Moscow , but with the victory in the Battle of Orsha can temporarily halt Russian expansion to the west.

The predominantly on East Frisian occurring soil Saxon feud between Duke George of Saxony and because of his support of the rebellious city of Groningen with outlawed occupied East Frisian Count Edzard I. begins:

Johann V von Oldenburg , who wants to give his county access to the North Sea at Edzard's expense, attacks the Butjadinger Frisians and defeats them in the battle of Langwarden . At the same time, the Brunswick Duke Heinrich I invaded East Frisia with an army of 20,000 men and besieged the Leerort fortress, which was only defended by a few farmers and soldiers . However, he was killed there on June 23 by an aimed cannon shot. The troops, which have become leaderless as a result, withdraw from East Frisia. Heinrich's son Heinrich II. Succeeds Duke of Braunschweig-Lüneburg and Prince of Braunschweig-Wolfenbüttel . He is the last Catholic prince in the Lower Saxony area.

With the support of the East Frisian chief Hero Omken, the Count of Oldenburg is now taking several castles in East Frisia. The fortress Stickhausen goes so lost. Edzard has to withdraw and has the Meerhusen monastery set on fire to cover his retreat . Aurich is besieged and destroyed as a result of the fighting and arson. On another front, land servants of the Black Guard plunder and destroy several soldiers and castles. Altgödens Castle was destroyed and Kniphausen Castle was taken. In June, the north was sacked and the Black Guard turned to Oldersum , where a first battle took place on June 14th . Under the leadership of Ulrich von Dornum and Hicko von Oldersum , however, the village was defended. A second attempt to take the village failed on August 16 .

The uprising of the "poor Konrad" in Württemberg

In protest against the consumption taxes introduced by Duke Ulrich von Württemberg in the previous year and especially against the reduction of the weights required for trade , Peter Gaiß from Beutelsbach leads a divine judgment on May 2nd , in which the Duke's new weights sink into the Rems near Großheppach . When the authorities asked for the stones to be returned the next day, he escalated the situation by ringing the storm bell in the chapel and explaining to the gathering peasants that he was poor Konrad , at that time probably also a synonym for the common man, and moved with a growing crowd of rebels in front of Schorndorf , where they impress Duke Ulrich so much that he lifts the unpopular tax. As a result, the situation in the Rems valley calmed down temporarily.

Title page of the Gaißer dossier by Philipp Volland

But already on May 7th, the pastor of Grüningen, Reinhard Gaisser, openly called for an uprising against Vogt Philipp Volland , whom he accused of abuse of office and grain speculation at the expense of the farmers. Volland, who is besieged in his house by the rebels, makes some minor concessions and plays for time while he passes several situation reports to Duke Ulrich. Peter Gaiß is also moving through the country again and trying to get people to riot. After various tumults across the country, Duke Ulrich in Schorndorf himself barely escaped the rebels in July, who remained in their hands for ten days. Duke Ulrich then convenes an extraordinary state parliament and relocates it to Tübingen in order to prevent the common people from having a say.

Original document of the Tübingen contract

On July 8th, the Treaty of Tübingen is signed between Duke Ulrich and his estates . In return for assuming the ducal debts, the latter are given a say in tax collection and national defense. In return, the honesty assures their support in suppressing the uprising of poor Konrad. Reinhard Gaisser continues to call for an uprising from the pulpit and rail against the “lazy compromise”, but he underestimates the new room for maneuver that the Duke has been given with the treaty, which now recruits a mercenary army and thus opposes the rebels can.

Memorial plaque for those executed in Schorndorf

The peasants finally set off on a march through Württemberg in the hope of being able to persuade others to move in and thus strengthen themselves further. They move to their camp on the Beutelsbacher Kappelberg, where the crowd is getting smaller and smaller instead of larger in view of the news of well-armed ducal troops. Finally poor Konrad collapses without a fight, without a sound. Ducal troops occupy the Rems Valley without resistance and drag the rioters, whom they can get hold of, to Schorndorf, where they are beheaded on August 9th . Around 1,700 farmers from the Rems Valley are tortured, whipped and branded and sentenced to heavy fines and the loss of their rights of honor.

Pastor Gaißer, who does not fall under the Württemberg criminal jurisdiction, gets away with a warning from the Bishop of Speyer, Georg von der Pfalz , who is well aware of his cause , and continues to be pastor in the Bartholomäuskirche in Grüningen.

Albrecht von Brandenburg succeeds Uriel von Gemmingen , who died on February 9, as Archbishop and Elector of Mainz . Since the 24-year-old has been Archbishop of Magdeburg and administrator of the Halberstadt diocese for a year at this point in time , he is violating the canonical ban on holding more than one bishopric . He rules from Moritzburg in Halle an der Saale during his entire term of office . 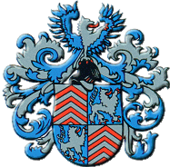 Mary and Ludwig by an unknown artist 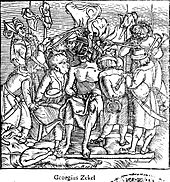 Contemporary depiction of the Muscovite-Lithuanian War

Sultan Selim I of the Ottoman Empire strikes on August 23 the Persian Safavid Rulers Ismail I. Shah in the battle of chaldiran devastating thus winning the rule in eastern Anatolia . Immediately after the battle, Sultan Selim advances and conquers the Safavid capital Tabriz . Numerous craftsmen are brought to Istanbul from here. Because of the approaching onset of winter, the campaign is finally canceled. The Safavids are moving their capital to Qazvin in the meantime . The borderline after the battle has remained almost unchanged to this day. The Safavids no longer pose a serious threat to the Ottomans for the next 100 years. With the victory of the Ottomans, the Kurdish feudal lords and local princes change sides and affirm their loyalty to the Ottomans. With the conquest of Eastern Anatolia, Sultan Selim I created a basis for the later conquest of Mameluke Egypt and also gained control over a section of the Silk Road .

The Spanish conquistador Vasco Núñez de Balboa will return to Darién on January 19th from his voyage of discovery that brought him to the “ Southern Sea ” . Only a few of his companions survived the expedition and Balboa is also close to death on his arrival. Due to intrigues, he was deposed as governor of Darién in the same year and replaced by the soldier Pedro Arias Dávila , which ruined his plans to conquer the fabulous gold country in the south , which he learned about on the trip. Dávila arrives in Darién on June 30th . Among others, the adventurer Diego de Almagro el Viejo , who met the soldier Francisco Pizarro during this time , and the 14-year-old Hernando de Soto are among his entourage .

The dynasty founder Manga from the Fula tribe founds the theocratic empire of Denanke (with a traditional religion ) in West Africa . He makes Tekrur the capital.

Upper half of the first page of the Viri Mathematici

Hanno; after a (lost) drawing by Raffael

King Manuel the Lucky of Portugal gives Pope Leo X , who was elected last year , an elephant from India as a gift, along with numerous other wild animals. The boat trip from Lisbon to the Italian coast is unproblematic, but the onward journey overland sometimes gets out of control due to the masses of onlookers. Hanno , who was successfully brought on March 19 by a large delegation led by Tristão da Cunha , became the Pope's favorite animal . 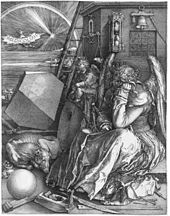 Saint Jerome in the case

Albrecht Dürer creates the two copperplate engravings Melencolia I and Saint Jerome in the case . Together with the work Knight, Death and the Devil from 1513, they form Dürer's “master engravings”, which are characterized by a complex iconography and symbolism. According to a common interpretation, the three master stitches represent three different ways of life.

The Landscheider with their tools, in the background the village of Kaichen

Anne de Bretagne, detail from a painting by Jean Bourdichon 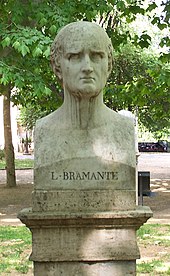