Coat of arms of the diocese of Merseburg 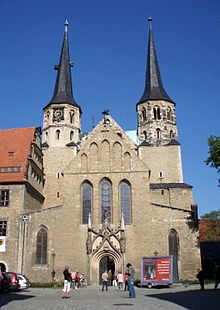 Merseburg Cathedral on the day the Chapter House reopened

The Merseburg bishopric around 1250

Courtyard of Merseburg Castle , residence of the diocese and bishopric, with entrance to Merseburg Cathedral (right)

The diocese came into being on the basis of a vow made by King Otto I after he had finally defeated the Hungarians in the Battle of Lechfeld . The Synod of Ravenna in 967 supported the establishment. With a royal diploma, Otto had the Archdiocese of Magdeburg and its suffragan dioceses Merseburg, Zeitz and Meißen built. The first bishop of Merseburg was Boso (968–970), the second Giselher (971–981). When this Archbishop of Magdeburg became, the diocese of Merseburg was abolished until his death in 1004. Emperor Heinrich II founded it again. A total of 43 bishops officiated in Merseburg.

In 1021 the Merseburg Cathedral , the foundation stone of which was laid by Bishop Thietmar in 1015, was consecrated by Bishop Bruno in the presence of King Heinrich II . On this occasion, the king gave the diocese rich gifts, not least because of its strategic importance for his Ostmark .

Until the Reformation , Merseburg remained a bishopric and an important religious center after the area had previously belonged to the Halberstadt diocese . In terms of area, it was one of the smallest German dioceses, but included important centers such as the city of Leipzig , the south of today's Saxony-Anhalt and parts of today's Free State of Saxony . At the end of the Middle Ages it comprised around 310 parish and subsidiary churches. In addition, the Bishop of Merseburg also provided the Chancellor of Leipzig University even after the Reformation. For this reason, the seal of the university, which is still in use today, shows the patron saints of the Merseburg diocese John the Baptist and St. Lawrence of Rome .

Bishop Thilo von Trotha had the construction of the Merseburg Palace begin in 1470 and, from 1510, initiated the conversion of the cathedral in the late Gothic style from a basilica to a hall church .

On May 3, 1525, Bishop Adolf had to flee to Leipzig due to Protestant unrest . On May 8th, the discontented tried to storm the cathedral freedom . The court hearings that followed in June resulted in four citizens and four peasants being beheaded on June 10, 1525 at the Merseburg market.

During the unsuccessful siege of the city of Leipzig in the Schmalkaldic War , the two warring sides shaped emergency or siege cliffs in Leipzig in January 1547 . The money needed to pay the mercenaries during the siege by Elector Johann Friedrich I had to be covered by minting emergency cliffs made of silver and gold, mainly using church utensils and silver dishes . The valuable items came from the possession of the Merseburg Monastery, which had been stored in Leipzig for security reasons before the war .

After the death of the last Catholic bishop in 1561, the Reformation finally took hold in Merseburg . Duke Alexander , son of Duke August von Sachsen, was (when he was a child) until his untimely death in 1565 formally the administrator of the territory, after which it came to Electoral Saxony . Later it was part of the short-lived duchy of Saxony-Merseburg .