This article deals with the former Roman Catholic diocese of Bremen. The same name is often used to denote the secular territory of the Bremen bishops, see Archbishopric and Duchy of Bremen . 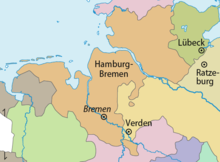 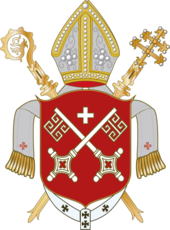 The Diocese of Bremen was a diocese of the Roman Catholic Church in Germany . The diocese of Bremen existed from 788 until the Reformation. It was a suffragan of the Archdiocese of Cologne , but then became a metropolitan seat itself . After the Thirty Years' War , the archbishopric's secular property, the “Archbishopric”, became the Duchy of Bremen , which included parts of the Elbe-Weser triangle .

Foundation of the diocese

Painting from 1532 in the Bremen Town Hall : Charlemagne and Bishop Willehad next to the Bremen Cathedral

During the Saxon Wars of Charlemagne , the missionary Willehad was installed as bishop for the area between the mouth of the Weser and Ems. In addition, there are two documents dealing with somewhat different formulations largely the same tailored Sprengel relate. On July 13, 787 he was consecrated in Worms as Bishop of Wigmodi , Laras, Riustri, Asterga, Nordendi and Wanga (on the lower Weser and between the mouth of the Weser and Ems). On July 14, 788, Charlemagne established the diocese of Bremen in Speyer for the northern part of Saxony and awarded this new diocese to Willehad on behalf of Pope Hadrian I and after the advice of Lullus , the archbishop of Mainz , and the bishops present. Bremen was thus the oldest diocese on Saxon soil. Willehad made Bremen his residence and consecrated the first Bremen cathedral in 789 in the name of the Apostle Peter .

This restriction later became obsolete, especially when Pope Leo IX. 1053 the archdiocese extended to the Arctic Ocean . In the end, however, there were only three suffragans left.

In 1224 Pope Honorius III confirmed . the double bishopric with seat in Bremen finally, whereby the cathedral chapter of Hamburg was to remain and to send the provost , the dean and the scholaster to Bremen for the election of bishops . The Bremen Cathedral was built from the 11th century on the foundations of previous buildings older than and since the 13th century in the style of Gothic rebuilt. In Hamburg, the old Mariendom was built as a cathedral church in the Gothic style in the 13th century after several previous buildings.

Area of ​​the archdiocese 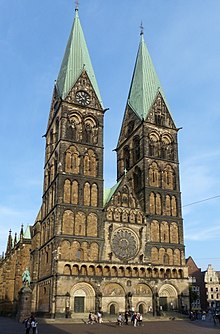 Since Bremen and Hamburg were centers of the Scandinavian mission, the archbishops temporarily gained control over the dioceses of the north. Archbishop Adalbert endeavored during his episcopate, 1043 to 1072, to obtain the title of patriarch . The attempt to become the patriarch of the north, however, failed. Instead, in 1104 the church province of Lund was spun off from the Bremen-Hamburg metropolis, which resulted in Bremen losing most of its suffragans. In the same century, the Archdiocese of Lund was divided: in 1158, the Archdiocese of Nidaros was created for Norway including the North Atlantic Islands. Sweden got its own archbishopric in 1164 , which took its seat in Uppsala in 1179 .

Soon after the loss of the suffragans in the north, the Archdiocese of Bremen was able to establish and supervise new dioceses east of the Baltic Sea before and during the expansion of the Order . Then in 1255 Pope Alexander IV established the Archdiocese of Riga and subordinated all dioceses in the area of ​​the Order State to it, including those not connected with Bremen.

The remaining German remainder of the Bremen archbishopric reached in the 12th to 16th centuries from East Friesland in the west and the county of Hoya in the south to the Eider in the north and to Mecklenburg and Rügen in the east. The dioceses of Münster , Osnabrück and Minden bordering to the south were under the Archdiocese of Cologne , the Diocese of Verden to the Archdiocese of Mainz .

Land area of ​​the archbishopric 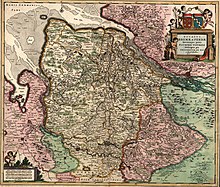 The Duchy of Bremen around 1655. The map reflects the Swedish legal concept.

The secular territory of the archbishops acquired over time is now mostly referred to as the archbishopric . The Dutch-Low German word “sticht” is used in medieval documents. It stands for the administration by the cathedral chapter . The actually more precise name of the prince-bishopric is unusual for Bremen. At the time of the (arch) episcopal rule one was imprecise with the conceptual distinction. The sovereignty was often referred to as "Archiepiscopatus" or "Dioecesis".

Over the centuries, the archbishops succeeded in gaining extensive territorial rule for their office , which encompassed about a third of the diocesan area. There were always disputes with neighboring princes. The relationship between the archbishop or cathedral chapter and the Bremen council was ambivalent. The Gelnhauser privilege , which the Civitas Bremen placed under the Justitia Imperialis , was granted at the instigation of an archbishop, but several archbishops tried to patronize the city. Later land in Bremen was initially administered jointly, such as the Vieland . Not infrequently, however, the city made pacts with the Counts of Oldenburg against the archbishop. The city had no powers in the actual archbishopric territory. Even before Bremen became formally independent and imperial with the Linz diploma of 1646 , the city and monastery each ruled their own territorial property. The archbishops increasingly chose to stay outside the city, at times in Bücken , but finally definitely in their main castle Vörde , today Bremervörde . Within the walling of Bremen , however, the cathedral freedom remained under archbishop's sovereignty. Since 1500 both the ore monastery and the city of Bremen belonged to the Lower Saxon Empire .

From 1522 the Reformation quickly gained a foothold through the influence of the Bremen cathedral chapter, the majority of which was Protestant. Even the last Catholic Archbishop, Georg von Braunschweig-Wolfenbüttel , in office from 1558–1566, did not oppose the Reformation, but instead even introduced the Bremen Church Ordinance approved by Luther in his other diocese, the Diocese of Verden . After his death, the Bremen cathedral chapter elected several Lutheran archbishops (only administrators according to the Catholic reading ) in succession, so that from 1566 there was in fact a Protestant archbishopric . The Bremen settlement was concluded for Hamburg through the mediation of Emperor Ferdinand in 1561 : The Hamburg cathedral chapter largely renounced its influence on the Hamburg city church, but retained sovereignty over the Mariendom and its income and jurisdiction over the canons. Since then, the cathedral has formed an enclave in Hamburg that was subordinate to foreign powers until 1648 to the (Lutheran) archbishop-administrator of Bremen.

In contrast to the Lutheran territory of the archbishopric, the city of Bremen, including a large part of its land holdings, turned to Calvinism around 1580 . The Rembertigemeinde formed a curiosity , which since its foundation in 1596 included both the Pagentorn , which is subordinate to the city, and the villages of Schwachhausen and Hastedt  , which are part of the monastery , but until these villages were annexed to Bremen in 1803 it was only looked after by urban Calvinist pastors.

In 1667 , the Roman Catholic Church set up the Apostolic Vicariate of the North for the pastoral care of parts of the population who had remained Catholic in the bishoprics that converted to the Reformation and then sooner or later became extinct . In 1824 the Catholics in the area of ​​the former Bremen Archbishopric, which had belonged to Hanover since 1715, were subordinated to the Diocese of Hildesheim , those of the Bremen city area to the Diocese of Osnabrück , which in Bremen still only includes the Catholic communities south of the Lesum.

In the Peace of Westphalia of 1648 the archbishopric as well as the diocese of Verden were finally secularized . Both were declared duchies and placed under the Swedish Crown . They were then jointly administered as the Duchy of Bremen-Verden .