The Archdiocese of Riga ( Latin Archidioecesis Rigensis , Latvian Rīgas arhidiecēze ) is an archdiocese of the Roman Catholic Church in Latvia with its seat in Riga . 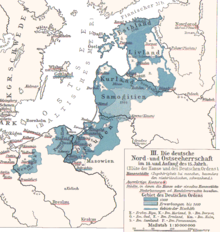 Location of the diocese in the Teutonic Order around 1410

Albrecht von Buxthoeven , who was appointed canon by the Bishop of Bremen to Bishop of Livonia in 1198 , met there in mid-1200 with merchants, missionaries and an army of pilgrims, supported by one of Pope Innocent III. exhibited crusade bull , in the mouth of the Dunes . Twenty kilometers away from this he founded the city of Riga in 1201 and moved the bishopric from Üxküll there. From that point on he held the title of Bishop of Riga. During his mission , Albert was able to build on the preparatory work done by Meinhard von Segeberg . In 1201 he established a permanent bishopric and a cathedral chapter in Riga , for which he elected Premonstratensians . The Order of the Brothers of the Sword , which he initiated in 1202, became a competition for supremacy in Livonia. 1207 which was Diocese fiefdom , and in 1224 the Bishop of king was Philip of Swabia to princes levied. In 1255 Riga became an archbishopric, to which the dioceses Dorpat , Warmia , Kulm , Kurland , Ösel-Wiek , Pomesanien and Samland were subordinate as suffragan dioceses . The Diocese of Reval (now Tallinn) was subordinate to the Archdiocese of Lund .

The diocese possessed a considerable ecclesiastical territory , in which the bishop or archbishop was also sovereign. From 1330 the territory was conquered by the Livonian Order , but the archbishopric retained its spiritual autonomy.

Later the cathedral chapter and the bishop's seat were incorporated into the Teutonic Order .

After 1563 the Roman Catholic Archdiocese became Evangelical Lutheran in the course of the Reformation and continues to exist in this form.

The coat of arms of the historical Archdiocese of Riga showed crook and staff with a clover cross, crossed diagonally gold in red. 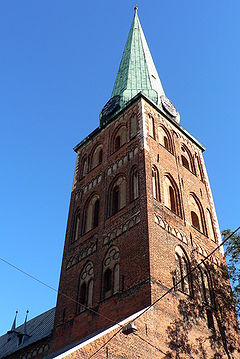 On September 29, 1918, before the Republic of Latvia declared its independence, a new Roman Catholic diocese of Riga was established from the Archdiocese of Mahiljou . The first bishop was the Baltic nobleman Eduard Graf O'Rourke (1918–1920). The diocese of Riga initially only comprised the regions of Vidzeme (Livonia) and Latgale (Latgale).

On August 19, 1920, the parts of Kurzeme (Kurland) and Zemgale (Semgallia), which had been under the administration of the Kaunas diocese, were added to the Riga diocese. The church structures were thus adapted to the state borders of Latvia.

On the basis of the concordat concluded on May 30, 1922 between the Republic of Latvia and the Holy See and a law passed by the Saeima on April 23, 1923 , the former Evangelical Lutheran St. Jacob's Church in Riga was left to the Catholics and became a cathedral of the Diocese of Riga. Thereupon the diocese of Riga was raised to the archbishopric on October 25, 1923 .

Today the archbishopric covers an area of ​​23,587 km². The number of Catholics has been increasing since the 1990s. In 2015 the Archdiocese of Riga had around 223,000 Catholics, which is around 18% of the population. The number of priests, religious and parishes increased accordingly.