This article deals with the ecclesiastical administrative unit. For the historical territory, see the Principality of Warmia

The Diocese of Warmia ( Archidioecesis Varmiensis in Latin , Archidiecezja warmińska in Polish ), which was raised to the Archbishopric in 1992 , is a Catholic diocese in the Polish Warmian-Masurian Voivodeship , on the territory of the former East Prussia with the formerly exempted Principality of Warmia .

Frauenburger Dom - Cathedral of the Assumption and St. Andrew in Frombork 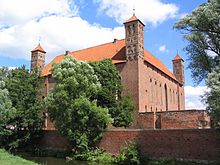 Heilsberg Castle , residence of the Prince-Bishops

The Diocese of Ermland was founded in Prussia, part of the Teutonic Order , in 1243 . It was under the Archdiocese of Riga for about three centuries . In the late Middle Ages, the bishops of Warmia gained secular rule over part of their diocese and thus became prince-bishops . With the fall of the ecclesiastical province of Riga through the Reformation (1563), the Catholic diocese of Warmia was exempted, i.e. it was no longer subject to an archbishopric. The few Catholics in Zambia ( Samland ) were also subordinate to the Warmia prince-bishop. The bishop held the title of Episcopus Varmiensis et Sambiensis (Bishop of Warmia and Samland) and Princeps Sacri Romani Imperii (Prince of the Holy Roman Empire ).

After the first partition of Poland , the Prussian state no longer hindered the exercise of ecclesiastical jurisdiction over the few Catholics in the Kingdom of Prussia . In terms of canon law, however, it was still available to the Grand Masters of the Teutonic Order in the capacity of “Administrator of Prussia”, which reflected a theoretical claim and completely ignored the practical needs of Catholic pastoral care. The bull De salute animarum (1821) made Warmia's diocesan borders along the Russian border congruent with those of the province of East Prussia . There was no congruence of provincial and diocesan borders with the neighboring province of West Prussia. While z. B. Elbing, Neuteich and Tolkemit belonged politically to West Prussia, but on the Catholic side to Warmia, Catholic parishes in parts of the East Prussian districts of Mohrungen, Neidenburg and Osterode were part of the diocese of Culm. The exemption of the Diocese of Warmia was confirmed.

After the Prussian Concordat of 1929, the Diocese of Warmia with the new dioceses Diocese of Berlin and Free Prelature Schneidemühl became part of the new East German Church Province in 1930 under the direction of the newly raised Archdiocese of Breslau . Ermland's Bishop Maximilian Kaller served as Apostolic Administrator of the Free Prelature of Memel from June 1939 until his death, which now has eight Catholic parishes, after the Memelland was annexed to East Prussia in March 1939.

From the beginning of 1945, many residents fled from being conquered by the Soviet Red Army . Bishop Kaller was evacuated on February 7th by order of the SS. The vicar general appointed by Kaller , Domdechant Aloys Marquardt (1891–1972), was expelled by the Polish occupiers in July 1945, before the Potsdam Conference was over. On July 28, the cathedral chapter elected the Olsztyn archpriest Johannes Hanowski as vicar of the capitular .

However, Kaller returned - coming from Halle an der Saale - in the first days of August 1945 to his diocese and took over the official business from Hanowski again. He appointed a vicar general each for the Polish (Franciszek Borowiec) and the Soviet-occupied diocesan area ( Paul Hoppe ; 1900–1988). In mid-August, Primate August Hlond Kaller urged the episcopal jurisdiction in the Polish-occupied diocesan area, but not the episcopal office, to resign, which he did. The jurisdiction in the Polish-occupied diocesan area was taken over by the Apostolic Administrator Teodor Bensch, a Pole from Buk near Posen . Immediately after this resignation, on August 18, 1945, Kaller was expelled into an Allied occupation zone in Germany. The East German ecclesiastical province remained, only in the areas west of Oder and Neisse the jurisdiction lay with the respective diocesan owners, east of which apostolic administrators officiated from September 1, 1945.

Situation after the Second World War

After Kaller's settlement in West Germany, Pius XII. him on September 26, 1946 as the pontifical special representative for the displaced Germans .

After Kaller's death on July 7, 1947, the Warmia cathedral capitulars, who were also expelled into the Allied occupation zones, elected Arthur Kather (1883–1957; until 1945 provost of St. Nikolai Church in Elbing) as the vicar capitular of Warmia, as in Sedisvakanz from the canonical Law provided. The Holy See recognized this choice, so that from then on Kather represented Warmia at the Fulda Bishops' Conference .

After Kater's death, the cathedral chapter elected Vicar General Paul Hoppe on July 29, 1957, as vicar-general , who had been expelled from the Soviet-occupied diocesan area in 1947. Hoppe then represented Warmia in the Fulda Bishops' Conference until Pope Paul VI. on June 28, 1972 ended the vacancy of Sedis and appointed Józef Drzazga as the new bishop. The boundaries of the diocese were rewritten, the Soviet-annexed diocesan area no longer belonged to the diocese. The diocese no longer remained a suffragan of Wroclaw, but became part of the ecclesiastical province of Warsaw. The East German ecclesiastical province was abolished, the German archdiocese of Wroclaw was exempted from the Apostolic Administration of Görlitz , and the German diocesan area of ​​Berlin. From 1972 Hoppe took over the newly created function of “Apostolic Visitator for the Ermland Diocesans in Germany”, which existed until 2011.

The bishop no longer resides in Frauenburg as before , but now in Olsztyn (Allenstein) . Suffragan dioceses are also the newly established diocese of Elbląg (Elbing) and the diocese of Ełk (Lyck) .

Dissolution of the Warmia visitation

On November 17, 2012, the Warmia Association founded the Warmia Family Association. The registered and non-profit association took over the duties of the visitation in November 2013. In pastoral care, the association is largely supported by the Warmia Consistory and the other Warmia priests. In the future, a vom Ermlandfamilie e. V. proposed and appointed by the German Bishops' Conference to accompany the work. Since the summer 2013 edition , the quarterly magazine Ermlandbriefe, previously published by the visitor, has been published by Ermlandfamilie e. V. is responsible.