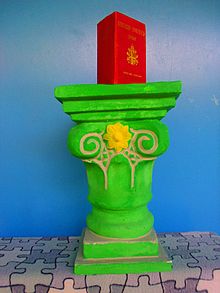 The Annuario Pontificio has been published annually since 1860; from 1872 to 1911 the title was La gerarchia cattolica ("The Catholic Hierarchy") or La gerarchia cattolica e la famiglia pontificia ("The Catholic Hierarchy and the Papal Family ") (GCFP). As the precursor appeared 1716-1859 Notizie or Notizie Pontificie (NotPont) at Chracas (or Cracas).

The yearbook contains, among other things:

The Central Office for Church Statistics is responsible for compiling all statistical information . The book with its red fabric cover has grown over the years to over 2000 pages (2016 e.g. 2466 pages) and can be purchased in the Vatican book trade.

The following quotations are examples of how the function and significance of the Annuario should be presented in a comprehensible and comprehensible manner for a general readership in various media over several decades .

"Anyone, even anyone who has not been baptized, can ... look up every bishop, including their curriculum vitae and telephone number, in the 'Annuario Pontificio' (the 'who is who' of the universal Church)."

“The most important book in the Vatican, the Book of Books in the Papal States, weighs 1320 grams heavier than most Bibles, has more pages - namely 2397 - and is a marvel of precision and perfection. … It is the 'Annuario Pontificio', the… Compendium of the Vatican, at the same time telephone directory, directory of offices, chronicle, statistical yearbook, curious instructions for use and official 'Who's Who'… The work is available for 65 euros from the Vatican Publishing House and is in Cardinal red linen bound, with ribbon bookmark and gold coat of arms on the cover.

All the important addresses, phone numbers and email addresses are listed here. The handy tome begins with a signed rotogravure photo of the Pope and ends with a flirtatious invitation to notify the State Secretariat of any necessary corrections. Of course, that practically never happens. After all, the book has been around for a while. The first edition was in 1716. At that time the Roman printer family Cracas had the idea to publish a yearbook in which the most venerable exponents of the Catholic hierarchy were listed. "

“Anyone who believed, however, with the choice of the name of the Holy Father [ John XXIII. ] and the official eradication of the medieval antipope have solved all numbering problems in the history of the Pope, the recently published 'Pontifical Yearbook for the Year 1961' ("Annuario Pontificio") proved wrong.

This book has not 22, but only 20 real predecessors of the current Pope who used the name John:

Earlier yearbooks had already pointed out these numbering difficulties in the Johannes series. […] Strictly speaking, the current Holy Father would only be the 21st John. In the Vatican, however, one doubts that ... the calculation errors of its predecessors will be corrected.

The main argument against such a correction is that the yearbook editors are reluctant to let their Pope series be shaken and usually only find themselves willing to make changes after centuries.

The Vatican historians have now solved a similar problem for another series of popes: Stephen II , who was elected Pope on March 23, 752, but died three days later, before the consecration, was removed from the series because at that time it was not the election but only the assumption of office that was decisive for the successor to the Pope. The popes of modern times, on the other hand - 'Annuario' editors and historians agree - will be included in the list of the successors of Peter on the day of their election. "

“For many years the Vatican was less docile when it came to recognizing borders: The Roman headquarters noted the formerly German eastern territories in their official 'Papal Yearbook' under the German dioceses.

But that too has changed since last year the Pope withdrew jurisdiction over their GDR parts from the five bishops of the Federal Republic, whose diocesan areas extend into the GDR. He subordinated the episcopal commissioners employed in these areas directly to the Vatican by appointing them as apostolic administrators.

The changes can be read in the 'Papal Yearbook 1974': The apostolic administrators Heinrich Theissing (Schwerin) and Johannes Braun (Magdeburg), who each manage the east German parts of the west German dioceses of Osnabrück and Paderborn, are only given their titular seats Mina and Puzia without any reference di Bizacena: There is no reference to Paderborn or Osnabrück.

Similarly, the apostolic administrator of Erfurt and Meiningen, Hugo Aufderbeck , is no longer named as auxiliary bishop of Fulda, as was the case last year. The Bishop of Meissen, Gerhard Schaffran , no longer works in Germany, as in the 'Annuario Pontificio 1973', but in the GDR. The theological faculty of Wrocław (Breslau) was already under Poland in the last 'Annuario', as was the diocese of Gdansk (Danzig). "