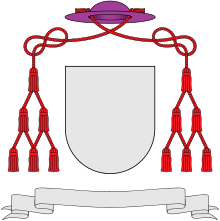 Coat of arms of an apostolic protonotary

As an apostolic protonotary (Latin protonotarius apostolicus ) both certain prelates of the Roman Curia and bearers of a high-ranking papal honorary title are referred to . The name follows from the historical office of the primicerius notariorum in Urbe (Latin: chief of the notaries in the city of Rome ), which is attested as early as the 5th century .

Notaries of the Papal Curia

The actual Apostolic Protonotaries are the notaries of the Pope and the Holy See . Their number is fixed at seven. Together they form a college presided over by the senior apostolic protonotary, known as the dean .

The task of the apostolic protonotaries is to prepare the files and documents on the proclamation of dogmas , canonizations , coronations , seizures, assumption of office and the death of the Pope . They also monitor the proper opening and closing of a conclave and keep records of the consistories .

These actual Apostolic Protonotaries are assigned to the first section of the State Secretariat and are also known as Protonotarii Apostolici de numero .

Moreover, there is a second group Apostolic Proto notaries who Protonotarii Apostolici supra numerum , which this title was awarded honorary. This title is the highest honorary prelate title. As a rule, it was awarded to deserving priests at the request of the responsible diocesan bishop , but this award was very rarely granted compared to other honorary titles.

In January 2014 , Pope Francis ended the award of the title, which he had temporarily suspended shortly after his election . Titles that had already been awarded were retained.

Both classes of Apostolic Protonotaries are members of the Papal Family . As a sign of their dignity, like the papal honorary prelates, they are allowed to wear a black robe with purple piping and purple buttons as well as a purple cingulum and a purple biretta outside of the service . In addition, they have the right to wear the mantelletta , a purple shoulder cape made of silk. In church services they wear the purple choir clothes . In the past, they also had the right to use the pontificals in church services .

In Germany , the correct form of address for an Apostolic Protonotary is “Most Revered Prelate”. The best known German protonotary is Prelate Wilhelm Imkamp .