In Europe and the Mediterranean, the 5th century is part of the late antiquity. The defining development of these decades was the gradual disintegration of the Western Roman Empire and the establishment of successor empires . 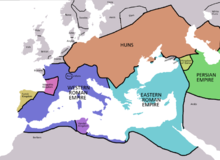