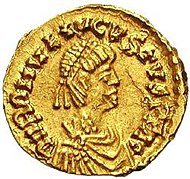 Romulus was named after his maternal grandfather, the Western Roman comes Romulus. He was still a child when his father, the patricius and magister militum per Italiam Orestes , had him proclaimed emperor ( Augustus ) by the troops on October 31, 475 . His official name and title on the coins minted for him was: D (ominus) N (oster) ROMVLVS A (V) GVSTVS P (ius) F (elix) AVG (ustus) = Our Lord Romulus Augustus, the Pious, Happy, Sublime . The first "Augustus" is to be understood as his name and the second as his title. Because of his young age and his insignificance, the young emperor was nicknamed "Augustulus" ("the emperor ") and "Momyllus" ("the little eyesore") by the political opposition .

Romulus was far too young and inexperienced to rule the Western Roman Empire himself. During the whole of his reign he was only a puppet whose strings Orestes held in his hands. Remarkably, he had decided not to become emperor himself, since the post of army commander had evidently appeared to him to be more important than the throne. Against Orestes and Romulus, however, there was still Julius Nepos , the Western Roman emperor, who had fled Rome to Dalmatia around two months before Romulus was proclaimed emperor . From this province, however, Nepos still exercised considerable influence, perhaps more than Orestes or Romulus, because, unlike Romulus, he was officially recognized by the Eastern Roman emperor. The sphere of influence of the western Roman government under Orestes was largely limited to Italy.

Because the crisis that brought the Western Roman Empire to an end had begun decades earlier. The leaders of the mostly Germanic warrior associations had used endless civil wars in West Rome as an opportunity to break away from the central government and finally to establish their own empires (see Migration and Late Antiquity ). In the course of the 5th century, Westrom had increasingly become a state ruled by (Roman as well as “barbaric”) generals, in which the civil administration and the emperor hardly had any real power.

When, after the putsch of the Roman general Orestes, his Germanic foederati demanded land in Italy and Orestes refused to do so, an open rebellion broke out on August 23, 476. Orestes was beaten and killed five days later. The leader of the rebels was the high officer Odoacer , son of Edekon , who had once served the Hun Attila , and a skiress ; Odoacer had served under Ricimer . He marched into Ravenna at the beginning of September 476 and deposed Romulus on September 4th, banished him from Ravenna to an estate near Naples ( castellum Lucullanum ) and sent the emperor's insignia to Ostrom with the remark that in Italy you no longer need your own Augustus , but submit to the emperor in Constantinople.

Since the Western Roman Empire was thus abolished, Romulus - unlike earlier overthrown emperors - posed no danger. He was therefore not killed, but received an annual pension of 6,000 solidi . When he died is unknown. Cassiodorus reports in his Variae about a gift from Theodoric the Great to a Romulus (between 507 and 510); however, it is unclear whether this is Romulus Augustulus.

The end of western Rome

After Romulus was deposed (September 476), Odoacer had his (mostly Germanic) soldiers proclaim him King of Italy (Latin: rex Italiae ) and was initially recognized de facto as regent by the Eastern Roman Emperor Zenon . Julius Nepos, whom Zenon still officially regarded as Emperor of the West, still exercised influence over the empire from Dalmatia, but he was assassinated in 480 and Odoacer now had sole rule over Italy. It was not until 488 that he broke with Zeno.

According to the traditional view, the deposition of 476 sealed the fall of the Roman Empire in the West, as Marcellinus Comes noted about 40 years later, even if it was not the end of antiquity , as was often assumed in older research (cf. late antiquity ). According to some historians, Westrom survived the year 476, as the Senate and the court in Ravenna, like the Roman administration of Italy, continued to exist for several decades.

Nevertheless, 476 marked a turning point: the decisive factor was that Odoaker had no longer found it necessary to appoint a (puppet) ruler (his predecessors, especially Ricimer, had still proceeded in this way), but had effectively abolished the office of Western Emperor, which expressed himself in two things: on the one hand in the fact that he let Romulus live, on the other hand by sending the insignia of the Western Roman Empire (the ornamenta palatii ) to Constantinople. According to the historian Malchus of Philadelphia , Odoacer's envoy expressly stated to Zenon that the West no longer needed an emperor of its own, that Augustus in the East was now sufficient for the entire empire.

476 Thus ended the Western Roman Empire (whether in this year Western Rome ended, as has been said, controversial). The Eastern Roman (or Byzantine) Empire, on the other hand, survived the crisis of the Great Migration for almost a millennium and did not end until 1453 with the conquest by the Ottomans .

The last emperor of Rome is the main actor in the "unhistorical historical" comedy Romulus the Great by Friedrich Dürrenmatt .

Valerio Massimo Manfredi dedicated the novel L'ultima legione to Romulus Augustulus , which was filmed in 2007 under the title The Last Legion .