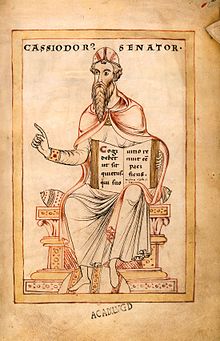 Cassiodorus came from an old and highly respected family of the senatorial imperial aristocracy , which before his time had already provided important officials in the two capitals of the Roman Empire, Rome and Constantinople . The family, whose origins lay in the Syrian province of the empire and which had made it considerably rich, later owned extensive lands , especially in southern Italy (near Squillace , Calabria ). The great-grandfather, the grandfather and also the father, who were all also called Cassiodorus, held - like himself later - high state offices. A fragment from a lost work of Cassiodorus, the so-called Anecdoton Holderi , briefly describes his career.

Cassiodor's great-grandfather had done a great job defending the coasts of Sicily and southern Italy against the navies of the Vandal King Geiseric , who lived in Carthage . The grandfather of the same name was a tribune under Valentinian III. been; he had worked with the Roman army master Aëtius and had been sent together with his son Carpilio as a negotiator to Attila when he threatened Italy. Cassiodor's grandfather later retired to Bruttium , where the family owned their lands.

After his father had served Odoacer and the Ostrogoth king Theodoric one after the other , Cassiodorus was appointed quaestor sacri palatii in the Italian Ostrogothic empire in 507 at a disproportionately young age . In this function he was responsible for drafting the official letters in the stylized Latin language of the office. He also functioned in other high offices, such as corrector Lucaniae et Bruttiorum and magister officiorum (523 to 527). Since the state infrastructure of Italy had remained intact, all of these late Roman offices were also retained by the Ostrogoths after their conquest of Italy (from 489). There was occasional tension between the Goths and the Romans. Cassiodorus was instrumental in promoting reconciliation between the two groups. In 514 he was also consul ordinarius . After Theodoric's death in 526, Cassiodorus headed the civil administration of Italy under the reign of his daughter Amalasuntha as praefectus praetorio and patricius (533 to 537). After the confusion of the throne after King Athalaric's death and the beginning of the Eastern Roman reconquest of Italy (see Justinian and Gothic War (535–554) ) he withdrew from state affairs around 540. He then stayed for a long time in Ravenna and Constantinople . His plan agreed with Pope Agapit to found a Christian theological college in Rome, like the school of Nisibis in the east, could not be realized (due to the turmoil in Italy during the Gothic War) and went back to southern Italy.

In 552 the Ostrogothic kingship was extinguished, and in 554 Italy was again placed under direct imperial rule. At the age of almost seventy, Cassiodor founded the monastery-like educational institute Vivarium (more correctly: Monasterium Vivariense , as it was called by Cassiodor himself) on his father's inheritance on the beach of the Gulf of today in Squillace in Calabria , which owes its name to the numerous fish tanks that had been hollowed out in the rock there. In the older literature it was often assumed that he himself entered the monastery as a monk and became abbot there . This assumption is based on written statements by Cassiodorus, which, although they can be interpreted in this sense, do not allow any reliable and unambiguous conclusion. He repeatedly speaks of his conversio , which occurred after the end of his political career. In the foreword to his great commentary on the Psalter it says: "May God show us the grace that we furrow our Lord's field, like tireless draft animals, with the ploughshare of observance and monastic exercises." He also calls the monks several times "my monks" ( monachi mei ). It is also known that he made it the duty of the monks to copy manuscripts he had collected himself, which made him the savior of important writings and thus a mediator between antiquity and the Middle Ages. As a result, he should have been authorized to give instructions to the monks.

However, passages of his works also allow the conclusion that he may have lived outside the monastery. He differentiates clearly between his private library and the monastery library. In recent research, therefore, the view that Cassiodorus was never an abbot or a monk has largely prevailed. With the foundation of the monastery, which was based on the monastic writings of Johannes Cassianus , Cassiodorus apparently pursued the goal of giving Latin- Western Roman monasticism a similarly well-developed theological basis as the Eastern Roman-Greek already had (see also School of Nisibis ) and thus prepared the basis for scientific activities in the monasteries, as can be seen from the holdings of their libraries. 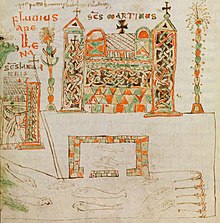 At the end of Late Antiquity, considerable parts of ancient Latin literature had already been lost in the western part of the Roman Empire ; especially the Gothic War from 535, which had devastated Italy badly, had once again led to dramatic losses. Cassiodorus' outstanding achievement is therefore that he - alongside Boëthius and Martianus Capella and in succession to Quintus Aurelius Symmachus and Quintus Aurelius Memmius Symmachus - received important literature and educational material from antiquity and conveyed it to the Latin West of the early Middle Ages . Knowing the manuscripts of ancient literature, he wrote, among other things, a literary guide in his text Institutiones divinarum et saecularium litterarum , in which he recommends both scholarly writings from antiquity and writings from the Church Fathers and the Bible, and instructions for carefully copying religious and expressive texts also profane manuscripts based on reliable templates and declared their reproduction and collection to be the task of the monks. He had the transcripts and their templates archived and combined in a library. In addition, translations and excerpts were prepared, which, in view of the increasing dwindling Greek education in the Latin-speaking West, was a crucial prerequisite for the transmission of Greek literature in the West. His most important students were Bellator , Mutianus Scholasticus and Epiphanios Scholastikos , whose Latin Historia ecclesiastica tripartita, based on the Greek church historians Socrates Scholastikos , Sozomenos and Theodoret , became widespread.

Cassiodorus is also considered to be the creator of the Christian medieval curriculum. With his institutions as a study regulation he created one of the constitutive requirements for the occidental school. The didactic intention was aimed at an awareness of the systematic connection in a synthesis of pagan science and Christian faith. He saved the classical studies in the first Western curriculum in the monastery. After the dissolution of the monastery seminary in the newly created occidental cultural area, the institutions experienced a consecutive tradition in various forms of the school.

Cassiodorus wrote numerous writings. For example, a brief and unproductive world chronicle ( Chronica , see Chronicle (Cassiodorus) ), which extends to 519 and is particularly important because of the consular dating, has survived. His Variae (epistulae) collection , which includes 12 books, has also been preserved. The collection was probably made around 538 by Cassiodorus and contains over 400 administrative letters that give important insights into the administration of the Ostrogothic kingdom. It includes letters and edicts of the Ostrogoth kings in Italy, as well as documents and decrees of Cassiodor in his function as praefectus praetorio . In most cases, the letters were drawn up by Cassiodor in a highly rhetorical style and are often enriched with digressions of ethical or cultural-historical content that go far beyond the occasion.

Cassiodor's work History of the Goths ( Historia Gothorum ) in 12 books, which he started on behalf of King Theodoric and completed under Athalaric , has been lost. However, it was available to Jordanes for a few days (according to his own statement), who used it as a source for his summarizing historical work Getica . There have long been research problems associated with Jordanes' reference to Cassiodor's history of the Goths . It is unclear to what extent the abridged version prepared by Jordanes is ultimately based on Cassiodor's work. Modern research assumes that the prehistory of the Goths was idealized by Jordanes and partially enriched with fictional elements.

Based on the enarrations in the Psalmos of Augustine, Cassiodorus also wrote his most influential work of the Middle Ages, a theological interpretation of the Psalms , instructions for studying the Bible and grammatical writings. When he was 93 years old, he wrote the last text De orthographia , a compilation of Latin orthography based on the works of eight grammarians. The font is considered valuable because it contains extracts from lost works. In the introductory chapter he added a list of his own writings since 540.