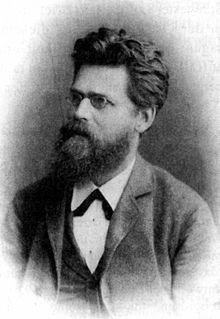 Otto Seeck was born in 1850 as the son of master locksmith and factory owner Friedrich Wilhelm Seeck (1793–1859) and his wife Ottilie, née Hagentorn (1820–1902). He broke off his chemistry studies, which he had initially started at the University of Dorpat , in order to study with Theodor Mommsen at the Friedrich Wilhelms University in Berlin, where he then received his doctorate in 1872 with a thesis on the Notitia dignitatum . He completed his habilitation in Berlin in 1877. With active support from Mommsen, he was appointed to the University of Greifswald as the successor of Theodor Hirsch in 1881 , with Karl Julius Beloch , who had fallen out with Mommsen, who lost out. Mommsen, who on the whole thought very little of the generation of antiquarians who followed him (“the young impotence”), considered Seeck to be the smallest evil, so to speak. He therefore tried to win the support of his son-in-law Ulrich von Wilamowitz-Moellendorff , who was also a professor in Greifswald, for Seeck. Wilamowitz was initially against Seeck's appeal, and Mommsen tried (successfully) to change his mind by writing to him (not without condescension):

“Seeck seems better than all of them; you know that, but you don't want it. He can't speak Greek any more than I can; his Latin is weak, but he is improving; I recently had the first volumes of his editing of the letters of Symmachus before me, some of them were quite good and the madnesses, as in the oratt., were fairly avoided. In spite of everything, he has a natural philolog. Talent at least for that part of the criticism that does not depend on a fine sense of language, knowledge and views on a very narrow and for the Univ. Immediately useless territory, serious will and character. His rugged nature is more bearable to me than the otherwise usual courtship of the young impotence. "

In Greifswald, Seeck was initially an associate professor for Roman history and antiquity. On October 1, 1885, he was appointed full professor. In 1907 he went to the newly founded University of Münster .

Seeck written especially influential work on late antiquity , the Social Darwinist tendency him near one in some Oswald Spengler moved and today primarily from the history of science are visual interest as they have long held great influence. Seeck's extensive main work, The History of the Fall of the Ancient World, is still considered to be the most comprehensive representation of late antiquity in German to date, entirely from the sources. In many respects, however, it is completely outdated and no longer reflects the modern state of research, which has meanwhile revised the extremely negative assessment of late antiquity, as it was practiced by Seeck. His negative view of late antiquity, as Stefan Lorenz believes, was partly due to the regret over a loss of freedom, which Seeck saw in the time of Classical Greece and in the Roman Republic and which, in his opinion, was ultimately recognized as " despotic “understood autocracy was replaced, which ultimately led to the fall of the Roman Empire . In a specialist article, Lorenz criticizes the one-sidedness of the presentation and describes Seeck's characterization of the historical actors as unsuccessful, but at the same time praises what he believes is a comprehensive and precise description of political history.

Seeck, who was considered harsh and difficult in personal dealings, also came out with an edition of the Notitia dignitatum , which is still considered the standard edition. Also of importance are Seeck's over 2,000 articles, especially on late antiquity, in Paulys Realencyclopadie der Altertumswwissenschaft (RE) , many of which are still not completely out of date.

Professors for Ancient History at the Westphalian Wilhelms University