Joseph Mausbach, illustration from the commemorative publication for the 52nd German Catholic Day in Strasbourg, 1905 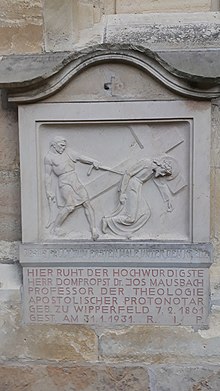 The grave of Joseph Mausbach in the cloister of the cathedral of Münster.

Joseph Mausbach attended the Engelbert-von-Berg-Gymnasium Wipperfürth from 1873 to 1878 and then the Apostelgymnasium in Cologne , where he passed the Abitur. After graduating from high school, he studied Catholic theology in Münster , where he was a member of the academic Catholic student association Unitas -Frisia, where he met Franz Hülskamp , who had a strong theological influence on him. Because of the Bismarck culture war, he had to move to Eichstätt in 1883 , where he was ordained a priest in 1884. In the same year he took over a pastor's position in Cologne. In 1888 he was promoted to Dr. theol. obtained his doctorate and one year later took a position as a religion teacher at the high school in Mönchengladbach .

In 1892 Mausbach was appointed professor for moral theology and apologetics in Münster. In 1899 he was involved in founding the Collegium Marianum , an educational facility for women religious and other female students. In 1912 he was appointed papal house prelate . In 1918 he was also appointed provost of the cathedral .

From 1915 to 1920 he headed the working committee for the defense of German and Catholic interests, which was directed in particular against the anti-German French agitation within the universal church.

Mausbach was a member of the center. He also asked his fellow believers to be more politically active in Germany, which was predominantly Protestant.

Mausbach was a member of the Weimar National Assembly from 1919 to 1920 . There he was a member of the committee for the preliminary consultation of the draft constitution for the German Reich and was particularly involved in the area of ​​regulations that dealt with religion, culture and education. Mausbach saw the effect of denominational schools strengthened by the admission of the introduction of non-denominational schools. He was instrumental in negotiating the Weimar school compromise .

With his statements on moral theology and Catholic social doctrine , he has made a significant contribution to redefining the relationship between the Catholic Church and the Republic , especially in questions of social policy and school policy . With Oswald von Nell-Breuning , one of the most important Catholic social ethicists of the 20th century received his doctorate from Mausbach.

Mausbach made the decisive contribution to the development of moral theology with his reform proposals to cope with the crisis of morality in the first years of the 20th century, with the demand for a relativization of the casuistry and a theological foundation of moral theology in the center. With his Handbuch der Moraltheologie (1918–20), however, he lagged far behind his own proposals, as he himself admitted: He did not see the time for a new draft yet. For almost half a century, however, the reform proposals continued to point the way for Catholic moral theology.