Social policy is the name for measures to improve the economic and social situation, especially of disadvantaged social groups. The main bodies responsible for social policy are the state , along with companies , trade unions , NGOs and the churches .

In the state sector, social policy is one of the oldest policy fields . Its primary goal is to improve the social situation of disadvantaged groups, in particular through an equalization of life opportunities and living conditions. The overriding political goal is the integration of poorer population groups into society and thus the stabilization of the social order .

As a scientific subject, social policy at German universities is thematized by several social science disciplines. Both the profession of social work , the economics and the political science and political sociology analyze the social policies from different perspectives.

In the core area, social policy initially developed the classic systems of social insurance against many of the life risks of dependent employees: illness , old age , accident , unemployment and, relatively recently, the need for care .

In addition, there are many measures that are intended to establish social balance, for example through child allowances , childcare allowances , social assistance and housing benefits .

Outside the direct income redistribution to social policy deals going on family policy , as well as occupational health and safety , protection of tenants and generally in the field of social welfare (formerly poor relief ) for youth services , to integrate disabled people into society and. a. m.

Support of government social policy in the Federal Republic of Germany are the federal government , the states and municipalities , as well as mandated by them, institutions and corporations .

As a result of industrialization and the associated societal changes, the need arose to increasingly establish social security and socio-cultural integration of the population through government action. The migration of large parts of the rural population from the village community to the cities as dependent wage workers harbored the risk of mass impoverishment ( pauperism ) during economic crises , which the traditional poor welfare of the rapidly growing cities ( urbanization ) could not absorb. In addition, the working conditions in the factories were so bad that many of the proletarians had to leave the work process relatively early or after accidents at work .

This social question as well as the growth of social democracy led to the fact that social policy in the empire initially concentrated on the workers , it was only in the Federal Republic of Germany that parts of the self-employed were also included in the statutory social security systems .

The beginning in the empire

In order to avoid direct interference with the internal organization of working conditions (occupational health and safety) and to reverse the growing approval of the opposition Social Democrats and Socialists , Otto von Bismarck introduced the system of social insurance ( health insurance , accident insurance as well as invalidity and old-age insurance) at the end of the 19th century ) regulated by imperial law. Contributions for the insurance in the event of illness and for retirement from working life were paid equally by employees and entrepreneurs, contributions for the employers' liability insurance association were paid by the entrepreneurs alone. Occupational health and safety was expanded, especially with a view to population policy (protection of pregnant women as well as children and young people).

In the years of the German Empire, especially during the First World War , responsibility for social policy developed from the area of ​​the interior ministries to separate authorities or ministries. Social policy was no longer solely a part of state action with the aim of prevention against social unrest .

In the Weimar Republic there was an expansion of social insurance as well as an expansion of social services and institutions in the areas of health care, education and schooling and in the area of housing policy . The German inflation , which led to the impoverishment of people who believed that they are adequately covered by savings for their old age, made it necessary to set up a small retiree insurance. In contrast, the social security of pensioners survived the first years of the Weimar Republic unscathed, albeit with dramatic cuts in the course of inflation. In 1927, after long debates - which had already begun in the German Empire - unemployment insurance was regulated by Reich law. The deflationary policy of Chancellor Heinrich Brüning as a response to the effects of the global economic crisis put large parts of the social security system at risk, and benefits for the sick, disabled and pensioners were drastically reduced by a policy of saving. Although employers had been up against the "overload" of contributions as part of the gross wage since 1928 , the social security system survived this period as well.

At the time of National Socialism , the government initiated, among other things, significant real wage cuts through statutory wage freezes and forced labor measures . However, the government did not dismantle the system as a whole, but also expanded it in a few strategic parts, ideologically reinterpreted and instrumentalized social policy. The social policy of National Socialism was based on the ideology of the “ national community ”. From their time z. B. the legal regulations regarding May 1st as a public holiday ( Labor Day ) and the entitlement to annual leave , which still apply today. The focus of support was particularly on the family in order to increase the number of children and the size of the population for the Second World War . The Social Policy National Socialism was an important policy field to win the population and not to lose their support in wartime.

In the GDR , the term “social policy” was only introduced in the 1960s - before that, the prevailing opinion was that the term was superfluous , since socialism was being built up by the Socialist Unity Party of Germany (SED) . After a comprehensive ideological examination of the term, it finally found its legitimation in the constitution of the GDR for the first time in 1968 : Social policy in the GDR as well as in the other socialist states in Central and Eastern Europe was understood and implemented in a very broad sense. The GDR social policy was clearly aimed at flanking, protecting and stabilizing the socialist social and economic order and its partisan substructure and superstructure. The labor productivity of the working people should be increased by strengthening their motivation. The livelihood guaranteed a minimum supply, which was, however, at a very low level. This also included the consumption policy of the GDR, especially the subsidization of everyday products that came from the public budget of the “ workers and farmers state ”, as well as the setting of tariffs and services.

In the 1970s the " unity of economic and social policy " was invoked. New innovations were the increased promotion of housing construction and the expansion of women's and family policy . Women's and family policy aimed to reconcile motherhood and employment. The company's social policy aimed at leisure and recreation was also upgraded. Growing socio-political importance as protection against material impoverishment of large low-income groups in the GDR gained in the 1970s and 1980s the price subsidies for basic goods as well as for rents and tariffs in local public transport and for gas, electricity and water.

In the Basic Law , the principle of the welfare state is generally laid down in Article 20, Paragraph 1; Welfare state principles can also be derived from individual commandments such as protection of human dignity , social ties to property , protection of marriage and family .

On this basis and supported by an economic upswing ( economic miracle ), the network of social security in the Federal Republic of Germany was further expanded from its foundation until the mid-1990s . Milestones in the expansion of the welfare state were:

The "peace agreement" concluded by Swiss trade unions and employers in the summer of 1937 was on the one hand the basis for an absence of strikes into the 1960s , but on the other hand it led to conflicts moving inside the factories. Dismissals and high turnover became a substitute for strikes and union representation. After 1945, a company social policy assumed the role of “motivating” employees, developing labor reserves and containing conflicts in the company. This included the establishment of welfare funds in the event of old age and illness (which were supplemented by a national insurance system in 1947) as well as canteens and welfare houses with offers such as sewing courses for employees. This company social policy was flanked by innovations taken over from the USA, such as the company suggestion scheme and effective advertising measures to identify with the company. In addition to the USA , however, the operating community propagated in Nazi Germany was also an ideological model: Concepts from the Nazi armaments industry were used in particular to rationalize production processes and in piecework. 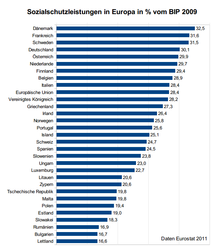 German social policy is just one example of the emergence of the welfare state in developed industrial countries . In many countries, the social security systems against the vicissitudes of life were (and are) financed not only through contributions, but also through the state budget due to their historical development (example: Scandinavian countries, in which, however, a significant part of state social policy outside the Security systems takes place). Other countries have only switched to contribution financing in recent years (e.g. Italy ). A certain degree of harmonization is taking place within the framework of EU social policy , but its further development is difficult to assess.

In Great Britain , the welfare state, which was initially developed in the post-war period, was subject to considerable reductions in benefits in the 1980s under Margaret Thatcher . The associated social model was largely adopted in 1997 by the Labor government under Tony Blair , which placed particular emphasis on mobilizing those affected by poverty and exclusion ("work for welfare" workfare ). A redistribution of social wealth is not the aim of the socio-political model of Great Britain.

The United States decided until the global economic crisis , in the face of hundreds of thousands of impoverished veterans of World War I, to first approach the construction of social security systems ( New Deal ) . Third world states have e.g. Some of them have not even started building such systems.

Wikisource: The workers' social policy (contribution to the status of 1914 in Germany)  - sources and full texts