The Friedrich Krupp AG was a German heavy industry -Unternehmen based in Essen . It emerged from the Krupp family business at the beginning of the 20th century. The official spelling found on stocks, letterhead, etc. was Fried. Krupp AG . By acquiring the majority in Hoesch AG , Friedrich Krupp AG Hoesch-Krupp was formed in 1992 . Since the merger with Thyssen AG in 1999, the company has been part of ThyssenKrupp AG .

Development of the family business 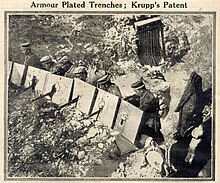 After Friedrich Krupp's death in 1826, his wife Theresia Krupp initially ran the company. Their son Alfred Krupp began the further expansion of the company from around 1830 to become what was at times the largest industrial company in Europe.

After Alfred Krupp's death in 1887, his son Friedrich Alfred Krupp took over . He was married to Margarethe Freiin von Ende and had two daughters with her. He died in 1902 without a male heir. In his will he therefore decreed that the company should be converted into a stock corporation. The older daughter Bertha inherited the company through Fideikommiss at the age of 16 , which should also be binding for the following two generations. Her mother Margarethe represented the heiress in trust until she came of age.

Friedrich Alfred Krupp's will was executed by Ernst Theodor Haux and Gustav Hartmann . The task of transforming the company into a stock corporation mainly fell to Gustav Hartmann, as the Krupp and Hartmann families had a long-term business and family connection. Gustav Hartmann's daughter Elisabeth married Margarethe Krupp's brother in 1891. In addition, Gustav Hartmann had already witnessed the transformation of his father's company into a stock corporation in 1870 ( Sächsische Maschinenfabrik formerly Richard Hartmann AG ). Under his leadership, 160,000 shares were issued in 1903, but they were never traded on the stock exchange: the older daughter Bertha received all the shares except four that went to other relatives and company members, and thus inherited the company.

After her marriage to Gustav von Bohlen and Halbach in 1906, he took over the chairmanship of the supervisory board of Friedrich Krupp AG. In his function as chairman of the directorate for finance from October 1, 1909 to 1918, however, Alfred Hugenberg led the armaments company through the First World War . Hugenberg later became Adolf Hitler's first Minister of Economics and Agriculture in the cabinet in 1933.

During the Second World War Krupp employed slave labor . Due to the constant fluctuation, a total number cannot be determined. The highest number of prisoners of war and foreign civil or forced laborers on a reference date was around 25,000 on January 1, 1943. In the early summer of 1944, after there were no longer any prisoners of war or foreign civilian workers available, Friedrich Krupp AG requested that 2,000 male concentration camp prisoners be assigned to work. This was complied with in June, but instead the company was promised Jewish women who had previously been deported , mostly from Hungary , to the Auschwitz-Birkenau concentration camp . A Krupp delegation from personnel administration and operations management then selected 500 young women aged around 20. In addition, there were 20 so-called prison functionaries . All women were taken to the subcamp Humboldtstrasse of the Buchenwald concentration camp in Essen- Fulerum in August (officially: SS-Arbeitskommando Fried. Krupp, Essen ). The workers were deployed in various Krupp factories.

In 1942 Gustav von Bohlen und Halbach transferred the management of the company to his son Alfried Krupp von Bohlen und Halbach for health reasons . On November 12, 1943, Adolf Hitler passed a special Reich law, the so-called Lex Krupp , with which the group was converted from a stock corporation into a family company with a specially regulated succession . This law enabled the Krupp company (or family) to save 400 million Reichsmarks in inheritance tax .

In 1943, part of Krupp AG's armaments production, which was important for the war effort, was moved to the premises of the Johannisberg machine factory in Geisenheim . In order to compensate for the shortage of workers caused by the war, a satellite camp of the Natzweiler-Struthof concentration camp was built in Geisenheim in 1944 , in which 200 women workers, mostly Polish Jews, were housed. On March 18, 1945, the camp was evacuated and the women were taken to the Allach subcamp near Munich in Dachau .

The detonator factory near Auschwitz , which is occasionally mentioned , was planned by the Krupp company and two million Reichsmarks had already been approved for construction, but from 1943 the Weichsel-Metall-Union Sils and Co. produced there. Instead, detonator production was carried out in Wüstegiersdorf in what was then Silesia with 250 women prisoners from the Auschwitz concentration camp after being relocated from Essen. In December 1944, the Krupp company employed 224 prisoners of war, 1029 foreign forced laborers, and 200 Hungarian and Croatian female concentration camp prisoners here. 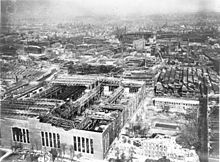 Aerial view of the destroyed Krupp works in Essen, 1945

During the Second World War, large parts of the company premises in Essen were destroyed by Allied air raids on the Ruhr area . To avert and deceive Allied air raids, the Air Force operated a night light system on the Rottberg near Velbert .

After the end of the war, Gustav Krupp von Bohlen und Halbach could no longer be tried as part of the Nuremberg Trials for health reasons. His son Alfried was sentenced to twelve years imprisonment in the so-called Krupp trial in 1948 , as well as ten of eleven managers accused of him. All but one of them were pardoned in the period up to 1952.

During the imprisonment of the designated successor Alfried Krupp von Bohlen und Halbach , his brother Berthold von Bohlen und Halbach temporarily represented the family interests because his father Gustav was bedridden after several strokes and his mother Bertha had given him general power of attorney. When Alfried was released from prison in February 1951, his brother Berthold picked him up at the Landsberg prison gate.

The released sole owner Alfried Krupp von Bohlen und Halbach then wanted to have a confidante at his side who did not belong to the family in the pursuit of his overall interests. Then Berthold Beitz joined the company in 1953 and became the chief representative of the company. After Krupp's death in 1967, the Krupp Group became fully owned by the Alfried Krupp von Bohlen and Halbach Foundation . Berthold Beitz led the establishment of the foundation. From 1970 to 1989 Beitz was Chairman of the Supervisory Board at Krupp, then Honorary Chairman.

On July 17, 1974, the state of Iran under Shah Mohammad Reza Pahlavi took a 25.04 percent stake in Fried. Krupp Hüttenwerke AG . The offer by German banks was rejected in order to circumvent an associated condition of handing over seats on the supervisory board to the banks. In the course of the Islamic Revolution , the US Citibank obtained an attachment order for the Iranian shares in Fried from the Essen District Court in December 1979 . Krupp GmbH. The US bank Morgan Guaranty Trust Company had only arranged for seizures in November .

In 1983 Krupp Stahl AG took over 45 percent of the shares in the steel company Wuppermann in Leverkusen .

In 1990 Krupp Stahl AG bought VEB Kaltwalzwerk Oranienburg from Treuhand , but closed the operation again in 1993.

Mergers with Hoesch and Thyssen

In 1986, Berthold Beitz called Gerhard Cromme to make preparations for the merger of the companies of the industrial dynasty Krupp under the company ThyssenKrupp AG . In 1992 Fried. Krupp AG after the hostile takeover of Hoesch AG on October 10, 1991 to Fried. Krupp AG HoeschKrupp . ThyssenKrupp AG was finally formed in 1999 from the merger of Thyssen AG with Friedr. Krupp AG HoeschKrupp.

In 2004, under pressure from the USA, the Iranian holding company Ific reduced holdings in the now merged ThyssenKrupp AG from 7.8 to 4.5 percent and bought them back at four times the market value at the time. The Iranian foreign trade envoy Mohammad-Mehdi Navab-Motlagh was no longer nominated for re-election to the supervisory board in January 2005.

In 1920 the Dresden company Ernemann formed an interest group with Fried. Krupp AG. The resulting "Krupp-Ernemann Kinoapparate AG" dealt with the manufacture and sale of film projectors . The previously used Ernemann trademark , the goddess of light, was replaced by a three-part Maltese cross gear on the three Krupp rings.