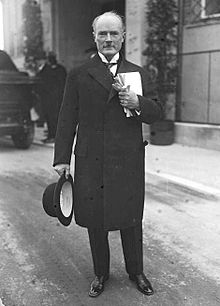 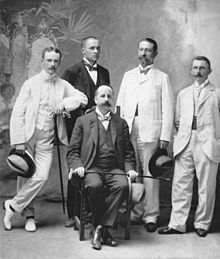 He was one of the 24 people charged in the Nuremberg Trial of the Major War Criminals before the International Military Tribunal . He was charged on all four items, but the case was dropped on health grounds.

Gustav von Bohlen und Halbach was born in 1870 in The Hague, the Netherlands, as the fifth of seven children of the German diplomat Gustav von Bohlen und Halbach . He attended the Grand Ducal Gymnasium in Karlsruhe and graduated from high school there in 1888. He then studied law and received his doctorate in 1893 in Heidelberg to the Dr. jur. After initially working in the Baden civil service, he became an assessor in the Foreign Office in Berlin in 1897 . Two years later, he went to the Embassy in Washington, DC , United States , as Legation Secretary , and later to Beijing , China . From 1904 he was a legation councilor at the Prussian embassy to the Holy See .

Through the mediation of Kaiser Wilhelm II , he married Bertha Krupp in 1906 , the sole heir to the Krupp company , with whom he had eight children:

The prefix Krupp was only used on official occasions such as receptions and meetings that were related to the company. Privately and also within their family seat, the Villa Hügel , they were only called Mr. and Mrs. von Bohlen by the numerous servants , even that and Halbach were omitted. Gustav Krupp von Bohlen und Halbach was nicknamed Taffy within the family. Private family life took place outside Essen in the summer at Blühnbach Castle in the province of Salzburg , which the family had bought in 1916. Gustav von Bohlen liked to hunt there , sometimes with official guests of the Krupp company.

After Gustav Krupp von Bohlen und Halbach joined the company management, he expanded the social facilities of Krupp AG from 1908. This earned him a reputation as an entrepreneur with a sense of social responsibility for the workforce and became very popular. In 1909 he became chairman of the company's supervisory board, and in 1910 a member of the Prussian manor house and the Kaiser Wilhelm Society .

In 1913 he came under public pressure in the Kornwalzer scandal , because officials of the army administration were bribed to get information about the competitors of Krupp AG.

In the course of the occupation of the Ruhr by France in 1923, Krupp von Bohlen and Halbach and eight directors of Krupp AG were arrested, sentenced by a French military court and imprisoned for seven months until the Reich government under Chancellor Gustav Stresemann gave up the policy of passive resistance. Due to the occupation of the Ruhr, the already weakened production of Krupp AG suffered further severe impairments. Since Krupp von Bohlen und Halbach was also hesitant to implement rationalization measures, the global economic crisis hit the company particularly hard in 1929.

In 1924 Krupp von Bohlen and Halbach became president of the supervisory board of the bank for German industrial bonds, the so-called " Dawes-Bank " (cf. IKB Deutsche Industriebank ). From 1931 to 1934 he was President of the Reich Association of German Industry . From 1911 (since the establishment of the KWG) until 1937 he was a member of the Senate of the Kaiser Wilhelm Society (KWG), after which he was an honorary senator. In 1933 he was awarded the Harnack Medal of the Kaiser Wilhelm Society .

Krupp and the Third Reich

Gustav Krupp von Bohlen und Halbach had initially been aloof from National Socialism . In January 1932 he had not given a lecture by Hitler to the Rhine-Ruhr industrialists and refused to give money to the NSDAP. He also campaigned publicly for the re-election of the Reich President Paul von Hindenburg . But after the seizure of power, he adapted more and more to the new authorities, i.e. Hitler . He said to his daughter Irmgard: "We have to take part in order to save what can be saved." He was among the participants in the secret meeting of industrialists with Hitler on February 20, 1933 , at which campaign aid of three million marks for the NSDAP was promised, one million by himself, as an example as the first. In the same year Krupp financed the Schacht job , which designed an economic program for the Nazis.

In 1933 he was then chairman of the board of trustees of the Adolf Hitler donation of the German economy and in 1937 military economic leader . In 1940 Hitler awarded him the Golden Party Badge of the NSDAP . At the same time, the National Socialists used Krupp von Bohlen and Halbach and Krupp AG for propaganda purposes.

With the beginning of the Second World War , the company experienced a further rapid boom due to the considerable demand for its armaments products. In addition to the regular employees, around 100,000 forced laborers and concentration camp prisoners were used at Krupp AG between 1940 and 1945 .

"The general director Loeser [director at Krupp], a clever, clear-sighted man, told Popitz the other day that the leading people, at the top of course the servile Krupp-Bohlen and the callous, egotistical pincer, both stood Hitler because they believed they were good in this way to earn and to keep the workers on a leash. "

The last years of life

The city of Essen distanced itself from Gustav and Bertha Krupp in 1946, and their honorary citizenship rights were revoked.

Gustav Krupp von Bohlen und Halbach was ill from 1941 and was only able to maintain the company management to a limited extent. After a series of strokes , at the end of 1943 he transferred the management of the company to his eldest son Alfried and retired to Blühnbach Castle . In this context, Hitler issued the so-called “ Lex Krupp ” - at Krupp's instigation - which saved Krupp around 400 million Reichsmarks. Gustav Krupp von Bohlen und Halbach spent the last years of his life from 1945 bedridden and senile in a room in the post house of Blühnbach Castle (the castle itself was now the quarters of the American occupiers), looked after by his wife.

After Gustav Krupp von Bohlen and Halbach's death, he was first buried in the family grave of Bohlen and Halbach in southern Germany. After the death of his wife Bertha in 1957, Gustav's urn was transferred to the Bredeney cemetery.

Charges in the Nuremberg Trial

As part of the Nuremberg trial of the major war criminals, indictments were also brought against Gustav Krupp. The prosecution wanted to use it to symbolically capture the German arms industry. She accused Krupp of supporting Hitler's rise to power and promoting the consolidation of National Socialist rule. Other charges included participation in war preparations and war crimes, as well as crimes against humanity. Due to the advanced physical decline of Krupp, his defense lawyer applied to stay the proceedings against him. The American prosecutor Jackson opposed this by pointing out that Krupp was one of the most powerful and stubborn forces that brought about the war and that the Krupp Group had also made considerable profits from armaments and war. The British prosecution endorsed Jackson's line of argument, while the Soviets abstained and the French voted for the case to be closed.

Because the Americans and British insisted on bringing charges, an international medical commission was commissioned to make a final assessment of Krupp's health. The doctors unanimously came to the conclusion that Krupp was incapable of negotiating. On the basis of this expert opinion, the proceedings against Gustav Krupp were discontinued. The prosecution's motions to try Krupp in absentia or to bring charges against his son Alfried as a substitute were rejected by the judges of the International Military Tribunal in a preliminary hearing.

In the later Krupp trial against the members of the board of directors of the Krupp company, no further charges were brought against Gustav Krupp.